Has the government’s response to COVID-19 changed your outlook at all on social security for millennials and younger generations? How would you project SS into financial plans?

I’ve received variations of this question from readers and my friends a number of times over the years. Many young people assume social security is either a Ponzi scheme or simply not going to be around when they reach retirement age.

I’m more optimistic about this one but I understand why people are concerned.

The Social Security Act was signed by FDR in 1935 as a response to the widespread unemployment and poverty created by the Great Depression. It was also seen as a way to help older Americans feel more secure in their finances.

Retirement is still a relatively new concept so the fact this program isn’t that old in the grand scheme of things isn’t all that surprising. I wonder if the architects of the program would be surprised or relieved to find out how important social security still is for so many retirees.

In 2019, it’s estimated around $1 trillion was spent on social security by the U.S. government which was roughly 23% of the annual budget. That works out to an average of $1,500 a month for retirees or spouses and children of retired workers.

People are living longer and many of the 73 million baby boomers are either already retired, getting ready to retire or planning on retiring in the coming years. That’s going to put some strain on the system.

The social security board of trustees puts out an annual report with updated stats and estimates to show how the program is holding up. They predict by 2034 there will be more retirees taking money out than workings putting it in through payroll taxes: 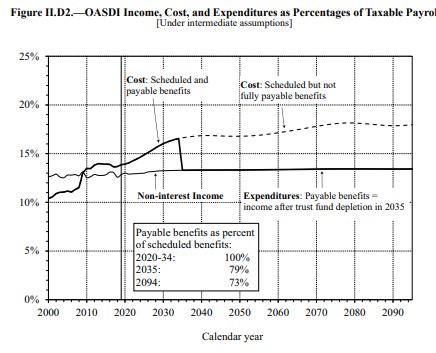 From 1974-2008 there were somewhere between 3.2 and 3.4 workers for every beneficiary receiving social security. By 2035, when the baby boomers generation will largely be retired, they estimate that number will be more like 2.3 workers supporting every beneficiary.

So it’s understandable why millennials would be worried.

There is a social security trust fund but it’s not like it sounds. It’s not like it’s completely gone by 2034. It will still be close to 80% covered by payroll taxes. They even estimated this out to 2094. A lot could change by then but payroll taxes are still estimated to be covering 73% of payouts.

The government could decide to simply cut social security benefits by 20-30% when this happens but I doubt that will happen.

Too many people rely on social security

The Center on Budget and Policy Priorities estimates 3 out of 10 elderly Americans would be more or less broke without the help of social security and more than 10 million elderly Americans have been lifted out of poverty because of the program.

How many politicians in their right mind would ever conceive of cutting benefits for their biggest voting base? It would be political suicide.

There are simple fixes to the program

The government could simply increase the deficit to continue funding social security in the future but there are some simple fixes that could make sense to put it on sounder financial footing.

The way your benefit is calculated is based on how much you earn over the course of your career and the age at which you begin taking benefits. To avoid angering the senior demographic, the government could increase the retirement age for younger people. Or they could adjust the earnings cap or payroll taxes or the cost of living adjustment.

There are a number of levers to pull that would alleviate some strain on the program or the government could always cut back their spending in other areas (Who am I kidding? They’ll probably just pile on more debt).

Government spending is only constrained by political will

The current situation hammers home the point that government spending is not constrained by some line in the sand but by political will. We literally cannot run out of money.1

So the only way social security will not be there for millennials is if the government decides it’s not a priority. The social security trust fund is really just a form of mental accounting.

Again, what politician in their right mind is ever going to try to take away retirement income from their voters?

It’s possible your benefit will be reduced in the coming years or you’ll have to wait a little longer to start drawing distributions but I feel fairly safe telling millennials they can plan on receiving something from social security in retirement.

This is not a Ponzi scheme and the money is not going to run out.

Unless the politicians screw this up (always a possibility) millennials can include social security as a piece of their financial plan.

1I’m not saying we can just spend as much money as we want on anything we want. But if there are important programs that need to be funded, the government can make it work if they want.