Here are some questions I’m thinking about at the moment:

How were stocks up 4% the same day of a record jobless number release? I’ve been preparing for awful economic data but seeing the first unemployment figures from last week was still shocking: 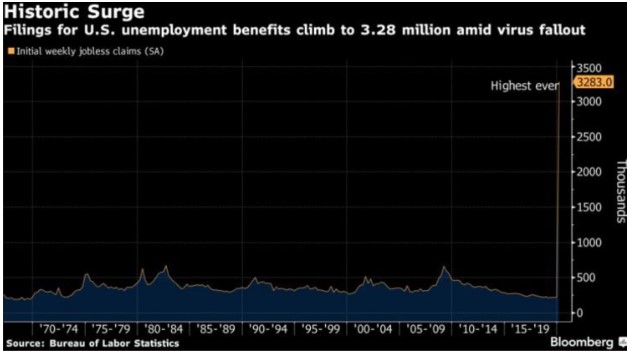 Investors are also trying to calibrate their expectations for how bad this thing is going to get.

Maybe these numbers were better than the worst-case outlook?

Maybe this news was so bad the market realized it will take another round or three of fiscal stimulus to keep people afloat?

Just be prepared for a bunch of days, weeks and even months that don’t make sense in the near future. I have a feeling we’re going to be dealing with fits and starts in the stock market, economy and any semblance of real life for at least the remainder of the year (and potentially longer).

What things will stay the same? This crisis has already changed society in a number of ways. Many people are wondering if some of these changes will have a lasting impact on people’s behavior in the future.

That likely depends on the length and severity of the crisis from here but I like the Jeff Bezos inversion of this question as well.

I don’t see the consumer mindset in America changing because of this. People will still go on vacation. They will still buy clothes and go out to bars and restaurants. Most white-collar work will take place in an office setting because that’s the way it’s always been done.

Maybe I’m wrong but human behavior is one of the few constants in life and I don’t think that changes even under an extreme situation like this.

Michael and I discussed this week on the podcast:

I’m prepared for an unbelievably wide range of outcomes over the remainder of the year.

Will there be a remodeling boom after this? This obviously only applies to people who don’t have their financial lives severely depressed from the crisis but aren’t people going to notice everything that’s wrong about their houses after being cooped up for so long?

I imagine it’s going to take some time to get housing sales moving again as well. It feels like Home Depot and Lowes could be packed when this is all over.

Is High Fidelity the best new show of 2020 so far? I’ve always loved the movie High Fidelity. It was released in 2000 but remains highly rewatchable. I’ve probably seen it at least a dozen times over the years. It’s Jack Black’s best performance ex-School of Rock.

So I was cautiously pessimistic when I saw they were remaking it into a TV series on Hulu.

It worked. They stayed true to the premise of the movie but also added some new touches. Zoe Kravitz was amazing as the John Cusack character. Plus each episode is only a half-hour so this is a perfect binge watch for the quarantine.

If you liked the movie you will like the show.

After Friday’s down day (weird times when a 3.4% down day is considered a merely flesh wound), the S&P is now roughly 14% off the lows.

Many people (myself included) have pointed out in recent weeks how volatility tends to cluster during market downturns, which is why we’ve seen both huge losses and gains during this bear market.

But the other thing to understand about downtrends is the pave the way for a wider range of outcomes, both to the upside and the downside.

I don’t know how investors could be certain about anything at the moment, including the potential of this being a market bottom or a dead cat bounce.

I have no clue and could make the case for both sides of the argument equally. My gut says there’s probably more pain ahead but I don’t invest based on my gut.

My gut has been wrong during plenty of market environments in the past which is why I’ll continue to follow the plan I set about before any of this turmoil hit.

Tomorrow I’ll go through a history of dead cat bounces from some of the worst bear markets to show why it’s so difficult to know just when these things are over.

Further Reading:
Returns From the Bottom of Bear Markets