Some random thoughts as we get a couple of days off from paying attention to the markets:

Will the winner-takes-all only get worse from here? One of the big worries before the current crisis hit, which seems rather trivial at the moment, is the growing concentration at the top of the stock market in just a handful of companies.

The thinking was companies like Apple, Amazon, Google and Microsoft were becoming too large, powerful, and expensively priced. Once these overpriced companies fell they would take the market down with them.

Well, the opposite has happened during this bear market. These stocks are all holding up really well, substantially outperforming the broader market in some instances (hello Amazon): 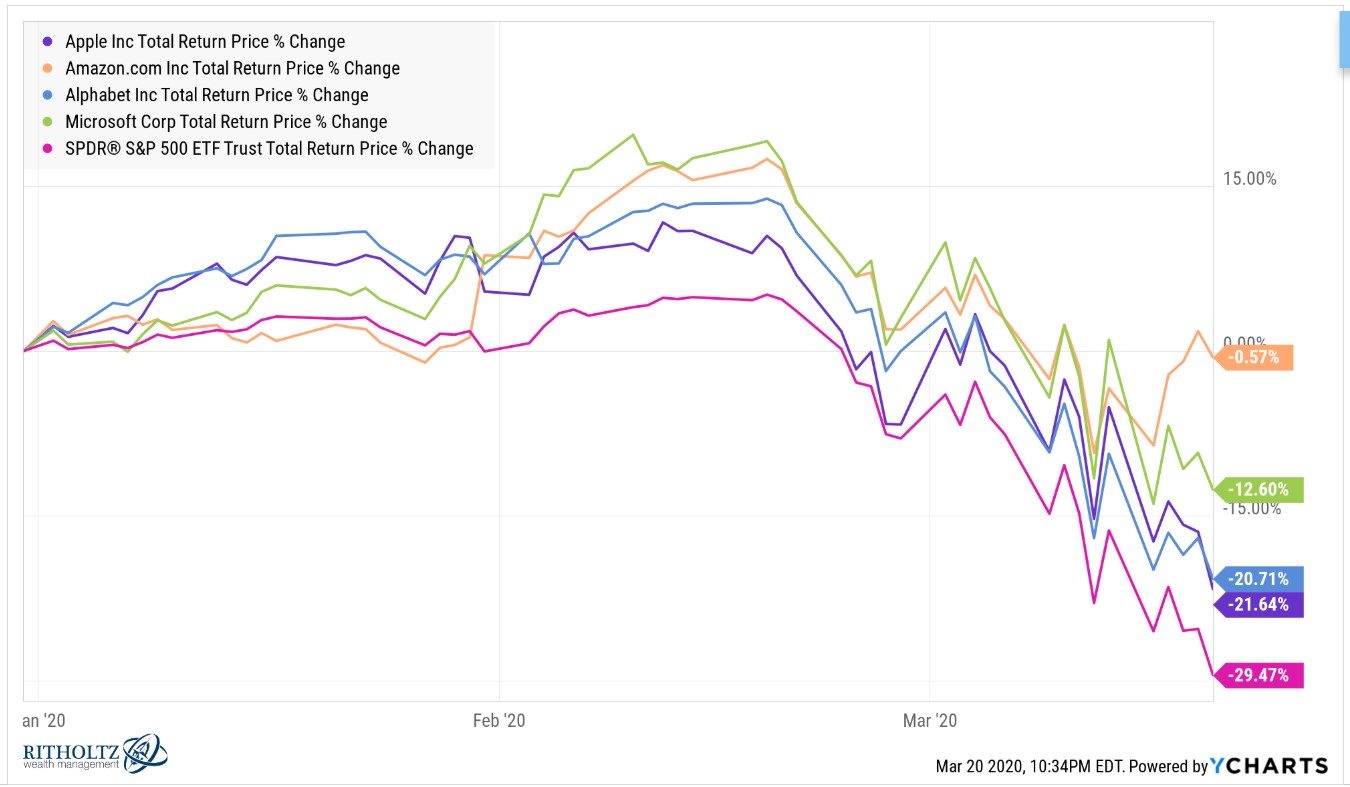 The stocks that do well during a downturn typically aren’t the same ones that do well when the recovery kicks in. So who knows what will happen from here with their performance.

But couldn’t you make the case that the biggest, most powerful companies in the world will only strengthen their position in the coming months?

These firms all have massive cash hoards and the ability to weather a slowdown in the economy better than the majority of smaller companies, many of which will be hit the hardest by the coming economic downturn.

I think it’s possible these firms continue their stranglehold at the top and come out stronger than ever on the other side of this.

What an absolutely brutal stretch. The current situation is unique in that nearly all businesses are impacted but I can’t imagine how difficult this for small businesses and start-ups.

I’m worried there could be a number of people who are otherwise blessed with an entrepreneurial spirit who will take the safe route and simply go to work for companies like Amazon, Apple, Google or Microsoft because it’s a lower-risk proposition.

These companies have the resources to survive something like this. Most small companies don’t.

This is a random thought I hope I’m wrong about. I wrote earlier this year about the number of companies that were started during a crisis:

IBM was founded following a brutal three-plus year panic in the late-1800s. UPS was founded in the same year JP Morgan single-handedly saved the banking system during the panic of 1907. General Motors came just a year later. Walt Disney opened up shop for his movie company during a recession in the 1920s. Fortune Magazine was created just 90 days after the market crash of 1929.

The first Charles Schwab branch opened just after the nasty recession of 1973-1974, the very same year a guy by the name of Bill Gates started a little company called Microsoft. Airbnb was started at the depths of the crisis in 2008.

Entrepreneurs and business leaders often need to get creative when euphoria turns into fear and this can create some wonderful business ideas.

Many of the lasting companies and brands have been created during past crises. Hopefully that will be a theme this time around as well (specifically in the science and healthcare fields where we are seeing this crisis play out in real-time).

But I do worry about the potential aftershocks on the psyche of young risk-takers after living through or hearing about so many difficult business environments in such a short period of time.

Concentration can be a killer in retirement. As of the close on Friday, the S&P 500 is down more than 29% in 2020. The dispersion within the index is all over the map though: 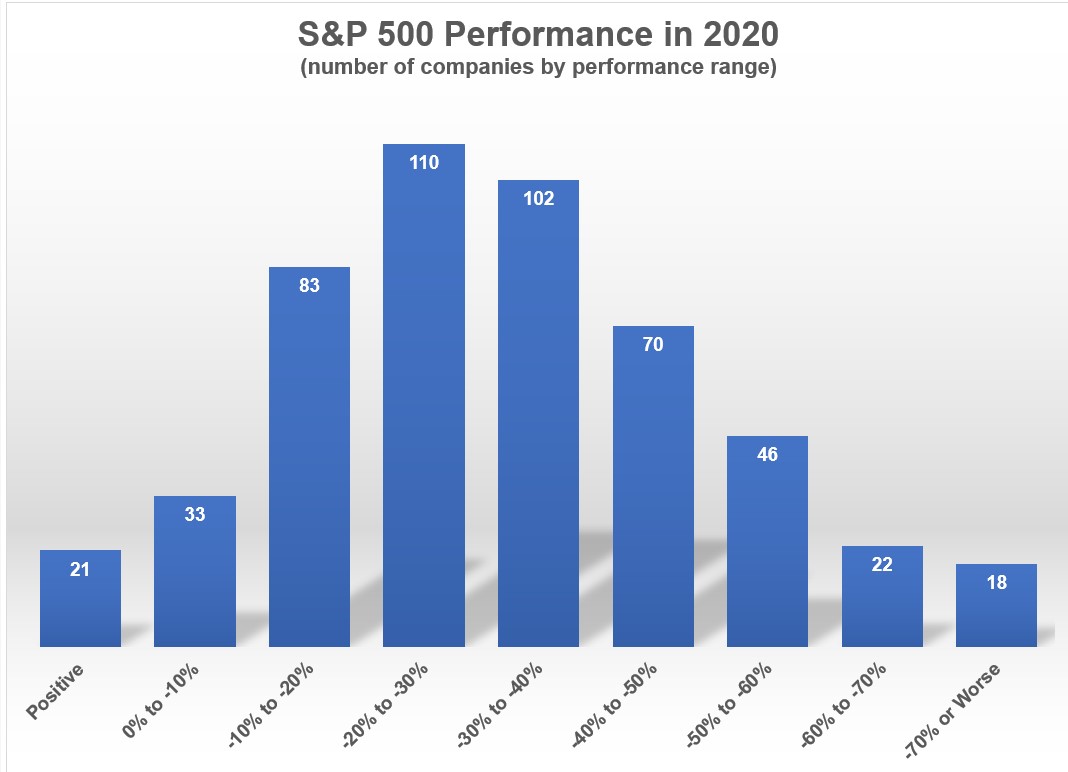 You’ll recognize many of the industries represented here — airlines, cruise companies, casinos and energy stocks — as being the hardest hit. These companies are in the midst of a once-in-a-lifetime downturn.

Michael and I have received a number of questions from podcast listeners about the max amount they should keep in their company’s stock when it comes to retirement. There’s no perfect number but the answer is probably a number low enough that a 70%-80% decline doesn’t ruin your entire retirement plan.

Royal Caribbean is down more than 83%

The first quarter isn’t even over yet.

I’m sure there are plenty of employees who held all or most of their retirement assets in their company’s stock. They’re now living through Great Depression-level losses and who knows if these stocks are ever going to fully recover.

For every Amazon that makes their employees wealthy beyond their dreams, there are always going to be situations like this where companies get destroyed.

Yes, concentration can make you very wealthy if you hitch your wagon to the right company but it can just as easily destroy your wealth if you have too much money invested in the stock.

And the real shame here is the employees who have a high concentration in these stocks are also seeing their companies be decimated in the process. So many of these employees may be laid off at a time when their retirement assets have taken a serious hit.

Who is helping those in financial need at the moment? The majority of the economy shut down in the blink of an eye. Businesses and individuals of all shapes and sizes are going to be impacted.

It’s nice to see people and companies help out where they can in a situation where so many lives are impacted.

Rob Lieber of the New York Times began keeping track of the financial institutions who are stepping up to the plate to help.

A few examples he listed:

I’m hopeful other companies who are able will do the same. If you or someone you know is in financial peril, it doesn’t hurt to ask your creditors for some leniency in the coming months.

How about some good news? I think this whole ordeal will give us a greater appreciation for people and professions that are often overlooked.

I already have much greater respect and admiration for cashiers at the grocery store, the people who refill the supplies and stack the shelves with essentials we need to survive, restaurant workers, the people who cut our hair, stay-at-home parents, and our medical professionals.

These people are on the front lines and the real heroes of this crisis.

It’s easy to take other people for granted when you have your own stuff to deal with. I’m going to work on being more appreciative of those people and services I have taken for granted in the past.

When this is all over I hope we call all do our part to pay these people back for all that they do for us as a society.

Further Reading:
Creating an Overreaction Plan For the Coronavirus