This week the Congressional Budget Office put out a forecast that the federal budget deficit will hit more than $1 trillion.

According to the U.S. Treasury, federal debt levels are already more than $22 trillion.

A trillion here or there and the CBO is expecting more than $31 trillion in debt by the end of the decade.

The question is when does this matter? When will this situation ever become too unsustainable? Are we really screwing over the grandkids with all this debt?

The first thing to understand about the deficit is the U.S. government is nothing like a household. They don’t need to pay off all this debt down to a zero balance as you do with your mortgage.

The U.S. government has the ability to tax the largest, most dynamic economy in the world along with the world’s reserve currency.

And as long as the economic pie continues to grow we should expect the debt to grow as well.

You can see the growth of both here: 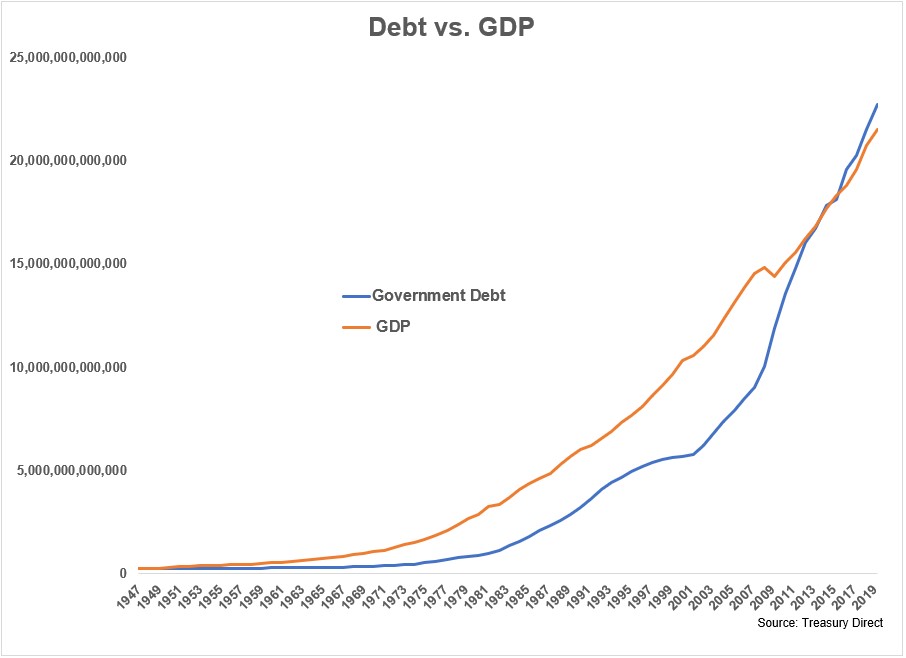 Government debt is just over $22 trillion while GDP is just under $21 trillion. These variables don’t necessarily make for an apples-to-apples comparison but they at least belong in the same fruit basket.

Now here’s debt as a percentage of GDP which is one of the things that worries many economic thinkers: 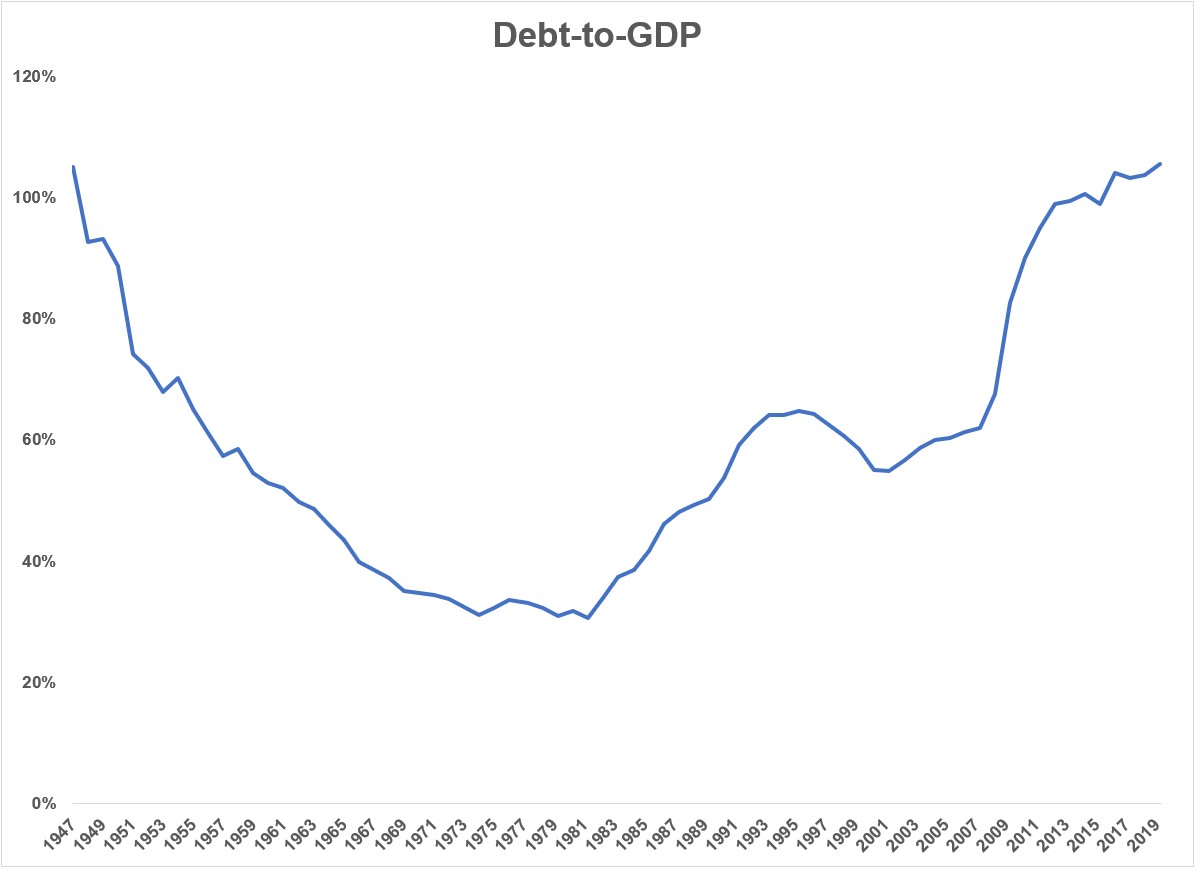 The reason this number was so high at the outset of this chart is because of WWII. We’re not exactly in a situation like that today where it’s completely necessary to borrow and spend as much as possible.

Yet the current economic environment is allowing government officials to do so.

I’m not sure many people would have believed you 10 years ago if you would have told them government debt would grow to more than $22 trillion while inflation would be this low: 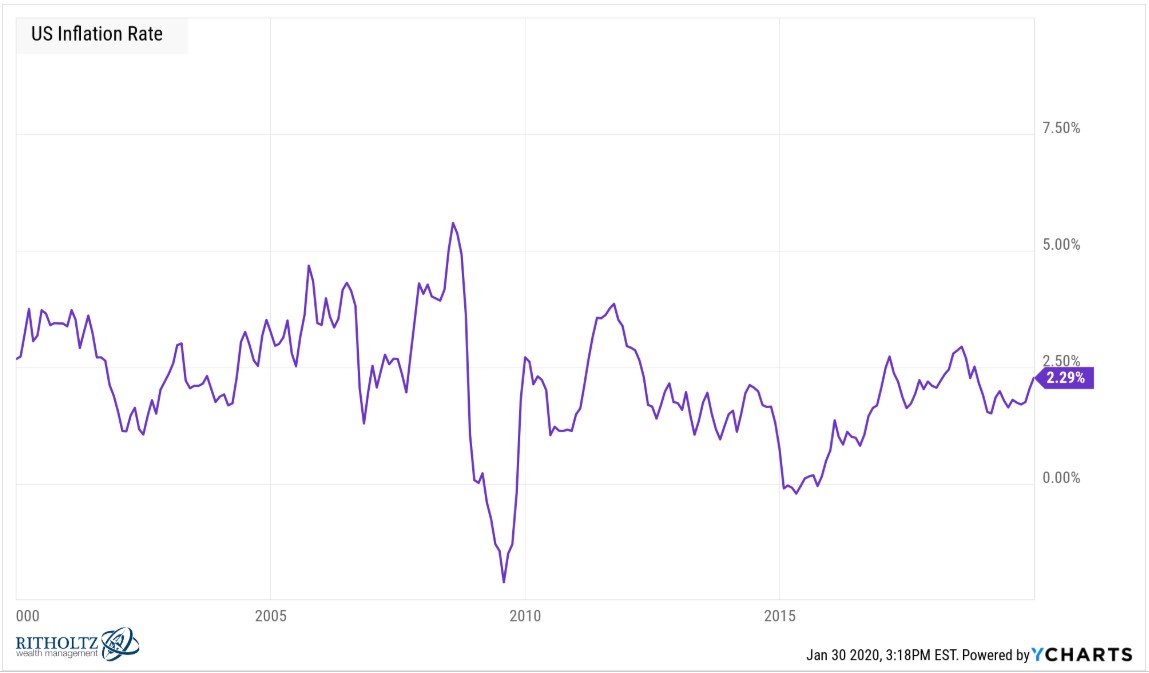 Here’s a live look at government debt and inflation at the moment:

Were inflation begin to rise substantially that would be a good reason to freak out about government debt. Rising inflation tends to go hand in hand with higher interest rates: 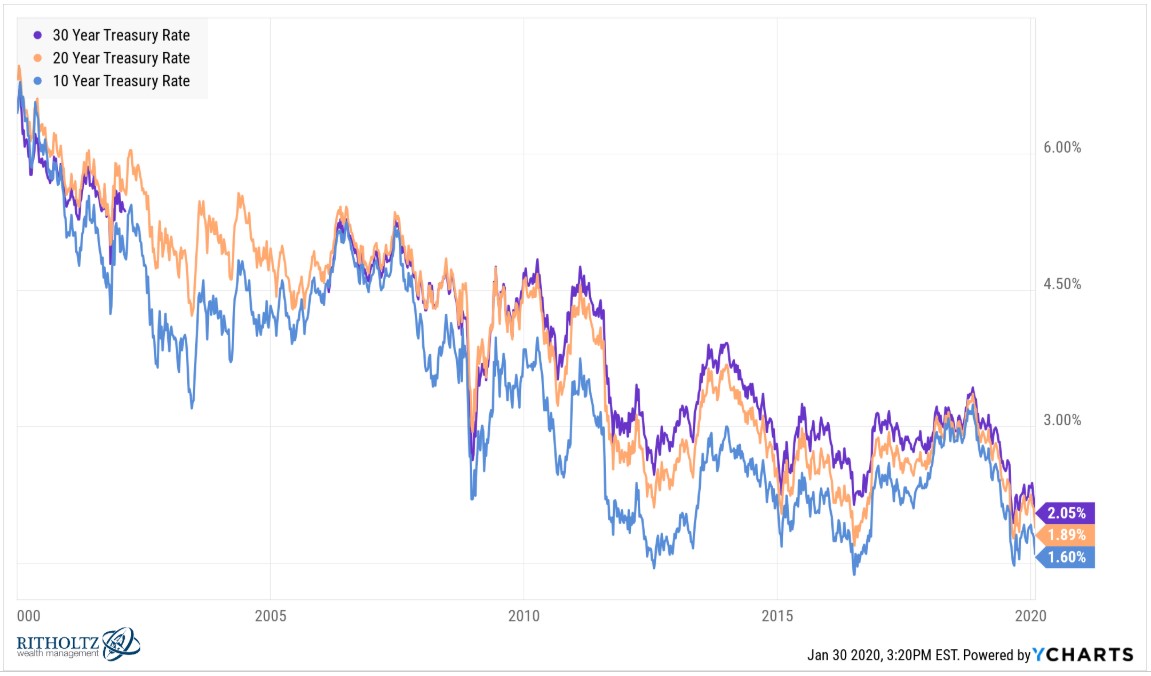 Interest rates can rise for a number of reasons — economic growth, supply and demand for loans, demographics, inflation and a host of other factors. An inflationary rise in rates would be tough to stomach.

The fact that inflation and interest rates have both remain subdued has given the government some breathing room.

While debt-to-GDP at more than 100% seems unsustainable, Japan is an example of a large developed economy where this number can go much, much higher.

Japan’s debt-to-GDP has jumped from 100% to 300% yet their interest expense has actually gone down! It’s now just 1% of GDP because rates there are so ridiculously low (and negative in some cases).

Our interest expense as a percentage of GDP is much higher than this (via the JP Morgan Guide to the Markets): 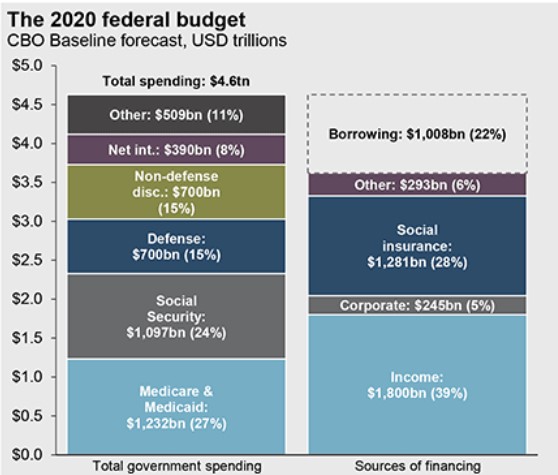 I’m not sure Japan’s scenario of 30+ years of deflation, anemic growth, and falling rates is something we should be hoping for but there is a precedent of a country’s debt growing to unimaginable levels that didn’t trigger a massive crisis.

I don’t believe there’s some line in the sand level of government debt where people all of the sudden become overly concerned about the deficit. I don’t foresee these trillions of dollars ever being repaid in my lifetime because closing out those liabilities would have an immense impact on the asset side of the equation.

Remember that this government debt is also an asset, not only for a number of other countries but for investors in government bonds.

I would become worried about the deficit when (if?) inflation rears its ugly head.

Ironically a recession probably would have some stabilizing effects on the deficit. While the government would likely have to increase spending to make up for a loss in consumption, interest rates tend to fall during an economic downturn, providing a potential cushion in bad times.

Could there be a massive crisis of confidence in the U.S. because our government debt gets out of hand?

That certainly is a possibility. Our system is based on faith as much as anything in some ways.

It is also possible that debt levels continue to rise with no major ramifications to the economy?

Yes, as long as inflation and interest rates stay low.

Is it possible the government is misallocating the capital they’re spending/borrowing?

Yes, it would be comforting if more of this money was investing in our future.

Is there a limit to the amount of debt we can sustain as a country?

I’m not really sure I would like to give this one a try.