In my new book Don’t Fall For It: A Short History of Financial Scams (anyone getting sick of me talking about this yet?) I put together a list of 8 conditions that tend to be present when financial fraud flourishes.

They are (in no particular order):

All frauds and scams don’t necessarily hit on every single one of these but this is a decent framework based on my research.

The logical question, which a few people have asked me now, is this: what areas of the markets or financial sphere fit this bill today?

With yields so low and so many people ill-prepared for retirement, there are likely to be plenty of scams that involve guaranteed income payments with a high promised rate of return.

But the obvious answer is cryptocurrencies.

Let’s go down the list to see how many of these crypto hits:

(1) When there’s an expert with a good story. The mystery behind Satoshi, the anonymous founder or founders, along with the anti-establishment/tech-libertarian utopia dream makes crypto the perfect story-based financial asset. Add in buzzwords like cryptography, decentralization, cold storage, blockchain and digital wallets and it’s easy to see how simple it would be to cause confusion here.

(2) When capital becomes blind. Walter Bagehot once described speculation as “the blind capital.” There are plenty of blindfolds in the crypto space as many believe it is their savior no matter what happens. It’s like a religion.

(3) When the banking industry gets involved. This is a case where Wall Street hasn’t really put their foot on the gas pedal which actually might make it easier for fraud to exist in the space. It’s still the wild west in many ways.

(4) When individuals begin taking their cues from the crowd. The run-up in crypto prices following Thanksgiving weekend in 2017 when everyone went home to talk about it with their families was a sight to behold. The herd mentality works in both directions but is ever-present in this space.

(5) When markets are rocking. Bitcoin was up some 1300% in 2017. It was down 74% in 2018. In 2019, it rallied more than 90%. This boom-bust pattern invites bad actors because heightened volatility toys with investor emotions in both directions.

(6) When the opportunity presents itself. There are plenty of doomsayers who made a hard pivot into crypto after their end of the world predictions and anti-Fed takes fizzled out in the stock market. This space is ripe for financial predators looking to prey on the emotions of investors.

(7) When humans are involved. Check.

(8) When innovation runs rampant. This is probably the biggest factor in the crypto story. It’s new and exciting. It’s innovative and hard to understand. And when something is hard to understand, it makes it easier for people to pull the wool over your eyes because they present themselves as a knight in shining armor who can figure out how to make money on it.

Cryptocrime is expanding. Ponzi schemes and other frauds involving bitcoin and cryptocurrencies lured at least $4.3 billion from investors in 2019, according to Chainalysis. That was a bigger haul than the combined $3 billion in 2017 and 2018.

After a boom in dubious initial coin offerings in 2017 and a number of hacks in 2018, Ponzi schemes have become among the most popular vehicles for fraud. The biggest ones have been prolific: Just six well-orchestrated scams were responsible for about 90% of the funds stolen last year, Chainalysis said.

I can’t believe Ponzi schemes still exist but here we are. The number of frauds in 2019 was bigger than the amount in 2017 and 2018 combined: 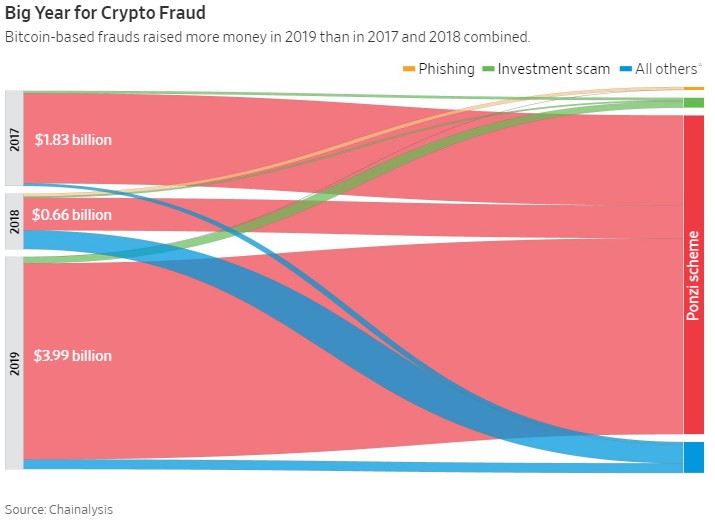 As with most financial fraud, there are stories that are unbelievable yet true. Here’s one that took down a group of Major League Baseball players:

The US Secret Service arrested John Michael Caruso on Jan. 30. Caruso is the founder of Zima Digital Assets, a blockchain and cryptocurrency investment firm, and has dubbed himself the “Michael Jordan of algorithmic cryptocurrency trading.” Authorities arrested Zachary Salter, an aspiring R&B singer who co-founded Zima with Caruso, the same day.

But he was the Michael Jordan of algorithmic cryptocurrency trading! Who could have possibly seen this coming?!

This Ponzi Scheme was “only” $7.5 million but it also involved senior citizens who were impressed with claims of the ability to predict the future using algorithms and “time-tested” strategies. The pair scam artists who pulled this one off were basically broke before finding unsuspecting markets to give them money, which they then used to fund lavish lifestyles:

Most of the money Caruso and Salter took from their customers went not into investments but toward funding their opulent lifestyles, prosecutors say. They each lived in mansions valued at about $9 million. Caruso is the registered owner of a 2019 Lamborghini Urus, and over the last two years spent at least $350,000 to rent, among other luxury vehicles, a Rolls Royce, a Ferrari, and an Aston Martin. Caruso, who also flew to London, New York, Chicago, Los Angeles, Hawaii, Cabo San Lucas and Aruba aboard private jets over the past two years, and has taken about 30 trips to Las Vegas, where he lost more than $1.4 million gambling in a 13-month period.

Here’s another one from the SEC that ensnared a number of doctors1:

The SEC alleges that Michael W. Ackerman, along with two business partners, raised at least $33 million by claiming to investors that he had developed a proprietary algorithm that allowed him to generate extraordinary profits while trading in cryptocurrencies. The SEC’s complaint alleges that Ackerman misled investors about the performance of his digital currency trading, his use of investor funds, and the safety of investor funds in the Q3 trading account. The complaint further alleges that Ackerman doctored computer screenshots taken of Q3’s trading account to create the illusion that Q3 was highly invested in cryptocurrencies and was extraordinarily profitable, holding assets of as much as $310 million. In reality, as alleged, at no time did Q3’s trading account hold more than $6 million and Ackerman was personally enriching himself by using $7.5 million of investor funds to purchase and renovate a house, purchase high end jewelry, multiple cars, and pay for personal security services.

Anytime someone tells you they’ve “cracked the code” or uses a “proprietary algorithm that generates extraordinary profits” you should use extreme care. This is true in crypto, stocks, bonds, real estate, baseball cars, or any investment strategy someone is hawking.

As crypto continues to grow in popularity and gain public mindshare, my guess is this stuff only gets worse. Many more people are going to lose money based on false claims in hopes they’ve struck electronic gold.

The combination of a technological innovation that’s difficult to understand paired with a good story is going to be too hard to pass up for both those looking to commit fraud and those in search of overnight riches.

It’s a perfect mix of innovation, hype, emotions and hope.

I’m still not sure how the whole crypto thing will play out in the coming years. But I can guarantee you crypto fraud will continue to be a growth industry.

Further Reading:
The Man Who Tried to Sell the Eiffel Tower (Twice)

1Based on my research, doctors are one of the more susceptible groups in terms of financial fraud. Physicians are so intelligent they often become overconfident in their investing abilities.