The modern financial system is still in its infancy in many ways. This is why making historical comparisons between now and even 100 years ago or so becomes difficult. Things have changed rapidly in terms of the maturity, size, and scale of the economy.

In this piece I wrote for Fortune, I look at this idea through the lens of comparing recessions to depressions.

The whole idea of “the economy” as we know it today is still a relatively new phenomenon. In fact, the modern concept of gross domestic product (GDP) as a way to measure economic growth wasn’t developed until the aftermath of the Great Depression.

Simon Kuznets, an economist who won the Nobel Prize for his work in this area, put forth a report to Congress in 1934 using a concept called national income to track economic activity. GDP was bourne out of this idea but it wasn’t the standard method used by countries around the globe until the end of WWII.

Once economists were able to measure economic output they could go back to calculate the damage previous downturns had on the economy.

In the 1800s there were 18 recessions in addition to 6 panics or depressions. The National Bureau of Economic Research (NBER) lists the longest GDP contraction on record as 65 months in length which was from October 1873 to March 1879 in what is known as the Long Depression. In comparison, the Great Depression of 1929-1932 was 43 months long.

After a land price boom-bust in the early 1800s, the word panic entered the lexicon and was used to describe speculative economic episodes that resulted in a spectacular collapse. The term ‘panic’ was used for the remainder of the century to describe what is now termed a depression. Government officials decided they needed something that was less alarming to the public which is how the terms recession and depression came to be used to describe economic downturns of varying severity. 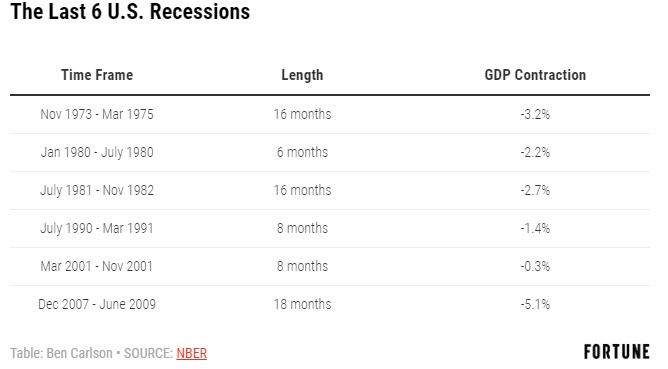 And the past six U.S. depressions (some of which were called panics at the time): 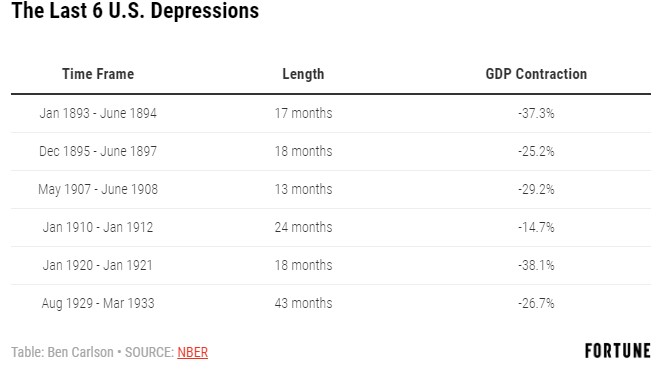 How long do recessions last?

There are pundits and professional investors alike these days who evoke comparisons between today’s economy and what began in the fall of 1929 prior to the onset of the Great Depression. Anyone making Great Depression analogies hasn’t read enough history books. Even the Great Financial Crisis of 2007-2009, which somehow didn’t morph into an all-out depression, looks tame when compared to economic downturns in the pre-WWII era.

There are, however, smaller countries that can find themselves in the throes of a panic or depression. Greece, for instance, saw GDP decline 26% from 2008-2013 and unemployment spike to nearly 30%. Both of these figures were worse than what the U.S. experienced during the Great Depression.

For most individuals, these economic definitions likely don’t matter all that much for their personal situation. A shallow recession can feel like an opportunity for some but a depression for others. It all depends on the context in terms of your job, family, and financial situation.

“The economy” in the United States is worth more than $20 trillion. Our feelings about this massive machine are often swayed by our own personal experiences with it, which is true of both economic expansions and downturns.

Nothing is impossible when it comes to the economy because we have no idea what the future holds but we can say for a fact that the U.S. economy is much more stable now than it was in the past.