Wealth inequality in America seems to get worse by the year. There too many causes for this to name but one of the biggest problems I see is the fact that the wealthy own such a large proportion of financial assets while the middle class mainly owns their home as their biggest (sometimes only) investment.

Here are some thoughts on the widening wealth gap in this country.

Since bottoming on March 9, 2009, the S&P 500 is up more than 500% in total. The stock market eclipsed the pre-crisis all-time highs in 2013 and hasn’t looked back since. Not only have stocks risen 10 out of the past 11 years, but we’re also in the midst of the longest economic expansion in U.S. history with an unemployment rate at its lowest level since 1969.

And yet, despite a decade of good fortune economically the gains have not been handed out uniformly. The gap between the rich and everyone else has only widened during this recovery.

The top 1% have seen the biggest wealth gains by far since Great Recession began in 2007 but this trend has been in place for decades now. The top 1% continues to increase their stranglehold on wealth in this country while the middle and lower class are losing ground. 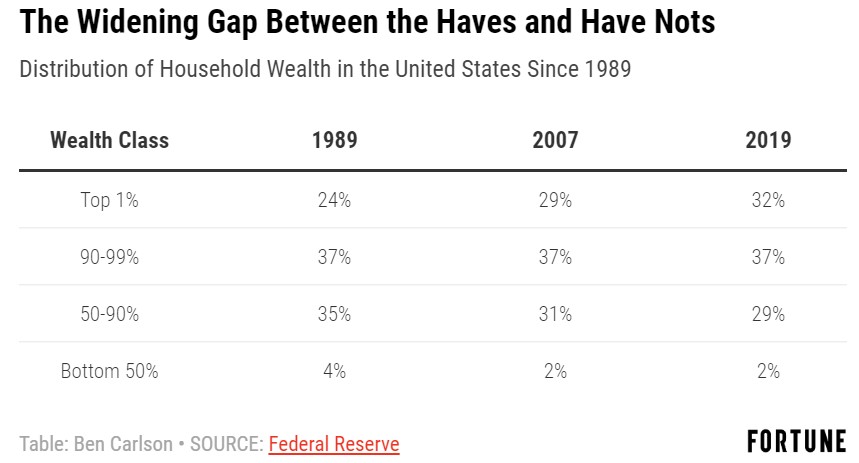 One of the biggest differences between the wealthy class and everyone else is their ownership of financial assets. Data from Edward Wolff shows the top 10% in terms of wealth own roughly 84% of the stock market in the United States. And that number is rising, up from 77% in 2001

Not only do the top 10% own more financial assets, such as stocks and bonds, but they don’t have their entire fortune tied up in their home like many in the middle and lower classes. 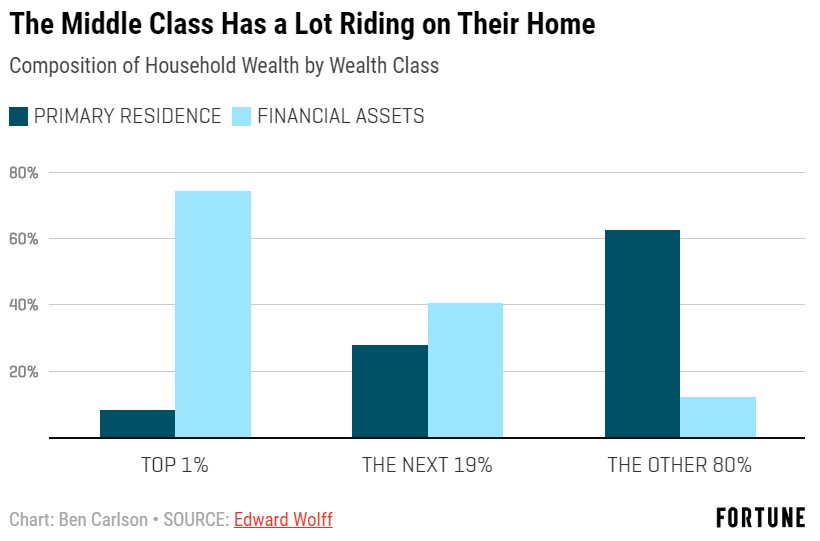 The rich own financial assets while the rest of the population has the majority of their net worth tied up in their home. There are a number of reasons why this disparity has made things difficult on the middle class.

The Great Recession was the worst financial crisis since the Great Depression because falling home prices impacted so many consumers. And the housing market took much longer to recover from its losses than the stock market. 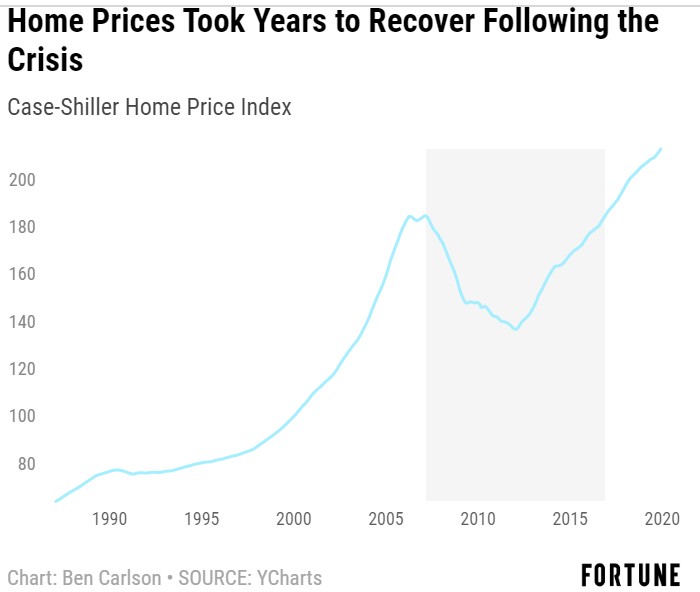 While the S&P 500 bottomed in the spring of 2009, it wasn’t until 2012 that real estate hit its nadir. And while housing has recovered nicely since that time, the Case-Shiller Home Price Index didn’t break even until the end of 2016. It’s only in the last few years that many long-term homeowners have experienced meaningful gains in their real estate assets.

The majority of our debt burden comes from housing

U.S. household debt is roughly $14 trillion as of the latest reading. Nearly $9.5 trillion of that number comes in the form of mortgages (with the rest made up of auto loans, credit card debt and student loans). That means close to 70% of household debt comes from borrowing to buy a house.

The bottom 50% of households by wealth are in debt to the tune of $5.6 trillion. Only around 50% of all Americans have a direct ownership stake in the stock market. This means the bottom 50% has basically nothing invested in financial assets outside of a primary residence but holds around 40% of the total debt load.

While housing can appreciate over the long-term, it’s also an enormous liability on the balance sheet for many Americans.

Housing is a form of consumption

The great myth of the American dream is that buying a home will be the best investment you’ll ever make. Could that be the case? Certainly for those in the right markets at the right time, especially when you consider the leverage involved in owning a home.

But owning a home is not only a liability that slowly turns into an asset but also a form of consumption. You have to pay property taxes. Maintenance and upkeep are required. Designs can go out of style which could require renovations over time. There are also transaction costs involved with the purchase and sale of a home, along with the interest being paid on the loan.

When you take all of the costs into consideration the investment outlook on a home may not be as great as many have led you to believe. Then there’s the fact that you can’t spend your house as it’s an illiquid asset.

I’m not saying homeownership is a bad thing. I own a home myself and it’s been a wonderful decision for my family. But a home is also the most emotional asset you can own. It’s literally the roof over your head, the neighborhood you reside in, and part of the community you live in.

So while becoming a homeowner can provide a certain level of psychic income, it can also be your downfall when things go wrong because it offers little in the way of diversification if you lose your job or run into financial difficulty during a downturn.

Wealth inequality is a problem that has slowly gotten worse over recent decades. Reversing course will take some time as well. Policy prescriptions will likely come in the form of a wealth tax or higher rates on the rich in the future. The rich can afford the best tax consultants to shield all those financial assets they own so I’m not sure how much damage a wealth tax would do to put a dent in this gap.

I would prefer a more dynamic retirement system that makes it easier for more people to take part in equity ownership through the stock market. But short of a forced program, I’m not holding my breath on this one. This is a problem without an easy solution.

Perversely, under the current wealth distribution scenario only a nasty stock market crash would succeed in narrowing the gap between the haves and the have-nots, seeing as the rich own the majority of the stock market. But whichever way the market turns, many lower and middle-class households are going to remain highly dependent on their homes and social security when it comes to funding their retirement.