That means the current risk investors should worry about is becoming too complacent. Here’s a piece I wrote for Fortune with some bull market reminders to avoid complacency risk and understand how these things generally work.

The current bull market could be entering its 12th year or its 8th year depending on who you ask. Some argue this bull began when the prior bear market bottomed in early March 2009. Since then, the S&P 500 is up 10 out of the past 11 years with gains of well over 500%.

Other market commentators disagree, arguing the true start date should be March 2013, which is when the index broke out to new all-time highs, not seen since the market crash began in the fall of 2007.

Regardless of the start date, this bull market has been relentless. Agreeing on the start date may be semantics, but we can all agree that pinpointing when it ends is impossible to do in advance. Until that day comes, here are some reminders about investing during bull markets.

Legendary investor Bernard Baruch offered some advice on this point: “Become more humble as the market goes your way.” Confusing brains with a bull market can be a costly mistake because bear markets don’t care how well you did when markets were going up.

Bull markets can last longer than you imagine

The secular bull market that ended in the dot-com implosion of early-2000 began at the outset of the 1980s. The S&P 500 was up 17.5% annually during the 1980s. It then followed up that magnificent run by compounding at more than 18% per year during the 1990s. That’s a 20-year bull market with annual returns approaching 20% per year.

The 1942-1968 run is much less known these days but you could make the case there was a secular bull market in U.S. stocks during that period. Between 1942 and 1968, stocks compounded at nearly 15% annually. The worst calendar year return was a loss of just 10.8%. That’s a bull market that ran for nearly 30 years!

It’s always more fun when stocks go up but that doesn’t mean past bull markets were easy to ride. In the 1942-1968 time frame there were still drawdowns. By my count there were 16 double-digit peak-to-trough drawdowns in the S&P 500, including five separate corrections of 20% or worse. But stocks never fell by 30% in that entire period.

The same can’t be said of the 1980s and 1990s bull. Stocks fell more than 33% in a week during the 1987 bloodbath. Including Black Monday, there were nine double-digit corrections during this bull market. 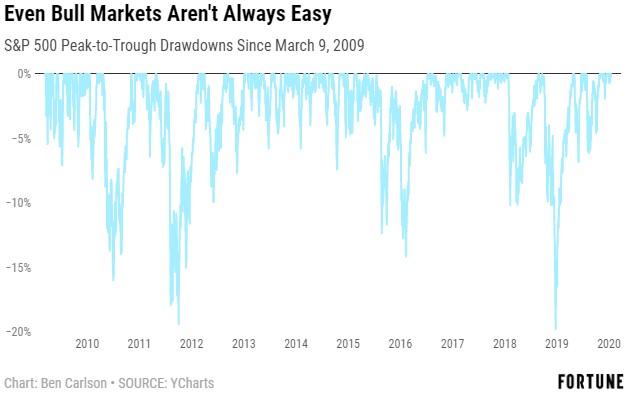 Since 2009, investors in the S&P 500 have had to deal with six double-digit corrections, including two losses of more than 19%. So those gains have not come easy.

No one ever knows what stage we’re in

John Templeton once said, “Bull markets are born on pessimism, grow on skepticism, mature on optimism, and die on euphoria.”

Howard Marks gave a similar description when he wrote about the three stages of a bull market:

Both descriptions are a good way to frame the way sentiment typically works in the market. The only problem is, these variables are impossible to define at the time because they never play out over the same horizon. Alan Greenspan’s famous Irrational Exhuberance speech came at the tail end of 1996, a mere four years before the bubble would pop. In the meantime, stocks rose an additional 115% or so.

That is why it’s impossible to gauge what inning we are in. Human emotions rarely work on a set schedule and they never match up perfectly over different market environments. The pendulum invariably swings too far in both directions but we never know how far or how long it will swing.

Bull and bear market volatility in the stock market tends to look very different. You would assume bull markets are overflowing with big up days while bear markets consist of mainly big down days but that’s typically not how it works.

Bear markets are full of both big down and big up days as volatility tends to cluster. Over the past 15 years of data, eight out of the 10 worst daily returns on the S&P 500 came during 2008 while seven of the 10 best daily returns came that very same year. 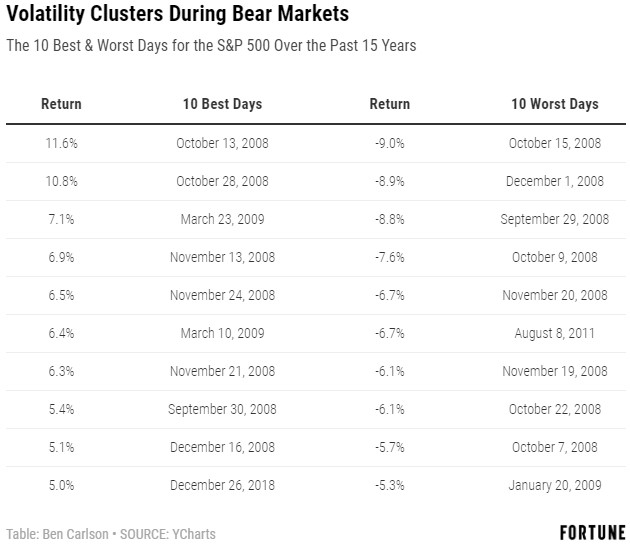 When markets are going down volatility goes up, but it does so in both directions. Bull markets, on the other hand, are slow and methodical. Monday’s 1.6% decline in the S&P 500 was the first move of 1% in either direction since mid-October. There hasn’t been a 2% up or down day since last August.

The methodical nature of bull markets is one of the biggest reasons we see overreactions during the inevitable bear market to follow. Markets that slowly go up blind investors to the fact that sometimes they also go down. And those overreactions are amplified by the fact that no one knows how long the music will continue to play.

So enjoy the bull market while it lasts. Just know it will take a pause at some point and when that happens many investors will sell first and ask questions later.