Apple is up a lot over the past year, more than doubling in terms of total returns: 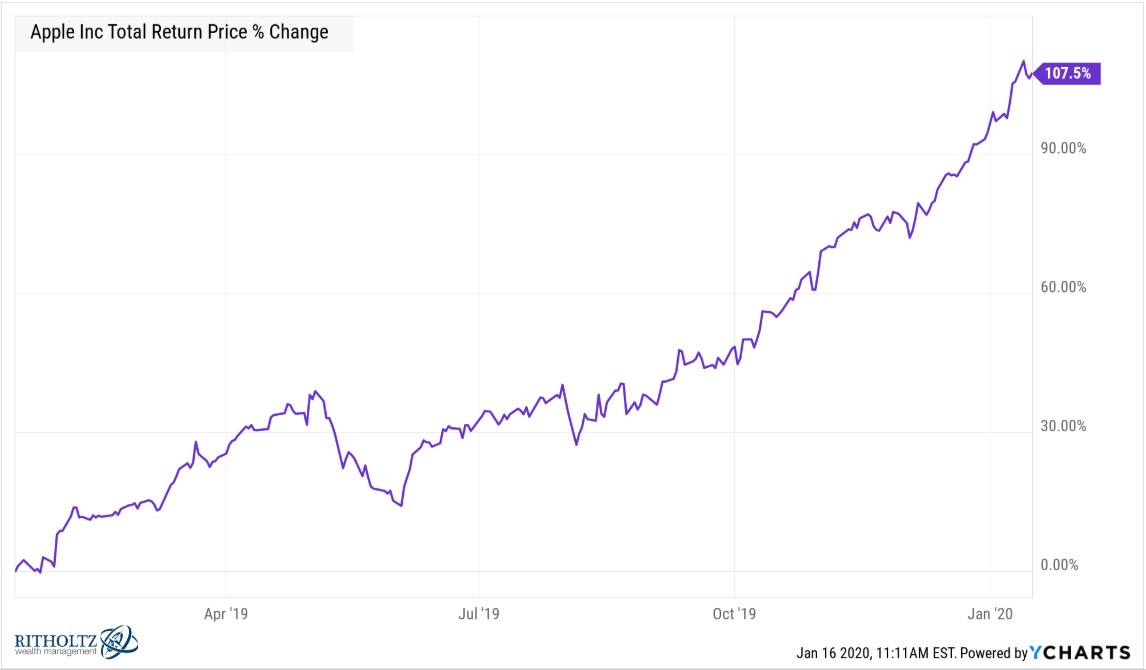 Some investors claim the only reason Apple share have risen so much must be due to a combination of inflows into passive investment products and share buybacks from the company. Index funds and buybacks have made for a nice scapegoat the past few years but these theories don’t hold water when you look at the actual numbers.

CNBC recently ran a story about this topic where tech analyst Tony Sacconaghi refutes these theories:

However, Sacconaghi points out that flows into passive vehicles were not as strong in 2019 as in previous years, yet Apple still rallied. Equity ETFs saw just over $97 billion in inflows last year while equity funds still had net outflows. He added that about $3 billion in passive money shifted into Apple last year, “which is relatively small in the context of the company’s $1.3T+ valuation.”

“Our analysis doesn’t point to compelling evidence that AAPL’s strength over the last year has been attributable to either buybacks or other technical factors such as the migration to passive,” Sacconaghi said. “Instead, investors’ view that fundamentals are improving – warranting a better multiple – appears to be the key driver of appreciation.”

Michael and I discussed this story and shared our own theories as to how one of the biggest stocks in the world could experience such a surge:

My theory as to why Apple has skyrocketed over the past year was mostly a joke.

But maybe I was only half kidding.

Look at the price-to-earnings ratio over the past year for the stock: 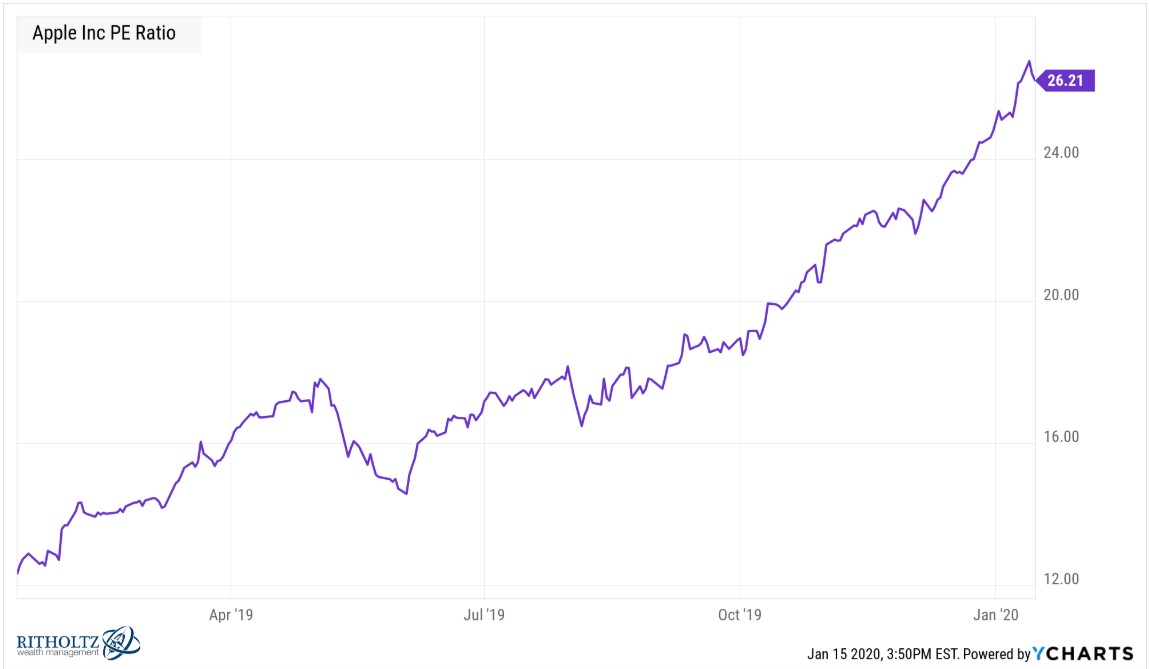 Like the stock itself, the valuation is up well over 100%. And it’s not just PE ratio. Price-to-sales, price-to-free cash flow, and price-to-book have also doubled or more over the past year: 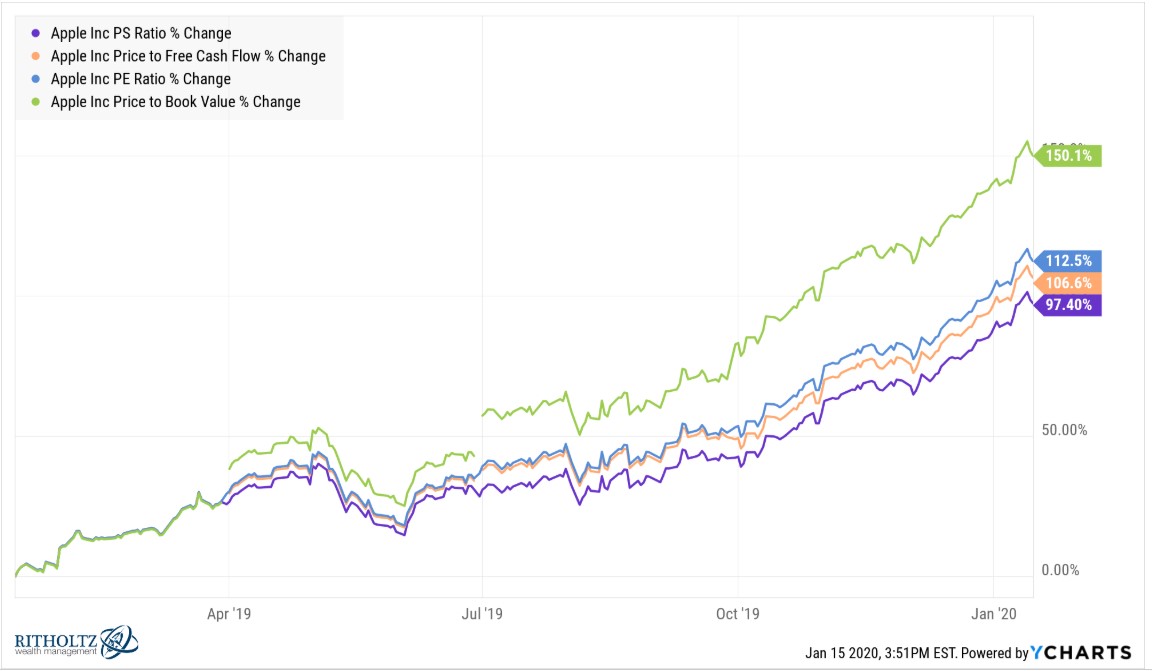 When valuations rise in concert with the stock you can’t necessarily point to improving fundamentals as the reason for a stock’s rise.

If we compare revenue and earnings numbers from September 2018 to September 2019, they are actually slightly lower through the 3rd quarter of last year: 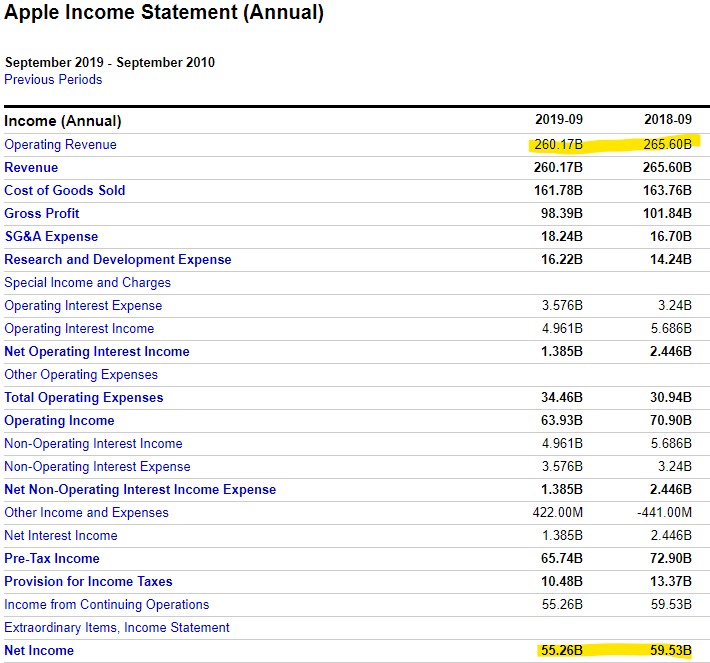 But over any 12 month period there’s no way this is how the majority of investors are thinking about stock prices.

It is almost magic when investors bid up your stock prices and valuations when there’s no true catalyst.

Over the past year investors have simply decided they are willing to pay 26x Apple’s current earnings when last year they were only willing to pay 13x. The reason I consider this magic is because it’s not something you can model out in the fundamentals.

A discounted cash flow analysis cannot gauge the emotions of investors. And that’s all changes in valuations are in the short-term. Fundamentals aren’t driving stocks over such short time frames.

Apple’s market cap has gone from roughly $720 billion to well over $1.3 trillion in just 12 months. Have the fundamentals or future prospects of the company really changed that much over the past year? To the tune of three-quarters of a trillion dollars in market cap gains?

But investors believe the company is worth that much more at the moment so that’s what it’s worth.

The other side of this, of course, is when investors lose faith or lower their expectations in a stock and hammer the valuation and price because of it.

What’s the opposite of magic? Harsh realities?

Eventually investors will see the other side of this magic but at the moment things are pretty good for stock market investors.

I don’t know what Apple should be worth but it always boggles my mind that one of the biggest, most heavily followed stocks on the planet can see such a massive re-pricing for no good reason other than investors changed their minds.

Feels pretty magical to me.

Further Reading:
Where Have All the Stock Market Returns Come From This Decade?