Someone asked me recently where the gains in the stock market have come from during this cycle. Stock buybacks? Multiple expansion? Fundamentals? Fed manipulation?

I have to say I was surprised by the results when I ran the numbers. Caveats abound here of course. I used decades as my start and endpoints in this piece I wrote for Fortune which is somewhat arbitrary. And multiples have expanded in this period it’s just earnings have too. The results here may surprise you.

But the naysayers are quick to point out this stock market rally is a house of cards, built on the back of money printing by the Fed, stock buybacks from corporations, low-interest rates, and multiple expansion. Many have pointed to the idea that the stock market has gotten ahead of the underlying fundamentals of American business.

When you look at the data, however, this decade’s performance is being almost exclusively driven by the fundamentals, much to the chagrin of perma-bears who blame everything that’s happened on the Fed.

The late-Jack Bogle came up with a simple formula to estimate future returns and describe past returns which allows us to check on the recent and historical fundamentals of what has been driving the rise in U.S. stocks.

In his book Don’t Count On It, Bogle broke out these three components by decade on the U.S. stock market going all the way back to the year 1900. Here’s an updated version through the third quarter of 2019: 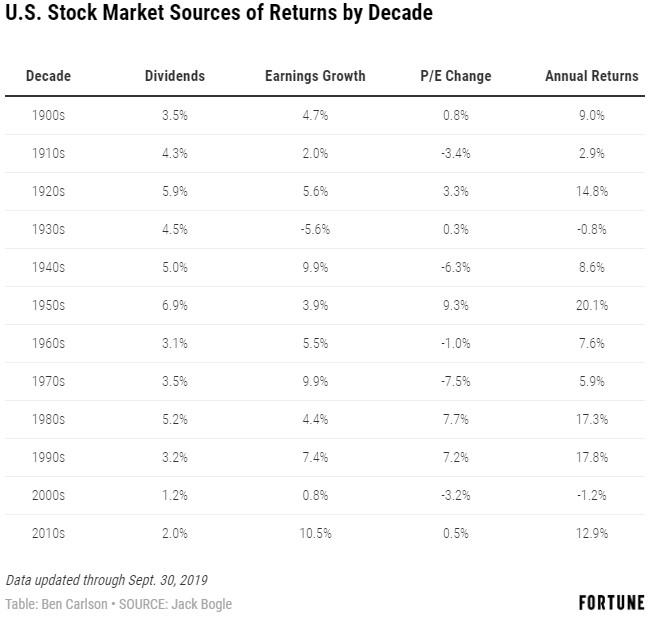 Shockingly, a vast majority of the gains over the past decade can be explained almost exclusively by improving fundamentals. Earnings growth and dividends explain nearly 97% of the annual returns for the 2010s. So the change in valuations has played a minor role in explaining the gains during this cycle.

To be fair, the earnings numbers were insanely low by the end of the last decade because of the financial crisis. Many would argue the only reason earnings growth has been so strong is because of the massive stimulus we’ve received from low-interest rates. And I’m not saying valuations haven’t risen in this time (they have). It’s just that they’ve risen in concert with corporate profits.

Of course, this says nothing about the state of future returns from here. The fact that earnings growth has been stronger this decade than any other in history is a sign we should temper expectations going forward. There’s no way that can stay elevated over the next decade.

But it’s also important to remember the market rarely matches up so well with the fundamentals as it has in the 2010s. There have been plenty of other decades which saw investors ignore the fundamentals. The 1940s saw exceptional earnings growth combined with a 5% dividend yield but investors were still scarred from the Great Depression so sentiment actually caused returns to be somewhat pedestrian.

The 1980s and 1990s both experienced a massive repricing in terms of valuations outpacing the underlying corporate fundamentals. The 2000s saw a correction in terms of both fundamentals and sentiment because of the strong performance in those prior decades.

Dividend yields are lower now than they were in the past while earnings growth cannot stay elevated forever. So expected returns should be lower over the next decade. But the change in P/E ratio is really a gauge of investor sentiment and no one can predict what that will be today, tomorrow, or 10 years from now. The 2010s have been driven more by fundamentals than every other decade over the past 100 years. That is unlikely to repeat itself over the next decade.