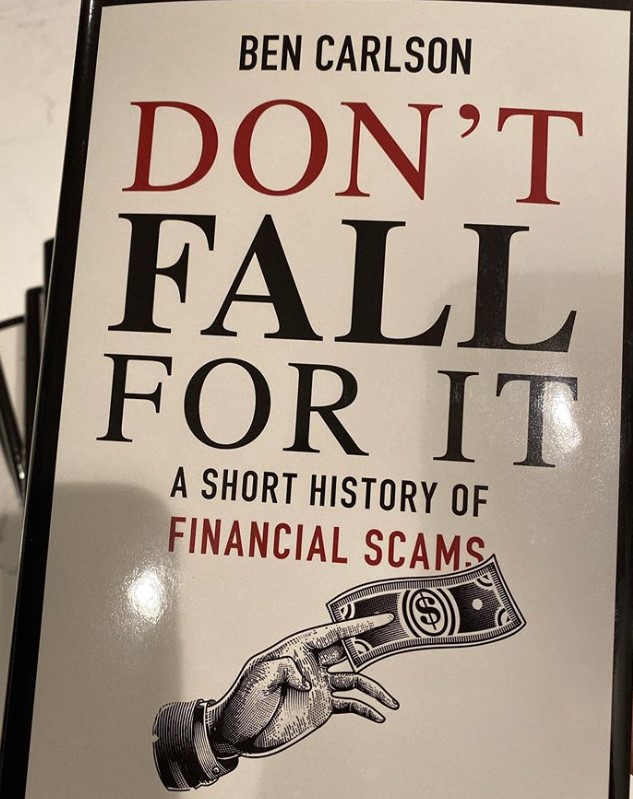 My new book Don’t Fall For It: A Short History of Financial Scams is now out in both hardcover and digital format.

This was a fun project for me because it was something completely different than the first two books I wrote.

I’m a glutton for punishment so towards the end of 2017 I started getting the itch to write another book. I started a few Google docs with some ideas I’ve had bouncing around my head for a while and decided to do some research to see if anything spoke to me.

Initially I wanted to write a personal finance book. It’s a topic that is supremely important and something that can help normal people improve their standing in life (or at the very least reduce the stress involved with making money decisions).

But this is an area with tens of thousands of books already and Ramit Sethi wrote a book on the topic last year that’s better than anything I could come up with.1

I did, however, have another idea I’ve been thinking about for a long time now. How charlatans have always been able to swindle, coerce, scam, and take people for everything they have has always been a topic that’s piqued my interest.

The real estate bubble pulled back the curtain on a number of charlatans who committed fraud and took people for all they were worth. Other scam artists have been able to trick people on multiple occasions. Why people fall for this stuff fascinates me.

I quickly realized there was far more to the story than the motivations of hustlers who scam people out of their money. What I found was a subject that was overflowing with topics I’m interested in:

There are plenty of books out there about the keys to being successful but in recent years I’ve been drawn to books about failure and the mistakes of others. There’s a ton of survivorship bias in most success stories, making them nearly impossible to emulate in most instances. But we can all learn from mistakes others have made in the past to work on avoiding them in the future.

My first two books were more philosophical in nature in that I was writing about my common sense ideas about investing for individuals and institutions. I already had plenty of ammunition in terms of content, research and structure.

This one was completely different and that’s why I enjoyed the process so much. There was a heavy research element involved in those first books but this one was a different animal altogether. I started with an idea and created the structure from the ground up.

The wonderful thing about the firehose of information available at our fingertips today is once you start pulling the thread on a topic you can go down an endless rabbit hole of sources and details.

I went through dozens and dozens of books while researching this project and one of the best parts about non-fiction books can often be the list of sources. I would often find myself buying 4-5 books at a time straight from the bibliographies of the initial books I read.

A handful of these books were from the 1970s or 1980s but some went back as far as the 18th and 19th centuries, which were easy to obtain cheaply in used copies from Amazon. Old newspaper archives also offer a treasure trove of stories told by the people who were there, at the time. History books are great and all but it’s hard to get a sense of what it was truly like unless you’re hearing about it from someone who was there while it was happening.

My publishers wanted this book to be at least 225 pages. There’s an idea that people are more attracted to thicker books when perusing in the store. But most people buy books on Amazon or read in digital form these days so that doesn’t matter as much anymore.

So it’s only 170 pages. I pulled what I felt were the best stories, characters, anecdotes, and data points from each of the frauds I chose. Long books are fine but I wanted to create something people will actually read.

Each chapter is a standalone story so you can jump around if one topic doesn’t catch your fancy.

This is a quick rundown of some of the stories and ideas covered:

There’s much more but that’s a good taste of what to expect. Here’s one of the index pages from the back of the book: 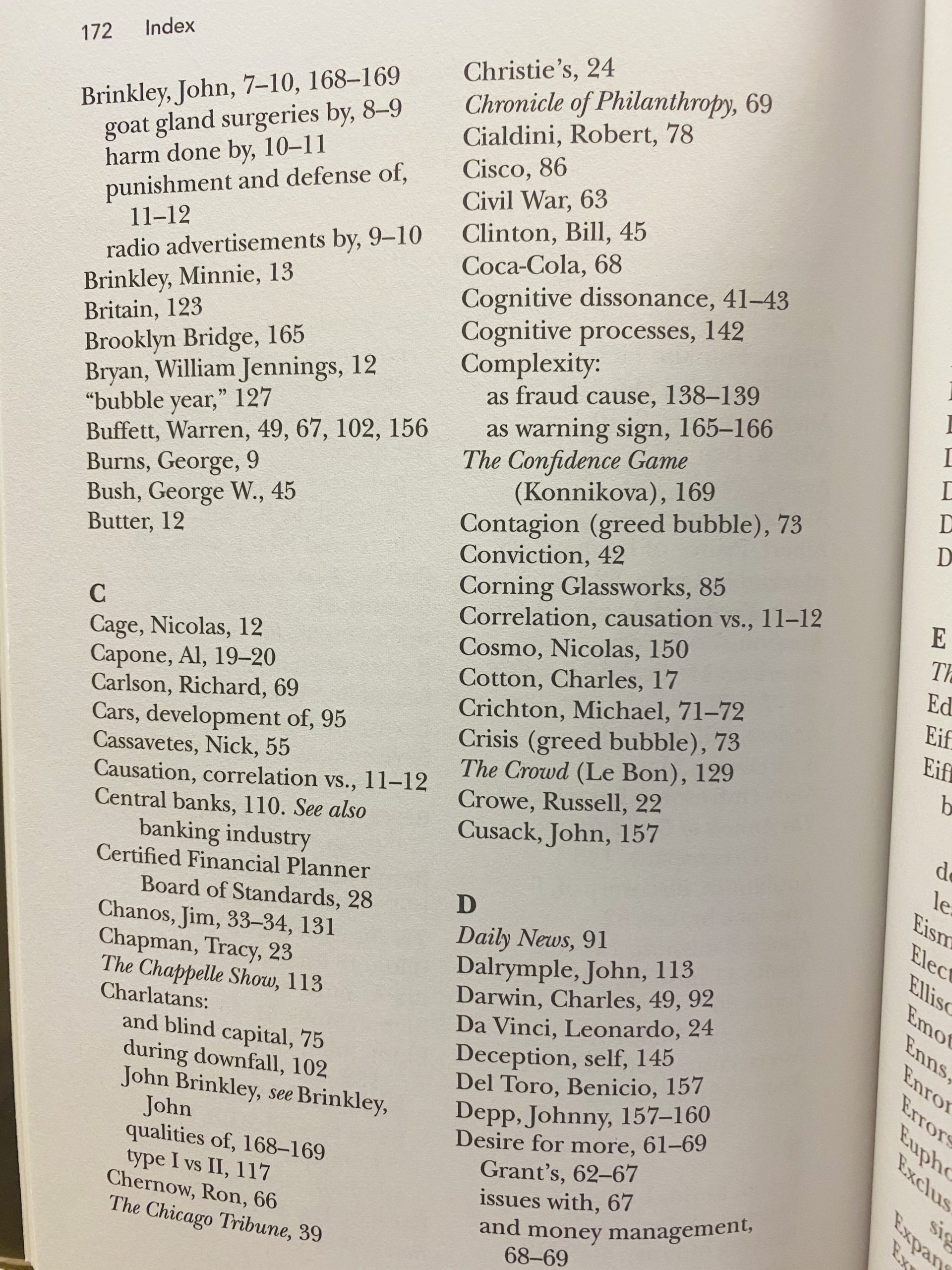 The crazy part about this book is how much I left out. Financial fraud is as old as the hills and doesn’t discriminate against different types of people (although there are certain people who are targeted more), different times in history (although there are certain times that see fraud run more rampant), or levels of wealth (scam artists don’t care where it comes from).

It feels like I could write 5 more editions of this book with different stories that weren’t covered.

I’m proud of this book because it’s equal parts things I’ve spent a lot of time writing about:

And things that were new to me:

I’ll have more to say on the book later this week but for now, do me a favor and check it out (and feel free to leave a review on Amazon):

Don’t Fall For It: A Short History of Financial Scams

1It’s possible I could someday self-publish a book using mainly all of the hundreds of personal finance posts I’ve written here but that could be a while.