Here’s an idea for the 2020s — let’s all agree to stop sending Christmas cards and just post your cute holiday picture/family update on Instagram. That way more people will see it and you don’t deal with all those cards/envelopes piling up. Who’s with me? Anyone?

Okay, that’s never going to happen but what if we also thought about giving financially sound gifts around the holidays along with the usual Peloton bikes or a Lexus with a huge bow on it in your driveway?

Probably not but a man can dream…

With the holiday shopping season about to swing into full gear, it’s time to consider what gifts you will give to friends, co-workers, loved ones—and even yourself.

No one wants to think about their finances when faced with the irresistible prospect of Baby Yoda merchandise from The Mandalorian, but I’m here to offer some potential gifts that add to financial well-being.

Since 1980, college tuition has risen 5 times faster than the overall U.S. rate of inflation. This massive cost increase, combined with the fact that more people are now going to college, has led to nearly $1.5 trillion in student loan debt. More education combined with more debt out of school has also made it more difficult for young people to buy homes so by the time millennials settle down to have kids their finances can often be a mess.

Add this all up and it becomes nearly impossible for young parents these days to save for their own children’s higher education. According to the United States Government Accountability Office (GAO), less than 3% of families have money saved in either a 529 or Coverdell education savings account.

I know grandparents love to spoil their grandchildren but the little ones will thank you down the line if you mix in some 529 contributions with the usual toys at Christmas time. Relatives can gift up to $15,000 a year without incurring gift taxes.

A book about personal finance

The holidays are a joyous time for giving and gratitude but they can also wreak havoc on your finances if you didn’t plan ahead. Personal finance isn’t mandatory in our school systems so most people are on their own when it comes to understanding their household budget, spending patterns, and saving strategies.

Ramit Sethi’s book I Will Teach You to Be Rich is the perfect how-to for personal finance novices and those who need to take their finances to the next level. Sethi covers the psychology behind our financial decisions and why it’s so easy to screw things up when we don’t have the correct systems in place to guide our actions. Most personal finance books work better as sleep aids than helpful guides but Sethi keeps things funny, interesting and provides actionable advice people can actually implement to see results.

Some interest on your savings

The holiday season revolves around the spirit of giving but you need to save money to give back to others and far too many people aren’t earning enough on their savings.

Following a series of interest rate hikes that began in 2015, the Federal Reserve reversed course and has cut their short-term benchmark, the Fed Funds Rate, three times in 2019. That rate now sits in a range of 1.50% to 1.75%. That’s not enough to move to the beach and live off the interest for the rest of your life but it’s better than things were a few years ago when rates were effectively zero.

Unfortunately, the banks haven’t followed suit by raising rates on their savings accounts. The average interest rate being paid out on bank savings accounts at the moment is just 0.09%. 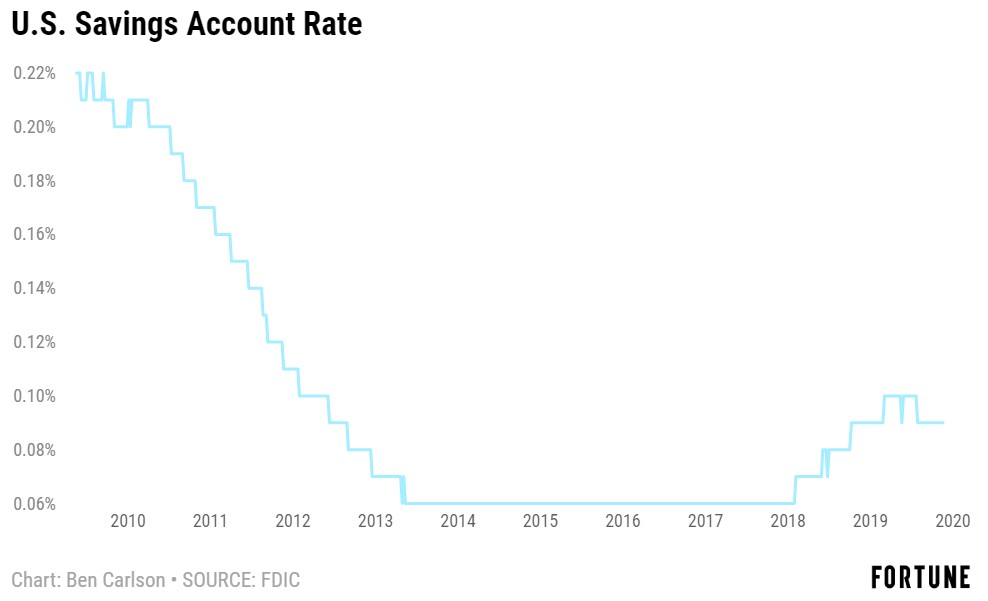 So while the Fed Funds Rate is off the mat, your savings account rate at the brick and mortar banks is not. And there is more than $8 trillion in these accounts: 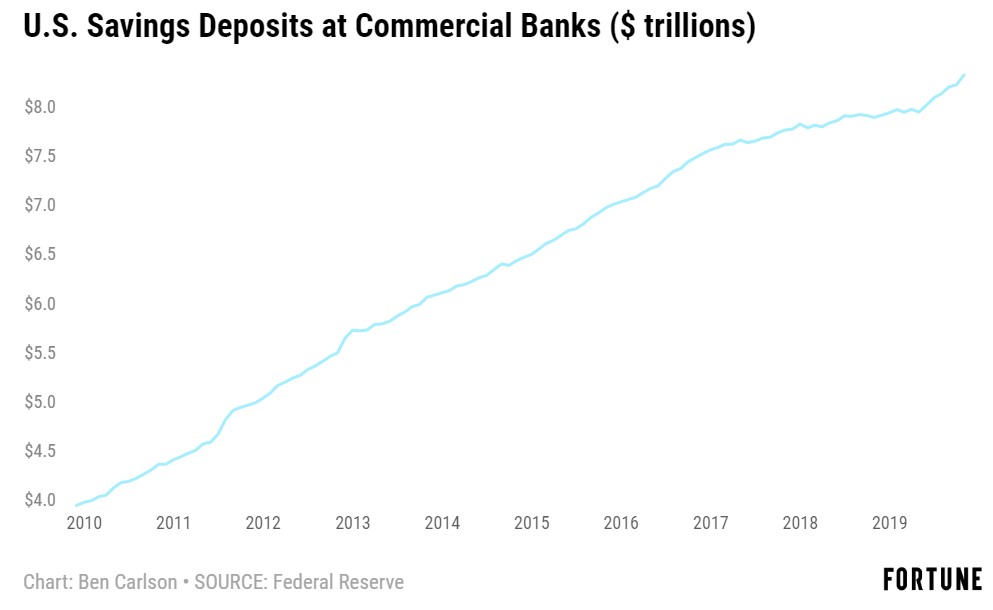 The reason these banks have kept rates so low is because they earn a spread on your money by paying you a lower amount than they loan it out to someone else. But there are better rates available. Online savings accounts don’t have to pay for the same overhead since they don’t have physical locations so they have the ability to offer higher rates.

Ally Bank currently offers 1.7% on its online savings account. Marcus by Goldman Sachs is also at 1.7% while Capital One 360 comes in at 1.8%. Again, these are not life-altering yields but they are better than the minuscule yields currently being offered at the large banks. Just be aware that these yields will rise and fall with the Fed Funds Rate so expect them to fall further if the Fed decides to cut rates yet again.

Think of interest on your savings as a gift to yourself this holiday season.

Happiness researchers Elizabeth Dunn and Michael Norton have found spending money on material possessions isn’t going to make you happier in the long run. While we may get a quick shot of dopamine from buying new stuff, we tend to adapt to our surroundings so the satisfaction eventually wears off. The same region of the brain that responds in anticipation of receiving something loses interest once we’ve gotten it so all we’re left with is a bunch of stuff we quickly grow tired of.

Research shows spending money on experiences provides the opposite effect. Our satisfaction with experiential purchases increases over time because experiences leave you with fond memories, offer a social connection, give you memorable stories you can tell for years to come and help avoid comparisons with others in a material sense.

So consider giving the gift of experience through a weekend getaway, a sporting event, movie tickets, dinners, or even a gym membership.

As a wise man named Cousin Eddie once said, “It’s the gift that keeps on giving the whole year.”