What would you have advised me to do in 2009? I wanted to put $XX [Ben’s note: a lot of money] in the total stock market and ride the index. I had around $XX [Ben’s note: about one-third as much as the amount in cash] in VTSMX at that time. I had been waiting for a blood in the streets event and was licking my lips. I read every book on 1929 and I figured it went down 89% and that if I enter at 50% of the 2007 high I might be ok. I picked 6300 as a starting point. I remembered reading about the dead cat bounce in 1929 before a further fall to 89%. As you know it never fell back and I never got invested.

This is tough to answer because we now have the benefit of hindsight. But this reader is not alone sitting in cash waiting to deploy in the stock market at lower levels following the crisis.

It’s also tough because no two crashes are ever the same.

When we look back at market crashes in terms of magnitude it feels like they go straight down and then go straight up again after bottoming.

This is not how market crashes work. They play head games with you, going from “all clear” to “stay away” on multiple occasions on the way down. Crashes are a process, not an event.

This reader studied the Great Depression but here’s the path stocks took during that monumental crash:

To call this crash brutal would be an understatement but it was also a basketcase.

After getting more than chopped in half, the stock market still had another 63% to go until it bottomed out with a gain of nearly 92% in July and August of 1932.

It’s not out of the realm of possibility that the 2008 crisis could have have turned into another depression scenario. Even though things didn’t get nearly as severe, there were still many stops and starts along the way from the top in October 2007 through the bottom in March 2009.

You can see all the stops and starts along the way: 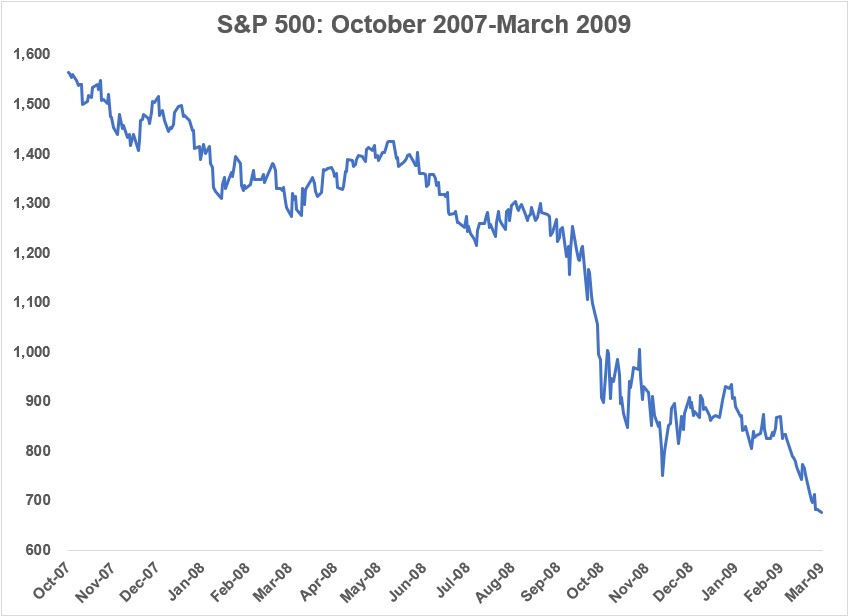 I remember a number of prognosticators and investors laying out potential buying opportunities at S&P 600, 500, 400 and even 300. Unfortunately for long-term investors, those entry points never came.

One of the best ways to predict future behavior of investors is to track their past behavior. I can’t give the exact advice I would’ve given this investor in 2008 or 2009 because I know how things played out after the fact.

But here is what I would tell anyone who is sitting on a pile of cash while staring at a market crash directly in the face:

Don’t try to call the bottom. The Great Financial Crisis piqued my interest in the Great Depression as well but it’s impossible to use any historical crash event to predict when the current one will end.

And using the worst crash in history to pick a bottom means you’ll probably be sitting out 999,999 times out of a million.

Whenever you’re putting money to work in the markets, go into it with the attitude that your timing will never be perfect.

Have enough liquid reserves available but avoid an addiction to cash. The best part about holding huge cash reserves going into a crash is boasting to your friends (and enemies?) about how smart you are for side-stepping the crash.

The worst part is cash can quickly go from a security blanket to an addiction when stocks are falling. “Just a little longer…” you tell yourself every time stocks are in a drawdown. “I’ll buy when the dust settles” feels like a comfortable place to be until you realize by the time the dust settles it’s probably too late.

I’ve received more emails than I can count like this one from investors who’ve been stuck in cash since 2009. And I completely understand how it could happen because you become paralyzed.

Diversify across investments and time. Diversification is the simple way to avoid the all-in/all-out mindset. Another way to manage regret and your psyche when figuring out when to buy during a crash is by spreading out your purchases.

All the data tells us investing a lump sum is the best long-term option the majority of the time but every investor assumes Murphy’s Law applies exclusively to them.

Averaging in over time at pre-determined intervals is one of the best psychological hacks in the investor’s arsenal, even if it’s not ideal on the spreadsheets.

Have a plan B. Whether you decide to average in or try to luck at buying in at lower levels, you need a plan B because odds are the markets won’t line up perfectly with the timing of your decisions.

Obviously, we’re in the opposite situation now. Markets have gone up for 10 years now with a handful of brief corrections along the way.

The thing is all of this advice applies to investors regardless of the situation. This is evergreen stuff that applies during bull markets, bear markets, or sideways markets because no one knows which type of environment we’re going to be in or how long it’s going to last.

What’s your time horizon and risk profile? When do you need this money? Why are you saving and investing in the first place?

No matter what the market does, becoming paralyzed in your investment decisions ensures you’ll constantly be stressed out by the investment process.

So whatever you do, if you’re sitting in cash, do something. Just create a rational plan first.

Further Reading:
The Psychology of Sitting in Cash, Part Deux