In the latest Howard Marks memo he discusses his first dealings with negative interest rates with an investment in Europe in 2014:

I had my first direct brush with negative interest rates in 2014, when I was making an investment in Spain.  The closing was due to take place on Monday, and I wired funds on the prior Wednesday so as to be in position to close.  The following conversation ensued with my Spanish lawyer:

Carlos: The money has arrived.  What should I do with it between now and Monday?

Carlos: You know that means you’ll get less out on Monday than you put in today.

Carlos: You have to put it in the bank.

That’s it in a nutshell.  Money can’t be free-floating in space.  It has to be someplace.  And you can’t keep much of it in your wallet or under the mattress.  Thus, in general, any substantial sum has to go into the bank.  And in Europe – then and now – doing so means you’ll get out less than you put in.

(1) Lower interest rates are causing some investors to go further out on the risk curve than they normally would like.

So on the one end of the barbell we have the desire to grow capital and on the other end we have the desire to protect capital. This leads to a situation where the stock market is at an all-time high, private markets have more money than they know what to do with, and interest rates are close to their lowest point in history across the developed world.

Yes, there’s tons of money sloshing around in venture capital and private  equity these days from wealthy individuals and institutional investors. This worries many people because they see it as a sign things have gotten out of hand in terms of risk-taking.

But what if we’re looking at this all wrong. What if monetary policy in the form of lower rates isn’t the cause of this? What if inequality is the driver of lower rates and not the other way around?

Here’s the data from the Federal Reserve on how the gap between the wealthy and everyone else has widened over time: 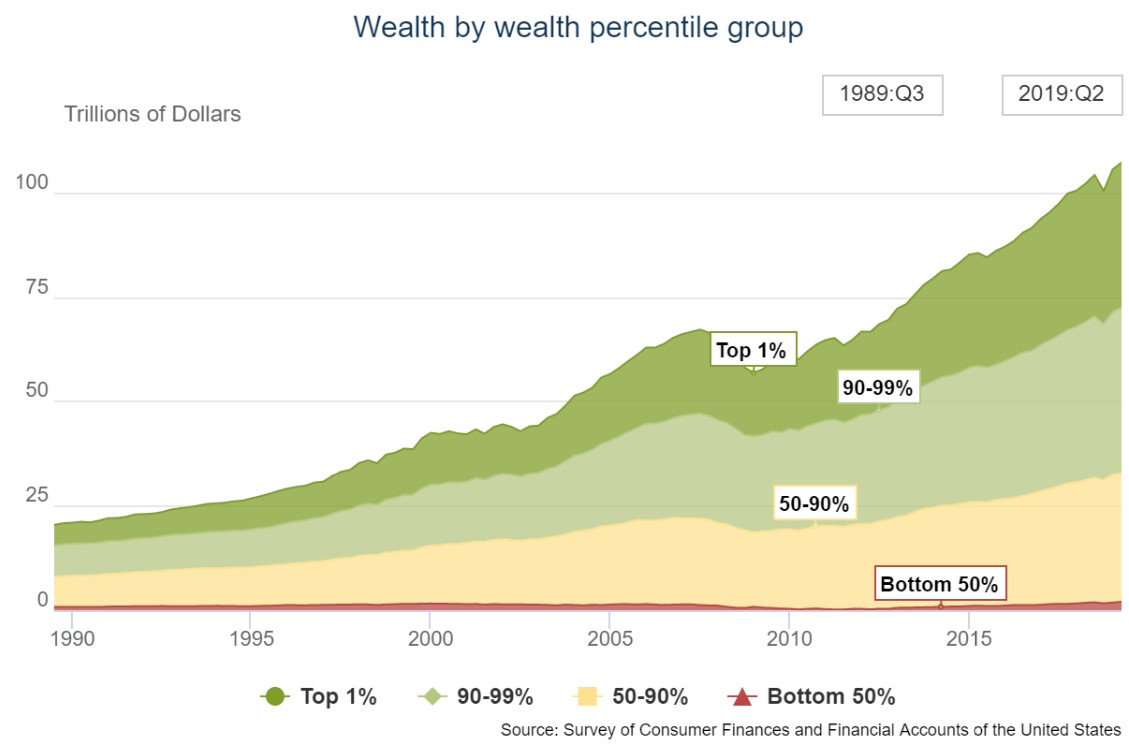 As the share of wealth going to the top 10% and top 1% continues to grow because they hold the majority of the financial assets, they need to do something with that money. There are only so many Elon Musks out there willing to risk it all to fund their passion projects.

Many wealthy people do take risk in the form of stocks, bonds, real estate, and private market investments. But they also want to protect their wealth. That means we get something of a barbell scenario of risk-taking on one end of the spectrum and search for safety on the other.

Like Marks said, money can’t be free-floating in space. It has to go somewhere.

A group of economists from the Federal Reserve studied this idea and came to the conclusion that a combination of a savings glut and lower economic growth have caused rates to fall around the globe:

This secular decline in global real rates is driven primarily by an increase in the premium that international investors are willing to pay to hold safe and liquid assets, as well as by lower economic growth around the world. The latter trend has been putting downward pressure on real rates since around 1980, possibly linked to demographic shifts, while the former emerged in the late 1990s. This timing points to the scarcity of safe assets in the context of a global saving glut as a fundamental secular force behind the low-interest-rate environment.

A savings glut is economist-speak for a situation where saving outpaces investment in things like businesses, thus bringing down the “natural” interest rate (if there is such a thing).

I don’t know exactly how this one plays itself out but if you’re confused by the markets at the moment, you’re not alone.

We talked about this idea on the podcast this week as well in the context of Ray Dalio’s latest:

Subscribe to the Animal Spirits playlist to watch more of these highlights every week.

Further Reading:
What If Interest Rates Don’t Rise Again For a Long Time