It does seem kind of crazy that some people will spend four hours reading Yelp reviews looking for the perfect restaurant where they’ll spend $60 but put $20,000 to work in a stock based on a 30-second pitch from someone on financial television.

The Ascent did a deep dive on the America Time Use Survey from the Bureau of Labor Statistics to figure out how much time people spend on their personal finances versus a bunch of other typical activities: 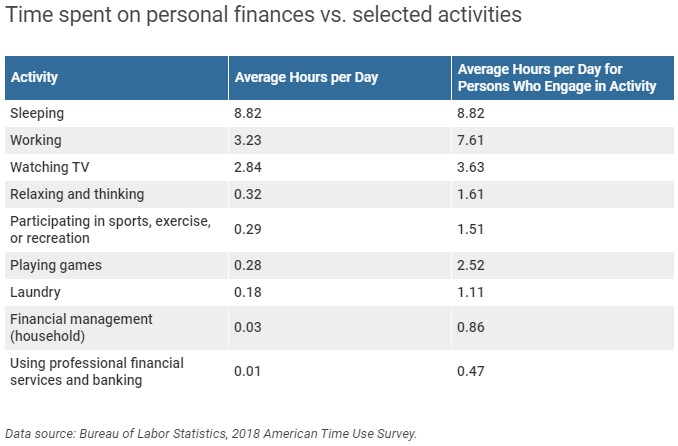 If you do the math here the average American spends more than 85 hours a month watching TV (thank you all 1,200 streaming services for that). That’s almost 100 times as much time allocated to Succession, Game of Thrones, Fleabag, and NFL games as people spend on their household finances.

According to this survey, Americans spend less than 2 minutes a day managing their finances.

I’m not going to TV-shame anyone on this website. I love watching TV. We’ve been in the golden age of television for at least the past decade or so and it’s glorious.

The trouble here is spending a minimal amount of time managing your finances can be seen as both a success or failure depending on the systems or lack thereof, you have in place.

There are two different camps when it comes to being unsuccessful in managing your finances:

(1) Some people ignore their finances completely. This group has no handle on how much they spend, what they generally spend their money on, how much they save (if anything) or how their financial ecosystem generally works. They either hope to figure things out later or simply throw their hands in the air in disgust over their situation.

It’s all too complicated so I’ll just figure it out later. I’m not in a position to save right now anyway.

(2) Some people obsess over every minor money detail. This group loves to debate the minutiae on every money matter that’s completely outside of their control. They worry about how the government is out to screw them over or which geopolitical events are going to bring down the financial system. They focus on small things like clipping coupons or finding the gas station that will save them 2 cents/gallon but don’t have the big picture items that really matter locked down.

Save money!? In this economy!? Are you kidding me!?

The former group is so overwhelmed they never get started while the latter group is so bogged down in the details they miss the forest for the trees. But both get you to the same place financially — nowhere.

I can certainly sympathize with both groups. No one teaches us this stuff unless you’re lucky enough to come from a family with good money habits. And even then you’re not guaranteed a successful household financial situation because money is such a taboo subject for most families.

That stat about how people spend almost 100x as much time watching TV than managing their household finances can be a bit misleading. That number should actually be your goal, assuming you’ve done the heavy lifting upfront to put in place a financial system that gets done what needs to get done.

The good thing is you don’t have to become a financial expert to get your household finances in order.

The list of things that matter financially for your household is fairly short:

That’s pretty much it. Get those big things right, understand how they will impact your finances, and you will be better off than 80% of the population. But none of those things matter if you don’t have a system in place to guide your actions.

The goal shouldn’t be to allocate more time to managing your finances. The goal should be to spend 100x the amount of time doing the things you actually enjoy doing. But to get to a place where finances don’t take up too much of your time and have your financial house in order, you have to set things up in advance so you’re not constantly worrying about it.

Ignoring your finances and praying for a financial windfall is obviously not an option but neither is micromanaging your personal finances every single day. Eventually, you’ll either lose your mind or mess things up by overthinking things. Activity for the sake of activity does you no good if you only get in your own way.

The same is true of investing. Spending more time on your portfolio doesn’t guarantee success. In fact, too much thought and activity around your portfolio can be detrimental to your investment performance.

You should strive to spend only 2 minutes a day thinking about your household finances, assuming you’ve done the following in advance:

You just have to make some conscious decisions ahead of time to ensure you’re saving, spending on areas that matter to you, and avoiding the pitfalls of lifestyle creep.

This is all easier said than done but if you don’t have an overarching system in place to guide your actions and relieve yourself of the inherent stress involved in household money decisions, it’s basically impossible to ever get ahead.

What Do I Want My Money to do For Me?