Share buybacks are turning into one of the more contentious issues in all of finance. I don’t think it matters nearly as much as some would have you believe but there are people in both finance and political realms who think buybacks are everything that is wrong with capitalism right now.

Bernie Sanders is the latest politician to voice his hatred for stock buybacks. I just think the law of unintended consequences is at play here and an outright ban of something like this would have outcomes some of these people aren’t thinking through.

Here’s my response in a recent Fortune piece.

He also included a plan to ban stock buybacks:

Ban Stock Buybacks. Under this plan, large-scale stock buybacks will be treated like stock manipulation, just as they were before 1982. This will be done by repealing the Securities and Exchange Commission’s misguided Rule 10b-18. Since Trump signed his tax plan into law, corporations have announced over $1 trillion in stock repurchases which provide absolutely no benefit to the job-creating productive economy. These buybacks are nothing more than stock price manipulation and must be treated as such.

I get the sentiment here. Wages for the lower and middle classes have been growing at a far slower pace than those at the top of the income scale for decades. Wealth inequality continues to increase the gap between the haves and the have nots, mainly because the wealthy tend to hold most of the financial assets. It’s estimated the top 10% of households now own nearly 85% of the stocks in the United States.

This is unsustainable in the long-run but stock buybacks are not going to make a dent in the inequality issues in this country. I’ve never heard a politician in this country complain about shareholder dividend payments but that’s effectively what a stock buyback is in many ways. Buybacks are dividends in disguise. It’s just a different form of returning cash to shareholders.

When corporations pay out dividends, investors receive their share of corporate profits in the form of a cash payment. Share buybacks, on the other hand, eliminate the number of shares available on the open market, leaving a higher share of profits for the remaining investors who don’t sell their shares. Buybacks simply increase the profit per share available to equity investors.

Investors can do what they please with dividend cash payments, including reinvesting in company shares but investors can always create their own dividends if they are so inclined. All you have to do is sell some shares. And with commissions dropping to zero at most brokerage firms, creating your own dividend stream is more cost-effective than ever.

One of the reasons buybacks have received so much scrutiny from politicians of late is because they represent a larger piece of corporate America’s capital allocation decisions than they did in the past. According to data from YCharts, share buybacks in 2018 totaled nearly $800 billion for all S&P 500 companies while the total dividends paid out to investors was around $490 billion. Buybacks have outpaced dividend payments for the last decade-and-a-half: 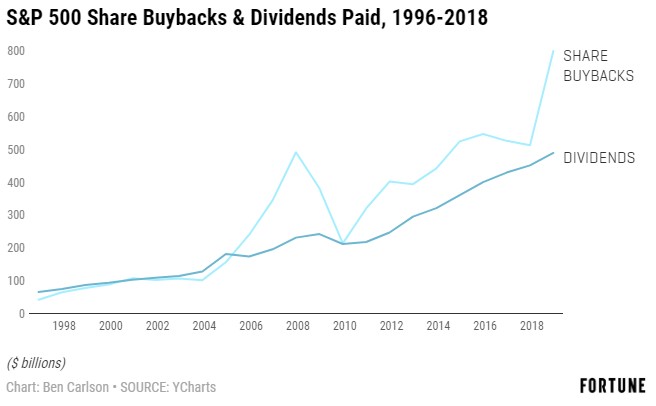 Buybacks have been roughly three times as volatile as dividend payments in this time which makes sense from an investor perspective. Companies who pay out consistent dividends don’t like to cut those payments because investors take that as a signal things are heading in the wrong direction. It’s the bird-in-the-hand theory. Investors are more forgiving of management who changes their buyback quota from year-to-year.

Interest rates are much lower now than in the past so it makes sense we’re seeing a number of companies borrow money to repurchase shares in what is essentially an equity-for-debt swap. So it’s not even the case in many instances where management is deciding to use free cash flow to buy back shares, instead opting to use cheaper financing rates to change their capital structure.

It’s also important to remember corporate executives have a number of other avenues to explore when making cash flow decisions. Buybacks have grown in the capital allocation hierarchy over the past four decades or so but far more money is spent by corporations every year buying other companies through mergers and acquisitions. Michael Mauboussin put together a chart of the various ways companies deploy their capital to show how things have changed since the early-1980s: 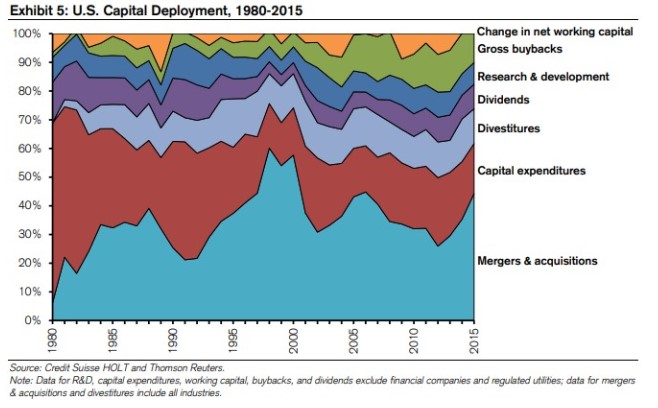 Share buybacks are a larger piece of the pie than they were in the early-1980s when the SEC changed a rule that made them more advantageous for companies to pull off, but they’re not the be-all, end-all. Mergers and acquisitions were nearly twice at large as dividends and share buybacks combined in 2015. Are politicians going to ban M&A activity as well?

Banning buybacks will not force CEOs to pay their employees more. Corporate leaders would simply find other ways to return money to shareholders if buybacks were banned (or find other ways of paying themselves more with that excess capital). Increasing the minimum wage would have a far greater impact on the lower class than banning share repurchases.

Sanders’s first point in his new plan talks about the need to “give workers an ownership stake in corporate America” to allow people to take advantage of the long-term benefits of investments in the stock market. This is an idea I can get behind. Lawmakers should encourage more people to invest in the stock market to take advantage of corporations returning money to shareholders, whether that’s in the form of buybacks, dividends or any other number of capital-allocation decisions. The stock market remains the easiest way for individuals of all shapes and sizes to earn a piece of corporate profits and take advantage of technological advances and innovation.

Instead of worrying about how corporate executives allocate their capital on behalf of shareholders, politicians would be better off giving workers better access to the stock market through tax-deferred savings accounts. Corporate America isn’t going to stop making profits. Let’s make it easier for workers to earn a share of those profits, regardless of how the companies return that money to shareholders.