It feels like people have been worried about the next recession every day since the last one was over. I get it. Recessions aren’t fun. But you can’t constantly remain in the fetal position simply because you know the economy and markets eventually have a downside.

Here’s a piece I wrote for Fortune to provide some context around recessions and how to think about them from the perspective of an investor.

If you would have told me in 2009 the following would be true today I probably would have called you a liar:

In comparison to 2009 when the world was seemingly on the precipice of falling apart, things are pretty great in terms of the markets and economy right now. But because the Great Financial Crisis of 2007-2009 was so severe, investors have been worried about the next recession since the day it ended.

First, there were double-dip recession fears. Next, it was the sovereign debt crisis in Europe. A soft landing in China has been a worry for years now. Then it was the surprise presidential election results in 2016. Now the big worry is an inverted yield curve. There will always be something to worry about because good news is gradual while bad news is a headline.

Recessions are always difficult from an economic perspective because people lose their jobs, businesses slow or shut down, and families get hurt from the financial strain. But from a markets perspective, investors probably spend way too much time worrying about the next big one.

There’s an old saying that the stock market has predicted nine out of the last five recessions. Yes, the stock market is supposed to be forward-looking, but it’s not Nostradamus. Here is a look at the performance of the S&P 500 leading up to the past 12 recessions: 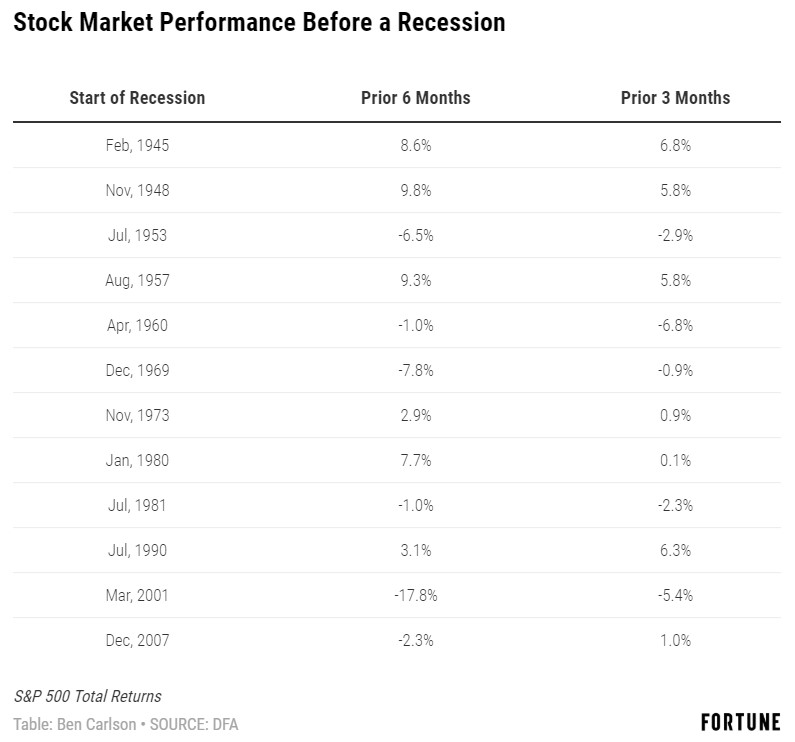 The lead up to the downturn of 2001 is really the only meaningful correction that occurred just before the start of a recession. In fact, the average 3 and 6 month performance for U.S. stocks was 1.2% and 1.0%, respectively, in this time. Stocks were positive almost 60% of the time in the 3 months prior to the onset of a recession.

Every time stocks fall a little, it feels like they’re going to fall a lot. But most of the time, stock market corrections are head fakes, not an actual crash scenario. There may be signals investors can use to tip them off to a possible recession. The stock market is probably not one of them.

Recessions are a feature, not a bug

Here’s the list of U.S. recessions since World War II: 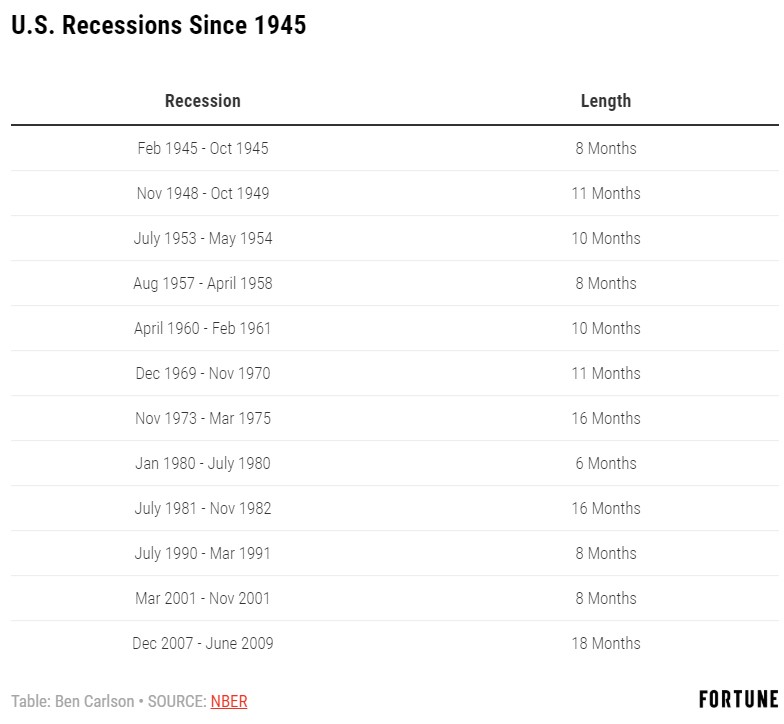 Looking at this another way, 85% of the time the economy is in a state of expansion. The problem for investors is most of us spend 85% of our time focusing on events that happen 15% of the time instead of the other way around.

It’s understandable that recessions are worrisome. Many of the worst bear markets of all-time have coincided with a nasty recession. But a recessionary posture can’t be your default or there will rarely be any gains to hedge in the first place.

It makes little sense to always think in extremes as an investor because markets are rarely at extreme levels, by definition. This means avoiding investment positions that rely on words like ‘always’ or ‘never’ because it can lead to unnecessary or avoidable mistakes.

Yes, recessions can be painful. But investing under the assumption that the next one is always right around the corner means you’ll always be positioned too defensively. But that doesn’t mean we can ignore economic downturns altogether either. If you build your portfolio under the false hope that there will never be another downturn, you’re going to overreact when the inevitable pullback does occur.

We could go into a recession tomorrow or the expansion could chug along for another few years. No one knows for sure. So the way that you plan for this inherent uncertainty is by diversifying your portfolio enough so it’s able to withstand a wide range of economic and market environments.