Millennials got bodied in the downturn, have struggled in the recovery, and are now left more vulnerable than other, older age cohorts. As they pitch toward middle age, they are failing to make it to the middle class, and are likely to be the first generation in modern economic history to end up worse off than their parents. The next downturn might make sure of it, stalling their careers and sucking away their wages right as the Millennials enter their prime earning years.

The generation’s homeownership rate is a full 8 percentage points lower than that of the Gen Xers or the Baby Boomers when they were the same age; the median age of home-buyers has risen all the way to 46, the oldest it has been since the National Association of Realtors started keeping records four decades ago.

The next recession—this year, next year, whenever it comes—will likely make that Millennial disadvantage even worse. Already, Millennials have put off saving and buying homes, as well as getting married and having babies, because of their crummy jobs and weighty student loans. A downturn that leads to higher unemployment and lower wages will force Millennials to wait even longer to start accumulating wealth, making it far harder for them to accumulate any wealth at all. (Compound interest is magic, after all.) Their trajectory, already terrible, might get even worse.

Many millennials caught a bad break. A combination of a once-in-a-generation recession, a poor job market, stagnant wages, and student loans set my generation back financially.

But I’m going to take the other side of this argument. What if maybe, just maybe, millennials won’t be the generation that gets crushed during the next recession?

Here are some thoughts:

Adulting for many young people has gotten put on the backburner (and I don’t really blame them).

Millennials are more highly educated. A big reason young people are getting married later in life is that they’re better educated than previous generations. More young people going to school for longer means more people that put off adult responsibilities: 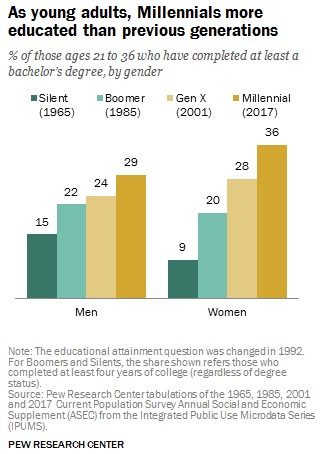 Student loans aren’t much fun but over the long-term this should be a good trade-off for this group: 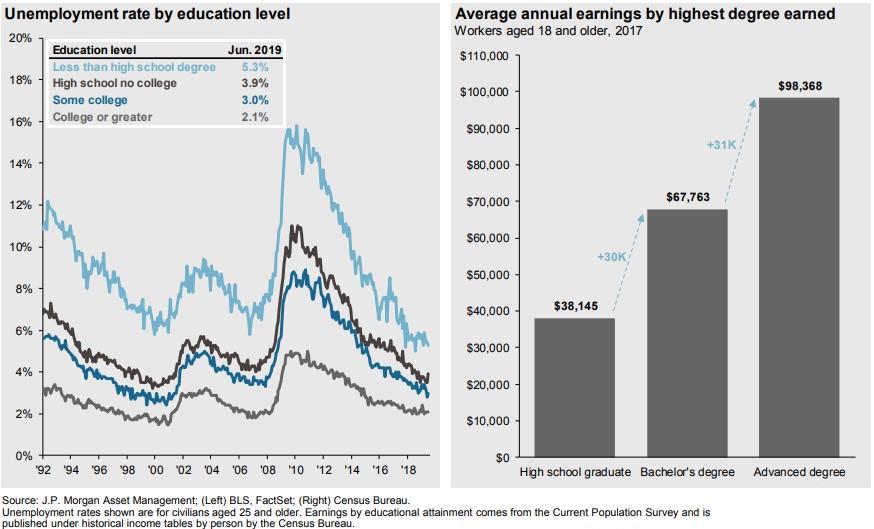 Yeah, it would have been nice for more young people to be in a position to buy a house or stocks when they went on sale in 2008. But the fact that millennials don’t have as many financial assets means they won’t feel as much pain when stocks and housing prices do drop the next time around. Maybe they’ll actually be more prepared the next time a downturn hits.

Wouldn’t the next recession be more painful for those who hold most of the financial assets? They’re the ones who will experience the biggest losses since they’ve seen the biggest gains.

And, oh by the way, many millennials should be making more money now that they have these educations under their belts. Maybe some of them can actually take advantage of lower prices this time around.

The millennial value proposition has changed. People like to think millennials are all 25 years old but we’re actually growing up. I was born in 1981 (technically making me a millennial but I’m basically in no man’s land). Millennials will be entering their 40s in the 2020s. We have more education and experience now than we did going into the last recession.

Who will be the first to go in a downsizing: the up-and-coming young person with a smaller salary or the older person with a bloated salary who has been there forever?

These decisions will be much more difficult the next time around.

The next recession won’t be like the last. The availability heuristic is the idea that our brains rely on immediate examples that are easy to recall when making arguments. So everyone assumes the next recession will be the same kick in the pants as the last one.

Things are much different now. Not every recession will push the financial world to the precipice. So using the Great Recession as your baseline for how things will play out during the next downturn is a faulty starting point.

The next recession is far more likely to be different than the last one than the same. Not everyone will be impacted in the same way.

Recessions happen to every generation. Every generation grows up. It may not feel like it now but millennials will eventually become the richest, most powerful demographic at some point.1 It won’t happen for a while but it will happen, just as it did for my parent’s generation and their parents before them.

To get to that place, millennials are going to have to live through recessions just like every other generation did.

The Greatest generation survived two world wars, the Great Depression and 7-8 other recessions by the time they reached retirement age. My grandparents may not have been saddled with student debt when they were starting out but both of my grandfathers fought in World War II. The psychological baggage that generation dwarfs anything young people these days have to worry about in terms of financial baggage.

Baby boomers have made it through 5-6 recessions since they came of age along with two separate stock market crashes of 50%. Also, while boomers didn’t have the student loan crisis to deal with, they were saddled with 15% mortgages at the start of the 1980s and double-digit inflation. Plus they grew up with like three TV channels.

Gen X has had to live through 3 recessions, 9/11, stock market crashes and the fact that everyone forgets they even exist as a demographic at times.

Recessions will never go away. I’m planning on living through plenty more over the course of my lifetime.

Millennials might do just fine the next time around, mostly because it probably can’t get any worse than the last recession we were blindsided by just as we were starting out in the working world.

If anything, I’m more hopeful the tech-savvy millennials will be more equipped to survive the next downturn than the baby boomers, many of whom are woefully underprepared when it comes to their retirement savings.

Plus, millennials will live longer, on average, than previous generations, giving them the greatest asset of all — human capital.

Further Reading:
Are Millennials Doomed in a Lower Return Environment?

1I give Gen X like 18 months to hold the title before this happens.