Maybe one of the reasons collective retirement savings statistics are so depressing is because retirement is really only a few generations old. Most people in the past never had 20, 30, or 40 years of life after work to plan for. There aren’t many real-life examples people can point to when trying to plan for this stuff.

So retirement will likely be different than most people expect. Some will have to work longer. Others will never be able to stop working. And still others are going to need their money to last many decades. Here’s a new piece I wrote at Fortune that deals with expanding life expectancies and what it means for retirement planning.

In the past, most people simply worked until they died, with little time for leisure in their later years. In the year 1870, for those who lived past age 65, the labor force participation ratio for males was close to 90%. Today it’s less than 20%. Well into the nineteenth century, about 50% of all 80-year-old men in America were still working to support themselves or their families.

One of the reasons people didn’t plan for their golden years back then is because not many people expected to live very long. In 1800, among all babies who were ever born, roughly half died during their childhood. Life expectancy was just 30 years and no country had a life expectancy above 40. Life expectancy at birth was only 45 years in 1870. The average life expectancy around the world today is 72.

In the year 1900, close to 20% of males born in the U.S. died before their first birthday. Today the mortality rate doesn’t reach that high until you get to age 62. The average American now retires at age 62 while 100 years ago, the average American died at age 51.

The gains have slowed in recent decades, but you can still see an upward trajectory in the data: 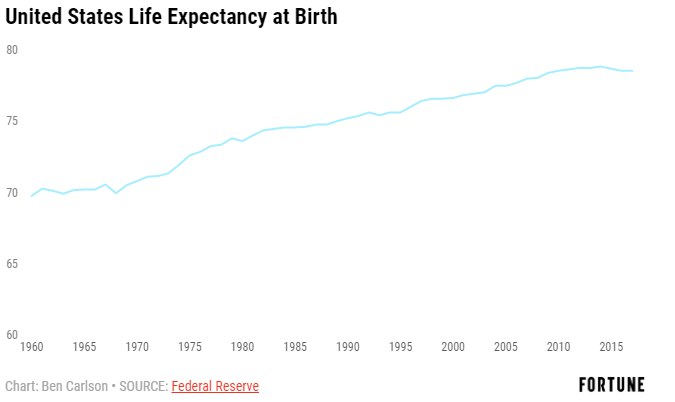 And for those who do make it to retirement age, your life expectancy could be in the two-to- three-decade range: 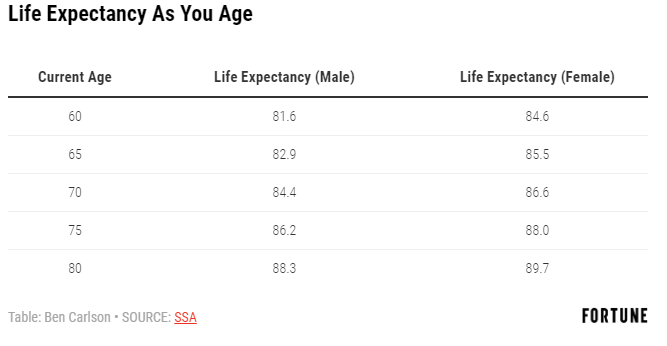 There are a number of investor and market implications from this data.

Stock market crashes and recessions can be scary to live through, especially for retirees who no longer have the human capital in terms of earnings power or the time to wait out a prolonged bear market. But your biggest risk is not market or economic volatility but running out of money before you keel over.

Portfolio management in retirement will require a balance between the need for stability in the short-term versus the need for growth in the long-term. Very few retirees have enough money to live off the interest in their portfolio, especially at current interest rate levels. Even a 2% inflation rate would nearly cut your purchasing power in half over 30 years if you simply hide your cash under a mattress.

Therefore, most investors will be forced to take some risk and accept some volatility in their portfolio to ensure they have enough money to see them through the long haul.

Many are worried the onslaught of baby boomer retirees in the coming years will destroy the stock market. There are a number of reasons I don’t think this will be the case.

For one, many boomers are woefully underprepared for retirement, which means many will be forced to take more risk with their money to make up for a shortfall. Then there’s the fact that it’s estimated the top 10% of households by wealth now hold nearly 85% of stocks in the U.S. Most of that money will simply be handed down as opposed to liquidated. And finally, millennials now outnumber their parent’s generation. As they hit peak earnings power in the coming years, the younger generation should be positioned to pick up the slack as buyers of stocks.

Using Time to Your Advantage

In his book Falling Short: The Coming Retirement Crisis, Charles Ellis lays out two simple solutions that can make your money go further to take advantage of the fact that people are living longer.

Taken together, starting to save earlier and working longer would reduce your required annual savings rate by a factor of 10 when compared to starting later and retiring earlier.

Longer lifespans make financial planning more important than ever. When you begin saving, how much you save, and when you decide to retire will all have a huge impact on how far your money goes in your retirement years.