This year has been kind to stock and bond markets around the globe: 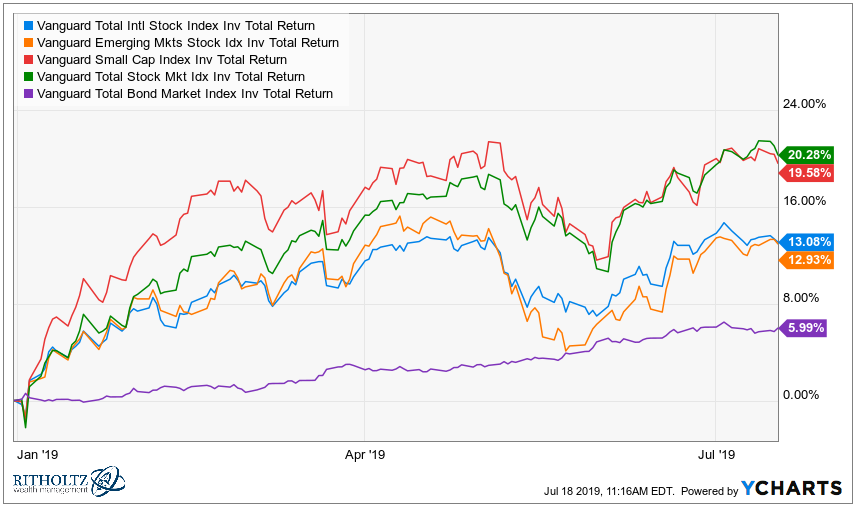 But I’m sure there are some investors who hate to see the bond performance holding their portfolio back when stocks are doing so well.

If we zoom out to the past year — which includes the brief bear market in late-2018 — you can see bonds are actually the best performers of the group: 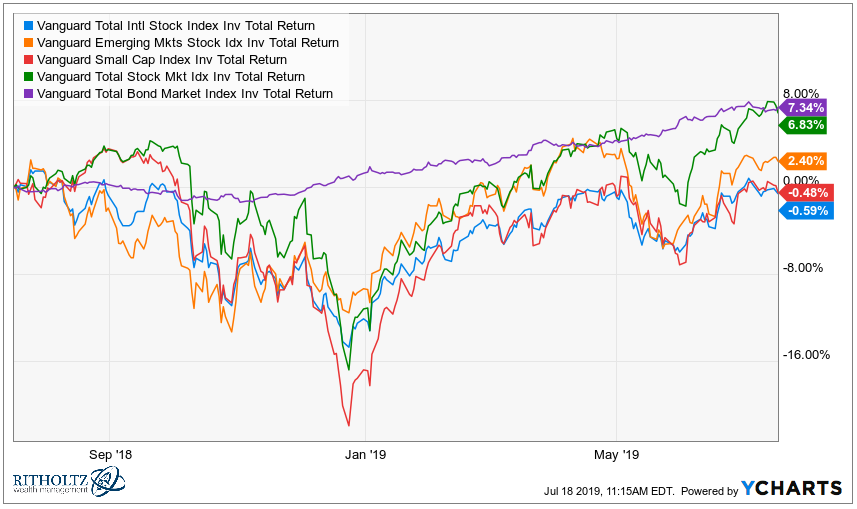 Now you would be shaking your head at the performance of small caps and international stocks for badly lagging the broad U.S. stock market and bonds.

If we go back to the aughts, you can see everything crushed the broad U.S. stock market, especially emerging markets and bonds: 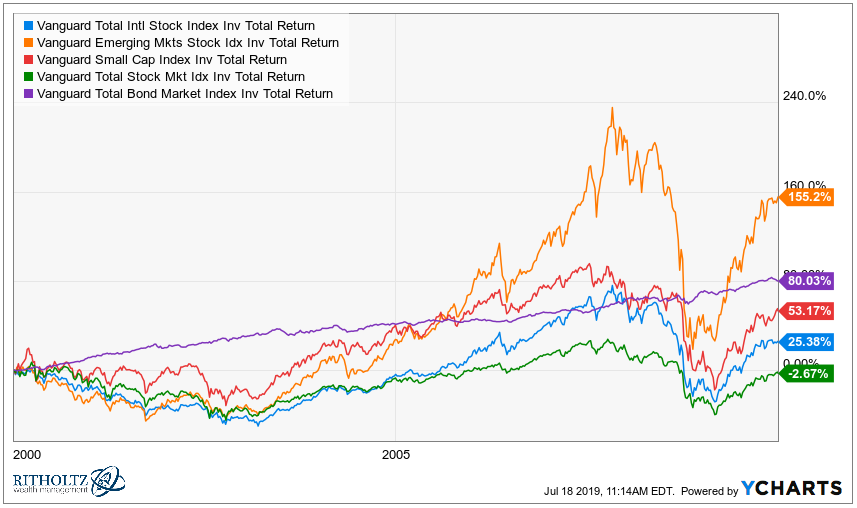 That relationship has been flipped on its head in the 2010s: 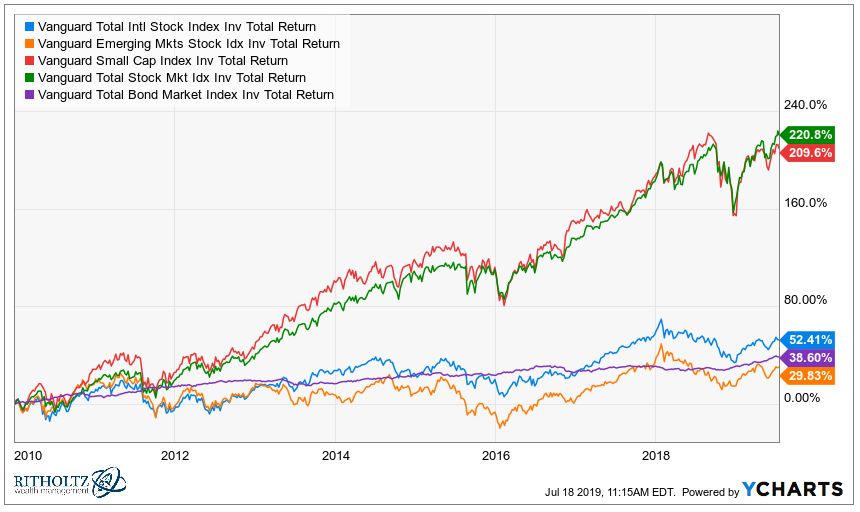 The broader market and small-cap U.S. stocks have left emerging markets, foreign stocks, and bonds in their wake and it’s not even close.

Then there’s a year like 2008 where bonds were the only traditional asset class that worked: 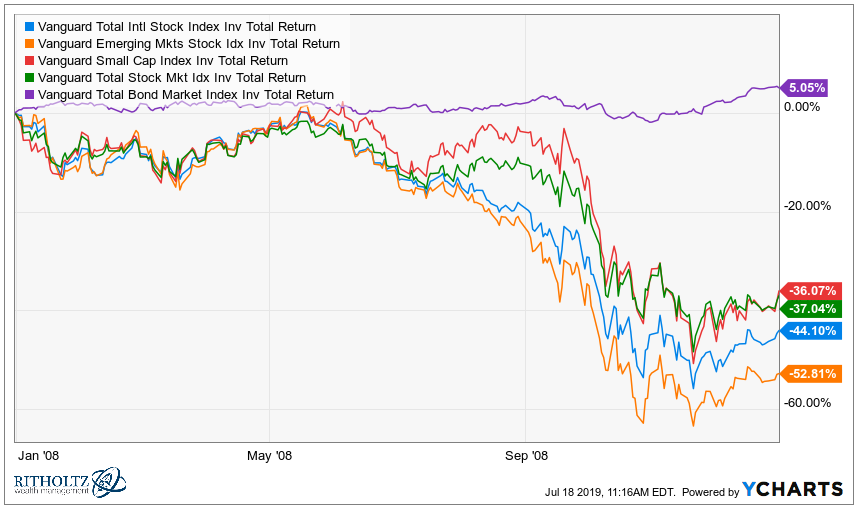 Everyone complains about correlations going to one in a crash but bonds easily refute that point.

Once the market bottomed from the crash in early-March 2009, you can see how well stocks did for the remainder of that year: 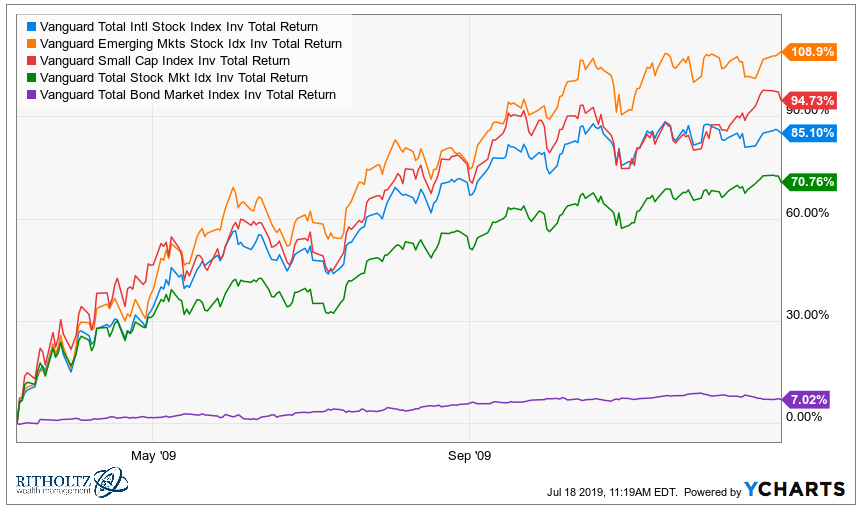 Bonds actually did pretty well on an absolute basis but on a relative basis, stocks destroyed fixed income.

I could continue but you get the point. Markets are, if nothing else, cyclical.

The hard part about running actual money in the markets is those periods of relative underperformance always feel longer than they actually are. Time slows down because you can’t help but check performance on a regular basis.

Cliff Asness once said, “If you have a three year period where something doesn’t work, it ages you a decade.  You face an immense pressure to change your models, you have bosses and clients who lose faith, and I cannot explain the amount of discipline you need.”

When we’re riding the wave, market trends feel like they’re going to last forever. Right now, that would mean U.S. stocks, and more specifically, technology stocks, are going to dominate for the foreseeable future.

And maybe they will…for a time. But nothing wins always and forever in the markets.

Successful investors know there’s no such thing as a perfect portfolio. So you must understand and be willing to live with whatever drawbacks exist within the portfolio of your choosing.

And then, come hell or high water, you must be willing to stick with that portfolio. The strategy you either can’t or won’t stick with is indistinguishable from a failed investment plan.

Further Reading:
From Great to Good