Bloomberg shared a graph recently that shows there is now $13 trillion of negative-yielding government debt in the world: 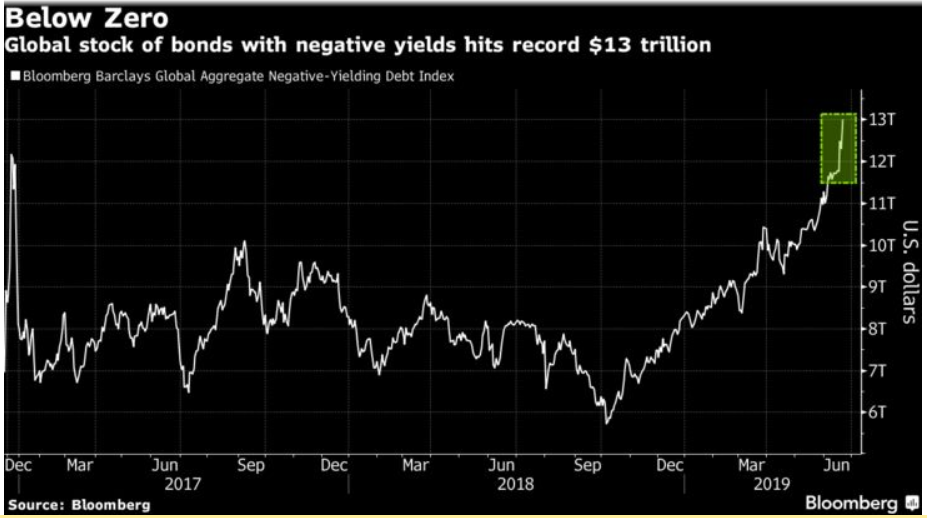 More than half of European government debt now has a negative yield.

I’m still trying to wrap my brain around this so here are some questions rattling around my head about this one:

How the hell did this happen?!

Which environment was more mispriced — the high yields back then or these new low yields?

Why aren’t these countries borrowing as much money as possible and just handing it to people on the street (or maybe something more useful like infrastructure or education, stuff like that)?

How much debt supply could the market handle at these yields?

Isn’t this a sign of an anti-risk bubble? I get the idea that this cycle is getting long in the tooth in the U.S. considering we’re in the 28th inning or so. But how much euphoria could there be in the markets when people are paying governments to hold their money for them?

Is this an aberration or the new, new normal? Demographics in Europe aren’t getting better anytime soon. There’s not a burgeoning technology sector across the pond to juice those economies. Will this be a crazy blip we look back on in 20-30 years as being insane or a new way of thinking about government debt?

Do you remember that Michael Lewis book about the European debt crisis?  After reading his tales of profligate spending and government mismanagement it felt like rates were going to 25% across developed Europe, the EU was on the precipice of breaking up and Greece was going to have to sell the Parthenon to the highest bidder to stay afloat.

How could anyone possibly know what to make of this stuff? This time truly is different. There are no playbooks for navigating a world awash with negative-yielding government debt because it’s never happened before.

Anyone that tells you they know what’s going to happen next with interest rates is delusional, overconfident in their abilities or lying to themselves or their audience.

Loads of negative-yielding government debt is just the latest crazy thing we’re forced to deal with and I have more questions than answers.

Further Reading:
Will the U.S. Continue to Dominate?