“I want you to remember this face here, okay? This is the guy, behind the guy…behind the guy.” – Trent (Swingers)

You don’t hear this one as much anymore but the old thinking around index funds from many professional investors used to be: Why would I want to own index funds and accept being average?

The funny thing about owning those “average” index funds is that they almost assure you above average results over the long-term: 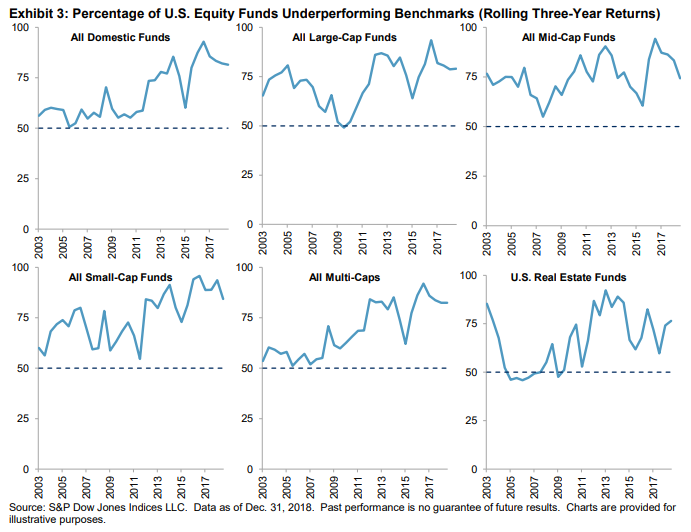 You would be hard pressed to find 10, 15 or 20 year periods where index funds aren’t in the top quartile of fund performance figures. Keeping fees and turnover low in a strategy that never changes is a tough combination to beat as costs compound against you over time.

There are benefits to being this kind of “average” in other areas of your life as well.

Seth Rogen has taken part in many of my favorite comedy TV shows and movies over the past couple of decades: Freaks & Geeks (a classic), Undeclared (underrated), The 40-Year Old Virgin, Knocked Up, Superbad, Pineapple Express, and Neighbors.

Rogen and his writing partner Evan Goldberg have also written and produced many of these movies, giving them more control over how the projects turn out. For the most part, they’ve been smaller budget films than the typical Hollywood blockbusters but in 2011 the duo tried their hand at creating a big-budget superhero movie, The Green Hornet.1

According to a recent interview with GQ, it wasn’t a pleasant experience making the leap from small budget to big budget movies. Rogen was used to the studios giving them room to work but with the bigger budget came more oversight from the executives who were looking after their investment. That meant more scrutiny on the script, less room to experiment, and more supervision on the project as a whole:

Since then, Rogen and Goldberg have rarely strayed from their tried-and-true formula: “Twenty to thirty-five million dollars is where you’re never going to be their biggest problem. That’s literally what it is,” said Rogen. “As long as they’re making some $150 million movie that’s a fucking disaster, they’re not paying attention to us. We’re the smartest business decision they made that week, because they just don’t have to worry about us. A lot of our career is just based on not being their biggest headache. Every once in a while, I meet someone, or one of my friends, [who] is their biggest headache, and it’s like, ‘Oh yeah, thanks to you, we can do whatever the fuck we want.’ ”

This is a wonderful description of staying in your lane. Rogen and Goldberg found a formula that works for them. Why mess that up? What’s the point of doing bigger movies if the studios won’t let you make the movie you want to make?

There’s something to be said for having control over both your life and career when it comes to happiness and contentment.

David Owen discusses the idea of True Net Worth in his book The First National Bank of Dad. Owen makes the point that your financial net worth doesn’t do much for your day-to-day happiness. Sure, money can make your life easier but there are other factors that go into the value equation of the way you live your life.

Owen is a golf writer and said being on the golf course a couple of times a week plays a huge part in his overall level of happiness. Owen wrote, “If I took a job that kept me off the golf course during the week, my financial net worth would rise but my True Net Worth would plummet.”

Taking a job that pays more money, with more responsibilities sounds great until you realize everything that comes with it. What’s the point of all the money and power in the world if you still can’t do the things you love doing?

Vishal Khandelwal at Safal Niveshak wrote an excellent piece this week about being average in the age of alpha:

More than twenty-five years have passed since I started considering myself as an average person with average capabilities and average ambitions in life. Somehow, being like this in the world where people are seeking alpha, keeps me happy and satisfied with myself.

In fact, when my kids asked me a choice of name for myself if I were a superhero, I could not think of anything else but “Average Man.”

Keeping my head down, working on things I love doing, spending time with people I love, and not worrying where the race is headed and where I stand in ‘alpha-dom,’ I think has kept me somewhat sane over the years.

This has helped me in my investing too, where not chasing “above-average” returns has helped me stay away from hot sectors and stocks for most of my investment career, and in turn achieve adequate returns that have helped me meet my goals so far without having to resort to any heroics.

Everyone loves a good hero but being all things to all people eventually leads to criticism and blowback too. I’m not saying people shouldn’t strive to improve their lot in life. There are advantages to being the top dog. But there are also a lot of responsibilities and some people simply aren’t cut out to be extraordinary in every aspect of their life.

Being “average” might not be enough for certain people. And that’s fine too. There are many type-A personalities who desire or need the spotlight.

But there’s something to be said for finding your niche in life and realizing when enough is enough.

When you find that place, contentment is a worthy consolation prize as it often leaves you in a much happier place than the person who is always constantly in search of more.

Further Reading:
Being in Control of Your Own Time

1I saw it. Not good but not terrible.