David McWilliams from the Financial Times had quite the headline on Friday:

Quantitative easing was the father of millennial socialism

He cites a number of studies that show a majority of young people prefer bigger government and he places the blame squarely on the Federal Reserve:

Ten years ago, faced with the real prospect of another Great Depression, Mr. Bernanke launched QE to avoid mass default. Implicitly, he was underwriting the wealth of his own generation, the baby boomers.

Mr. Bernanke’s unorthodox “cash for trash” scheme, otherwise known as quantitative easing, drove up asset prices and bailed out baby boomers at the profound political cost of pricing out millennials from that most divisive of asset markets, property. This has left the former comfortable, but the latter with a fragile stake in the society they are supposed to build.

This is an interesting theory. I think it’s partially correct but misses a bigger piece of the puzzle here.

Plenty of people, myself included, assume the government didn’t do enough to help homeowners during the crisis. That it was all the bankers who were the biggest beneficiaries of the bailouts.

I still can’t believe none of those crooks went to jail who helped lever up homeowners and the real estate market by creating CDO-squared and the like. It’s preposterous how much money some of the bank executives made during the real estate bubble without any ramifications for their actions in lending a helping hand in blowing that bubble.

And the Fed missed plenty of warning signs as things got out of control in the mid-2000s. I’m no Fed apologist but would people really prefer the alternative? Should they have allowed the country and global economy to go into a depression?

The Fed was really the only adult in the room at the time because our politicians didn’t want to respond with enough fiscal policy. It was like Bernanke and crew were in a rowboat with two oars but they only had the ability to paddle on one side of the boat while the other side was left vacant.

The real sources of anger from the younger generation likely stems from the fact that the bankers benefitted the most from the bailouts and received preferential treatment over homeowners when stuff hit the fan in 2008.

There are no counterfactuals but the alternative isn’t as appealing to young people as it may sound at first glance. Yes, lower home and asset prices would seem to be helpful to those in the early stages of their careers as they slowly trade human capital for financial assets.

But you know what else this would mean?

Much higher unemployment (good luck buying a house and stocks with no job).

Even lower wages (wages have finally gotten a bump in the latter part of this recovery).

Lower asset and home prices in this Bizarro World scenario would also mean people from the older generation who would like to retire in the coming years would be in even a bigger world of hurt financially than they already are. Pensions would be in the same boat, putting them in an even worse position for those who stand to receive them.

This would have had ripple effects which may have made things even harder on young people (if the older generation is forced to work longer that could mean fewer jobs for millennials).

Maybe the only silver lining in all of this is the next time the stock market crashes it won’t have an outsized impact on the majority of the country. Maybe a market crash is the only thing that can (temporarily) slow down wealth inequality.

It’s also time to stop treating all millennials like little kids. I’ve been told that technically I am a millennial. I’ll be 38 this summer. Millennials are growing up. They’re getting jobs. Yes, they’re dealing with student loans and more expensive housing but they’re also doing what people do when they grow up — settling down and buying houses. 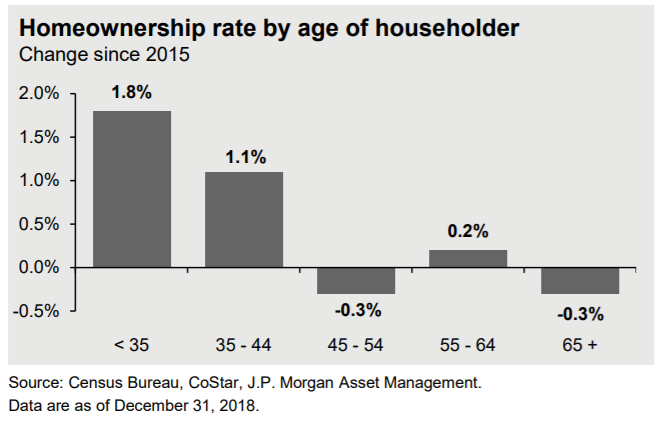 I expect this trend to continue in the coming years. This is what happens when young people get older and have more responsibilities.

Housing may not be as affordable as it was for our parent’s generation, but mortgage rates are much lower and I expect people will figure out a way to make it work.

Expensive housing and asset prices aren’t the ideal situation for young people. And I’m definitely in the camp that baby boomers have screwed over the next generations in a multitude of ways (maybe they can make up for it by giving their kids money for a down payment).

But I’m not sure the alternative to the financial crisis would have led to better outcomes for young people. They still need the money and gumption to buy financial assets when they go on sale.

And it’s time for young people to stop blaming others for their problems.

The government is not going to solve all your problems. Neither is the President. Or Congress or the Illuminati.

For better or worse, you’re mostly on your own, especially when it comes to your financial situation. Proceed accordingly and take care of business in the areas you have control over in life.

Further Reading:
How Millennials Can Prepare for the Next Financial Crisis