A few weeks ago I urged readers to get used to the fact that recessions are a fact of life that they need to get used to every 4-10 years or so. I shared the following table with each recession since the late-1920s: 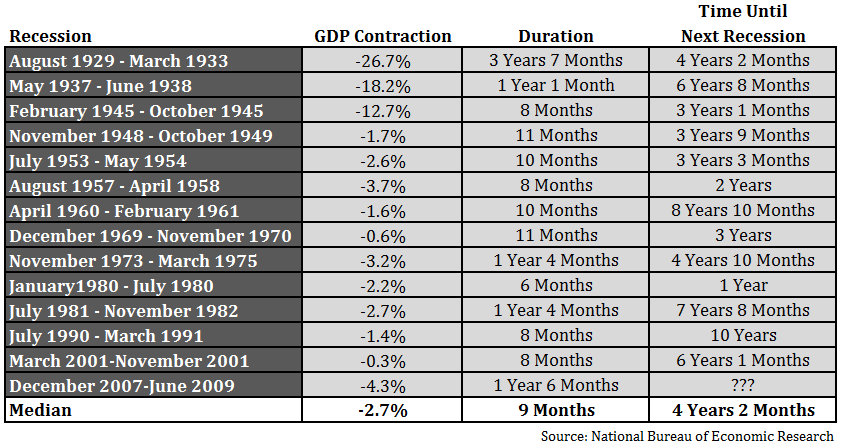 The next logical step from here is the see how stocks performed in and around these past recessions. I only have monthly S&P 500 returns going back to the mid-1950s, but that was good enough to show the total returns leading up to, during and after each of the past nine recessions:

This is another piece of evidence that shows why investing during periods of unrest usually pays off for investors. Three years out from a recession the annual returns showed an average annual gain of 11.9%. Five years out the average annual gain was 12.3%. Only one time since 1957 was the stock market down a year later following a recession, which occurred during the 2000-2002 bear market.

During the actual recessions themselves the total returns look much worse as they were negative, on average.  But this average is made up of a wide range in results, as stocks have actually risen during 4 out of the last 9 recessions. And stocks were positive 6 out of the past 9 times in the year leading up to the start of a recession, dispelling the myth that the stock market always acts as a leading indicator of economic activity.

All of which is to say, what these numbers really tell us is that, in general, stocks tend to perform below average in the year leading up to and during a recession and perform above average in the 1, 3, and 5 years following the end of a recession (with the usual caveats that there are always outliers and this is a small sample size).

So all you have to do is figure out how to predict the next recession and you’ve got it made. Easy, right?

Brett Arends of MarketWatch (who himself was trying to figure out if we were already in a recession in late-2012) showed why it can be so difficult to predict recessions in real-time:

Remember the Great Recession that began in December, 2007? The economists at the National Bureau of Economic Research, who are basically the official scorekeepers of recessions, didn’t discover the recession until December, 2008 – a year late, and only a few months before the episode (officially) ended.

The previous recession began in March, 2001 – but the NBER didn’t call it a recession until November 26 of that year. By amazing coincidence, that was actually the month it ended (as they told us many months later).

We’ll go into another recession at some point. There’s a strong possibility that stocks could show underwhelming performance when it happens based on the strong gains U.S. stocks have shown over the past six years. Or maybe they’ll fall before the business cycle slows. We’ll see. Investor expectations are fickle.

Every market and business cycle is unique, as anyone who has been trying to handicap the current rally can attest to.

UPDATE: With a little help from Wes Gray at Alpha Architect I was able to put together the data set going all the way back to the Great Depression. Here are those results along with the averages over the entire period:

Source:
Are we already in a recession? (MarketWatch)

Further Reading:
When Will the U.S. Have Its Next Recession?
Inflation is a Relatively New Phenomenon