December was an awful month for stocks.

The S&P 500 fell up to 15% at one point, culminating in the Christmas Eve shellacking which saw stocks fall almost 3% a day after they had fallen 2%. Stocks did rally more than 6.5% from that point until the end of the month.

All told, the S&P was down almost 9% for December and fell 19.8% from the end of September through the close on Christmas Eve.

A family member joked on Christmas he was going to have to sell his house to make ends meet now that the stock market was crashing.

Through the close on Thursday, the S&P has now rallied more than 15% off the lows.

I’m guessing this relief rally has to make stock investors feel much better about themselves but this didn’t have to be the way things worked out. In an alternate universe, stocks continued to crash or stayed volatile and went nowhere, offering little hope for investors looking for a reprieve from the selling.

Here’s what these different paths may have looked like: 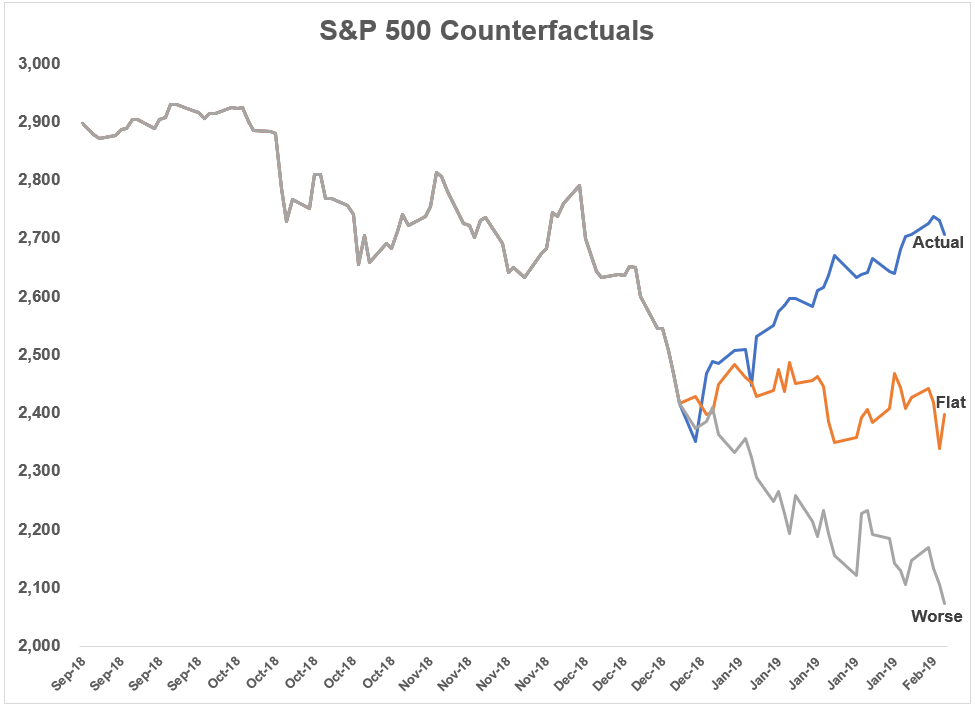 The average bear market since WWII is a downturn of roughly 34%, which is what’s shown in the worst-case scenario here. A choppy market may have been even harder to stomach because it provides temptation to do something, anything, to make something happen.

Luckily, we didn’t have to contend with those scenarios but we will at some point. Stocks will crash beyond 20% in the future. There isn’t always going to be a nice V-shaped bottom where stocks rally immediately after they’ve fallen.

Getting bailed out by a swift rally in the stock market is not a plan. Eventually, there is going to be an extended downturn. It doesn’t have to be of the 2008-variety but even run-of-the-mill bear markets can last upwards of 18 to 36 months.

I don’t know if Christmas Eve was the bottom before new all-time highs are breached yet again or just a bottom in a longer-term downtrend.

But if you were one of those people who were ready to sell all of your belongings simply because stocks dropped 20% in three months or so, you’ve been given a gift in the form of this rally.

The time to reassess your risk tolerance is not when stocks are falling. By that point, it’s already too late for most people because the likely outcome is an overreaction.

The time to think about risk is when there is none. Think about how you can survive a downturn when stocks are rising and you feel good about yourself, not when they’re falling and it feels like the world as we know it is coming to an end.

Your current profits can be vaporized at any moment. If you underestimated your threshold for pain before volatility reappeared in 2018, now is a perfect time to reassess.