In my first book I went through 14 market myths using history as a guide. Myth #9 was that all-time highs in the stock market mean it’s going to crash. I shared the following:

The S&P 500 hit new all-time highs in early 2000 and subsequently crashed by more than 50 percent over the following two years or so. New highs were once again breached in late-2007, which was then followed by another 50 percent-plus decline. Looking back on this decade, many investors assumed there was a clear relationship between all-time highs in the stock market and the risk of a future crash. It seems every time the market shoots to new highs it subsequently gets cut in half.

Nothing in the markets is ever quite that easy. Of course, stocks can fall from all-time highs, but hitting an all-time high isn’t necessarily the trigger that causes them to fall. Since 1950, there have been over 1,100 all-time highs reached on the S&P 500. That’s good enough for almost 7 percent of all trading days or roughly one out of every 15 days that the market is open. Here is the breakdown by decade that shows how often the S&P 500 hits a new high level: 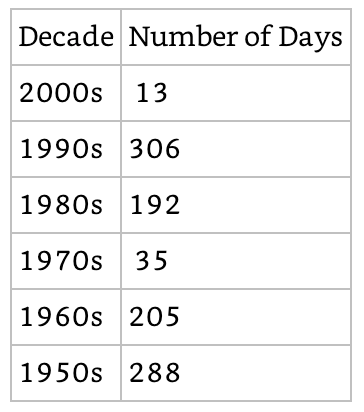 You can see that there were some droughts during certain decades. It took almost eight years to reach a new all-time high from early 1973 to late 1980. It was another seven years or so from March of 2000 to May of 2007. It took another five and a half years to reach the 2007 high, which occurred in early 2013.

Little did I know how many new all-time highs would subsequently be reached in short order after writing this.

Since new highs were hit in 2013 there have been 201 new ATHs in total. This year alone there have already been 13 new all-time highs on the S&P 500, the same number that was seen in the entire decade of the 2000s. It’s not even the end of January.

Stocks are already up almost 8% this year and that’s after 9 straight years of gains (with 7 of those annual returns in double-digit territory). It’s been almost 20 months since we saw a 5% correction.

The steady number of new all-time highs in the market coupled with a lack of losses or volatility have made it feel like risk doesn’t exist anymore. Every year since 2009 people have been saying the easy money has been made but it feels like every year making money gets easier.

I think we’ll look back at this market environment in the future and be astonished at how this all transpired coming off the worst financial crisis since the Great Depression. Obviously, this can’t continue forever but regardless of your current bullish or bearish leanings, you have to be able to appreciate the unreal run stocks have been on.

But markets like this can be terrible for investors because they often teach us bad habits.1 Just think about what has worked well during this cycle:

One of the reasons successful investing is so difficult for many investors is because rational thinking doesn’t always pay off. Extremes in the markets tend to make investors look silly.

Diversification, risk management, and the avoidance of chasing past performance are all prudent forms of an investment process. But sometimes prudence doesn’t pay in the markets and risk-seeking behavior offers the best payout.

The problem for investors is that the majority of us are terrible at timing these risk regimes because no one has a clue how long they will last or when the painful reversals will take place.

Investing is hard because risks aren’t really risks until there are outcomes attached to them. I also wrote the following in my book about risk:

Risk really only matters if it has consequences attached to it, either through a liquidity event because you’re forced to sell or psychologically because you make a huge mistake at the wrong time.

In this sense, true risk is that which is irreversible.

History has shown that all-time highs are not meant to be feared but accepted as a normal part of the long-term improvement in corporate earnings and technological innovation. But they can’t continue unabated at the current pace without some sort of setback eventually.

There haven’t been many poor outcomes in the stock market for a long time now. Investors who have taken on more risk than they can mentally or financially handle haven’t had to deal with the consequences. The longer this lasts the worse it’s going to feel when the ‘risk’ in ‘risk premium’ comes back to life.

1Plenty of investors learned the wrong lessons from the last bear market, as well, namely that the next crash is always right around the corner.