The biggest hole in my resume as an armchair TV critic is the fact that I never watched The Sopranos. I’m currently remedying this situation on the HBO Go app starting with the first season.

I noticed a couple of episodes had some stock market talk sprinkled in.

After a big score from a heist, Tony tells Christopher how to handle his newfound cash, “I’ve got three words for you — Initial. Public. Offering.”

In another episode, Tony and Carmela are at a neighborhood barbeque. Tony sparks up a conversation with the other husbands, two of whom happen to be stockbrokers. They quickly disclose some insider information about an imminent buyout opportunity and other stocks that could be going public.

The wives are all chatting about the market as well. A few of them talk about pending drug trials in some biotech names causing Carmela to ask, “You guys play the stock market?”

To which her neighbor replies with a laugh, “Oh we don’t just play…we win.”

Granted, the first season came out in 1999, so these conversations were a sign of the times.

But this got me thinking about how TV shows and movies portrayed the stock market and investing in general when I was growing up.

Trading Places was probably my first exposure to the markets:

In a computerized world, it’s hard to believe how archaic things were back in the day when people were literally screaming orders at each other on the trading floor. I suppose this scene is a decent approximation of my all-time favorite market cartoon: 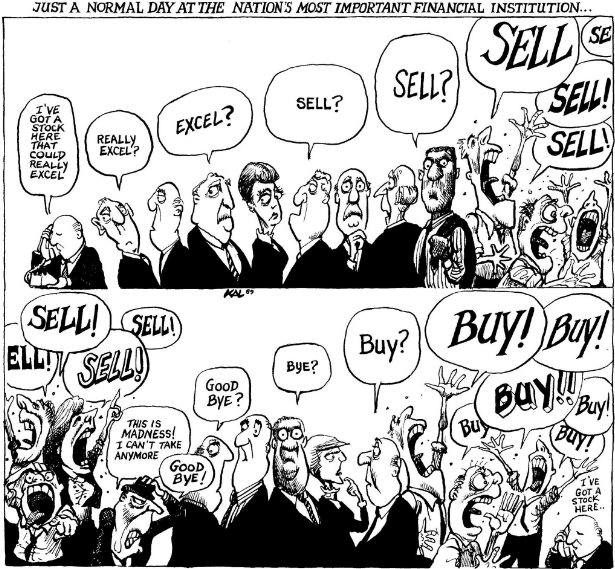 This was also an early lesson in event-driven investing. Movies and TV shows like to show a singular catalyst for every single move in the markets. It’s hard to believe but true that so much of what happens each day is more or less random in that there isn’t a catalyst moving prices beyond competing ideas, opinions, time horizons, risk appetites, and emotions.

I still remember the Seinfeld episode where Jerry buys a stock based on a recommendation from George’s broker and immediately regrets his decision:

It’s amazing how often people assume one person’s knowledge about a company or situation could have any bearing on where a stock is heading in the future, especially over the short-term. As if a broker’s knowledge of the situation could ease the pain of loss or assure Jerry everything would be all right.

I know sitcoms had a 22-minute window in which to work but I always laugh at how absurd the premise is when someone buys a stock and tracks its every move over the coming days like that’s a reasonable time horizon for an investment.

Jerry also didn’t understand the concept of compound interest (from that same episode):

Boiler Room is one of the most underrated movies of the 2000s (killer soundtrack as well). You had a pre-Fast & Furious Vin Diesel, Ben Affleck’s ridiculous training speech to the incoming brokers, and a plot that more or less called the top in shady brokerage practices from the 1990s (not that they’ll ever completely go away but it seems to have been downhill ever since).

This movie has some fantastic quotes:

“I had a very strong work ethic. The problem was my ethics in work.” – Seth Davis (Giovanni Ribisi)

“And there is no such thing as a no sale call. A sale is made on every call you make. Either you sell the client some stock or he sells you a reason he can’t. Either way a sale is made, the only question is who is gonna close? You or him?” – Jim Young (Ben Affleck)

Scenes like this are the ones that stand out to me from the movie though:

I understand technology was not what it is today but it still boggles my mind that people used to buy stocks this way.

Someone would call you on a LANDLINE phone.

You would have no idea who they were.

They would freely offer you up juicy investment ideas.

Then you would pay them a substantial fee for the information when buying the stock.

I didn’t watch Wall Street with Michael Douglas until I was well into college:

Okay, this one was actually pretty dead on.

Much of this stuff is extremely outdated when it comes to their portrayal of the markets but this got me thinking — what about today’s world of investing will seem antiquated a couple decades out.

Here are some ideas: