The latest macro worry from the past week deals with auto loans.

According to the Federal Reserve Bank of New York there are more than 7 million Americans who are 90 or more behind on their car loan payments. That’s a million more people than at the end of 2010.

This has led a number of prognosticators to wonder aloud whether this means the expansion is on the edge of rolling over. Others are worried this is a prelude to a crash similar to the subprime mortgage mess.

After all, subprime was just a small piece of the market and it was “contained” and we all know how that worked out.

I don’t pretend to be an expert on auto loans nor do I play one on TV. But conflating auto loans with housing loans seems like a bit of a stretch to me.

Let’s take a look at some graphs to see why.

First of all, it’s true that auto loan debt has risen substantially in recent years even while total sales have fallen: 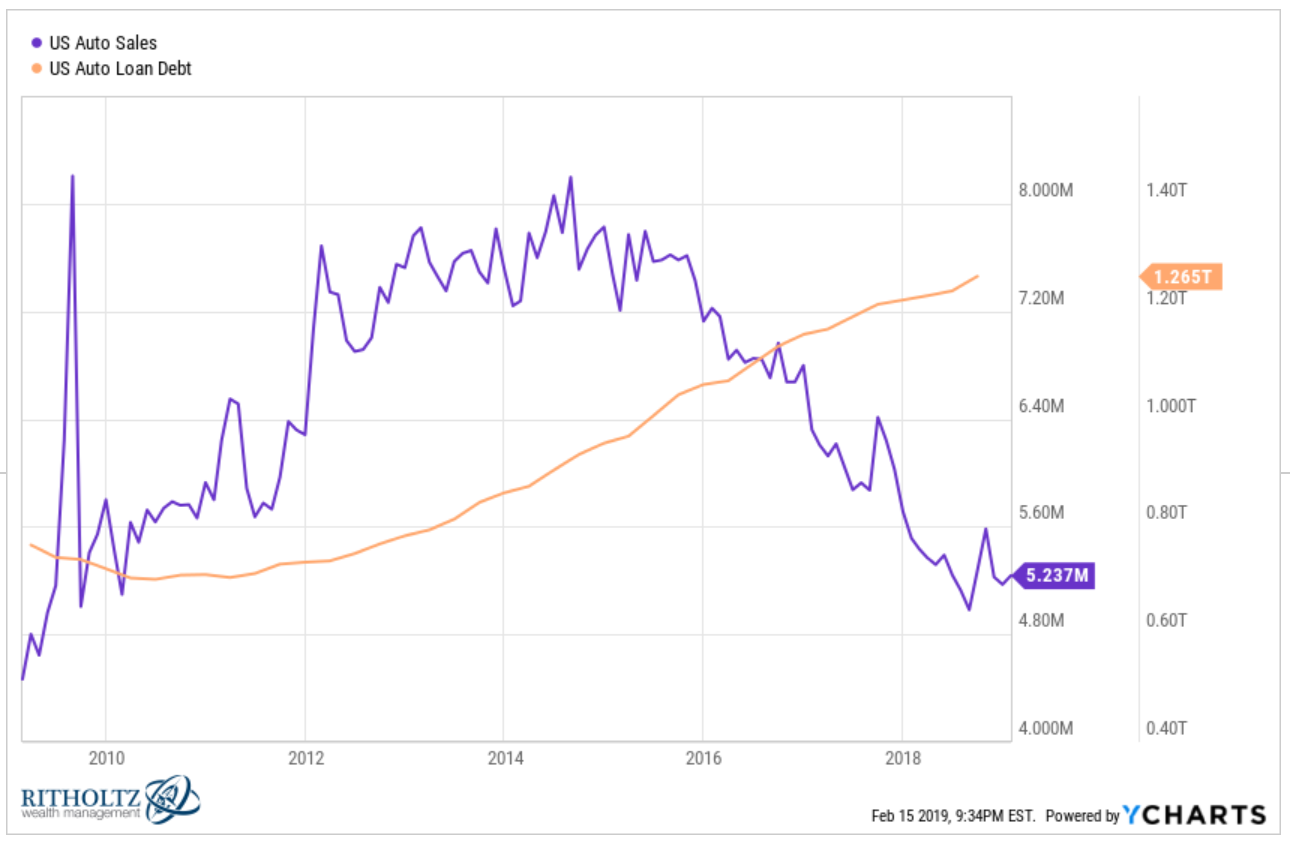 As you can see here, auto loans have almost lapped credit card debt and are hot on the heels of student loans: 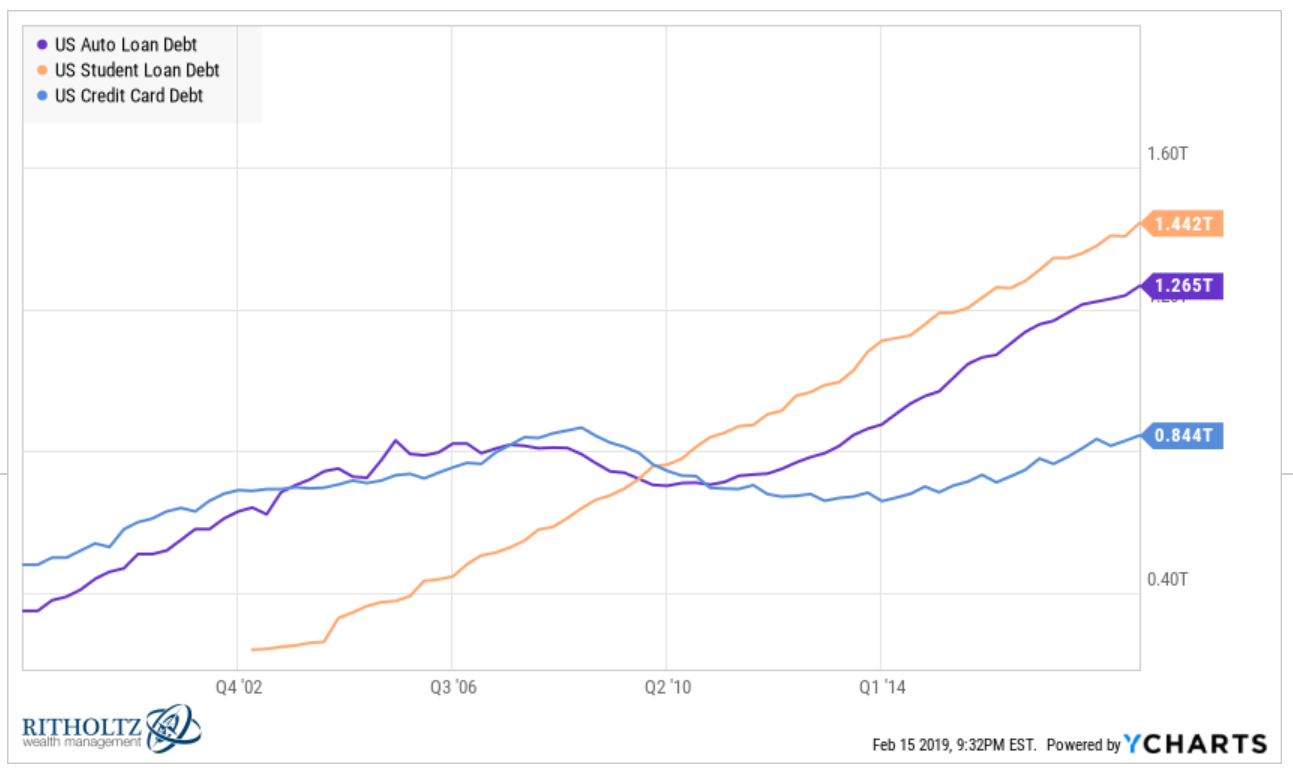 And the delinquency rate is certainly rising within these loans: 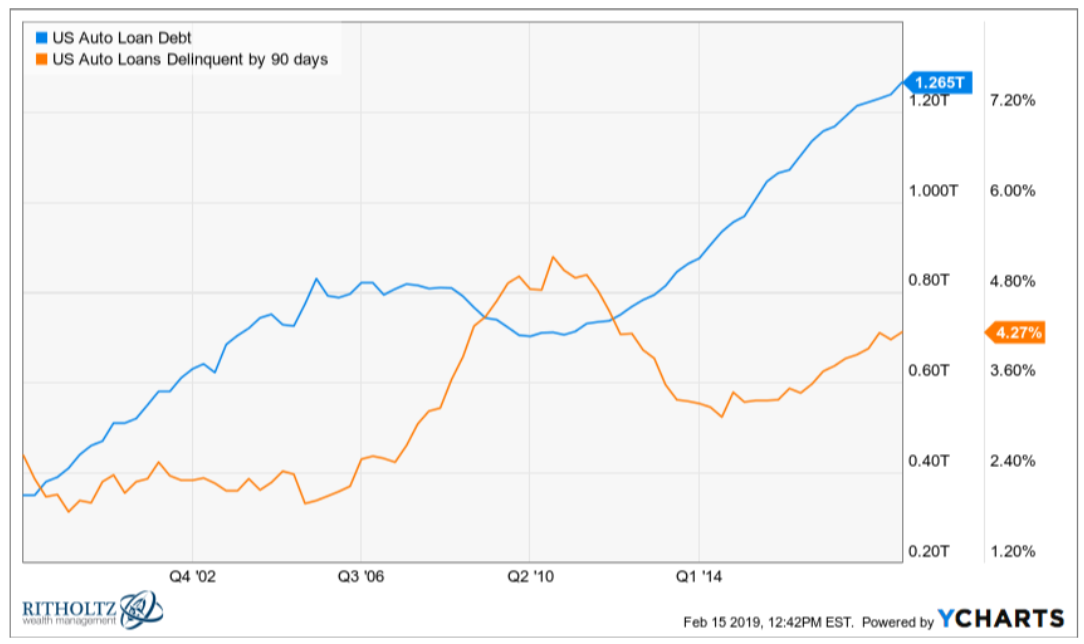 But it’s worth pointing out that while the delinquency rate is rising it’s still below the rates seen at the height of the crisis. And with the enormous increase in auto loans overall, you would assume more of those loans would eventually go bad.

Now look at the growth of auto loans in comparison to total household debt and student loans over the years: 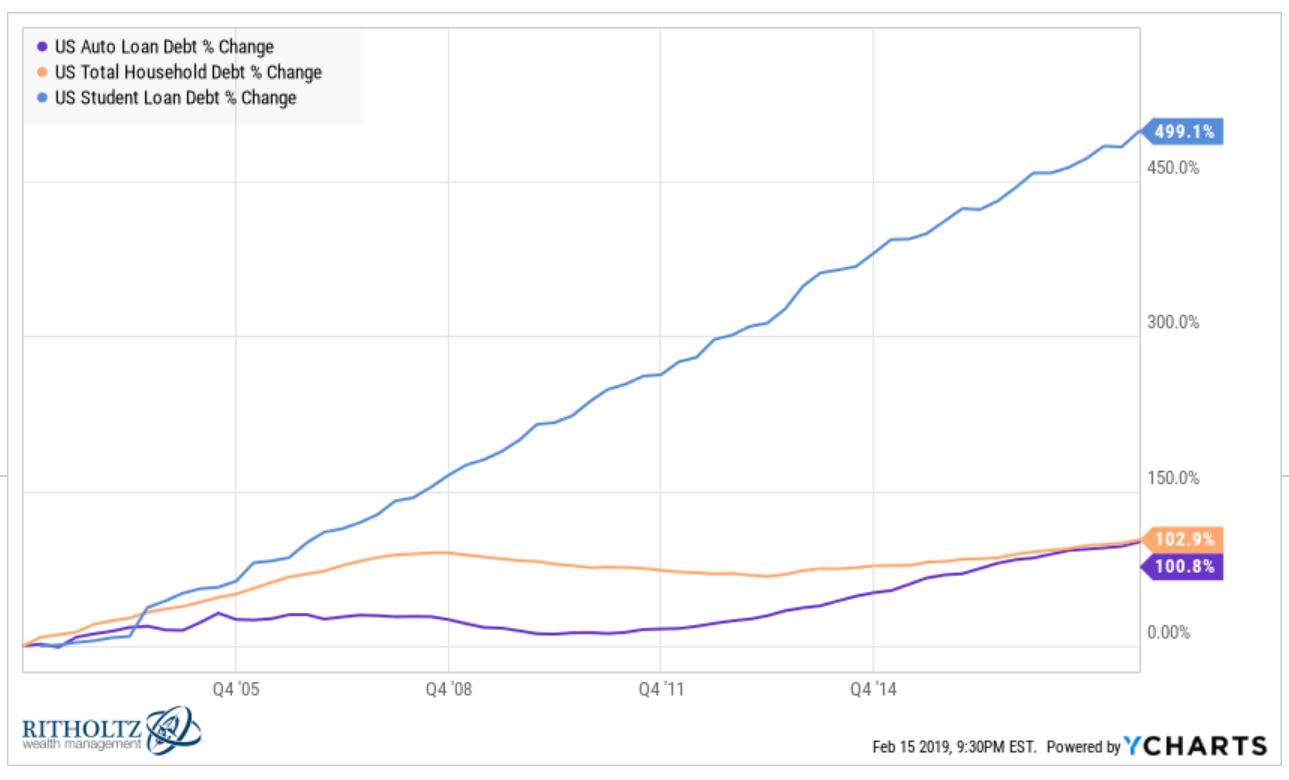 Auto loan growth has tracked fairly closely to the growth in total household debt over the years (while student loans are in their own stratosphere).

Now look at the various borrowing categories as a percentage of U.S. total household debt:

Again the ratio is rising but the auto loans category is well within the bounds of the historical range since the turn of the century.

And look at the delinquency rates of the four main debt categories: 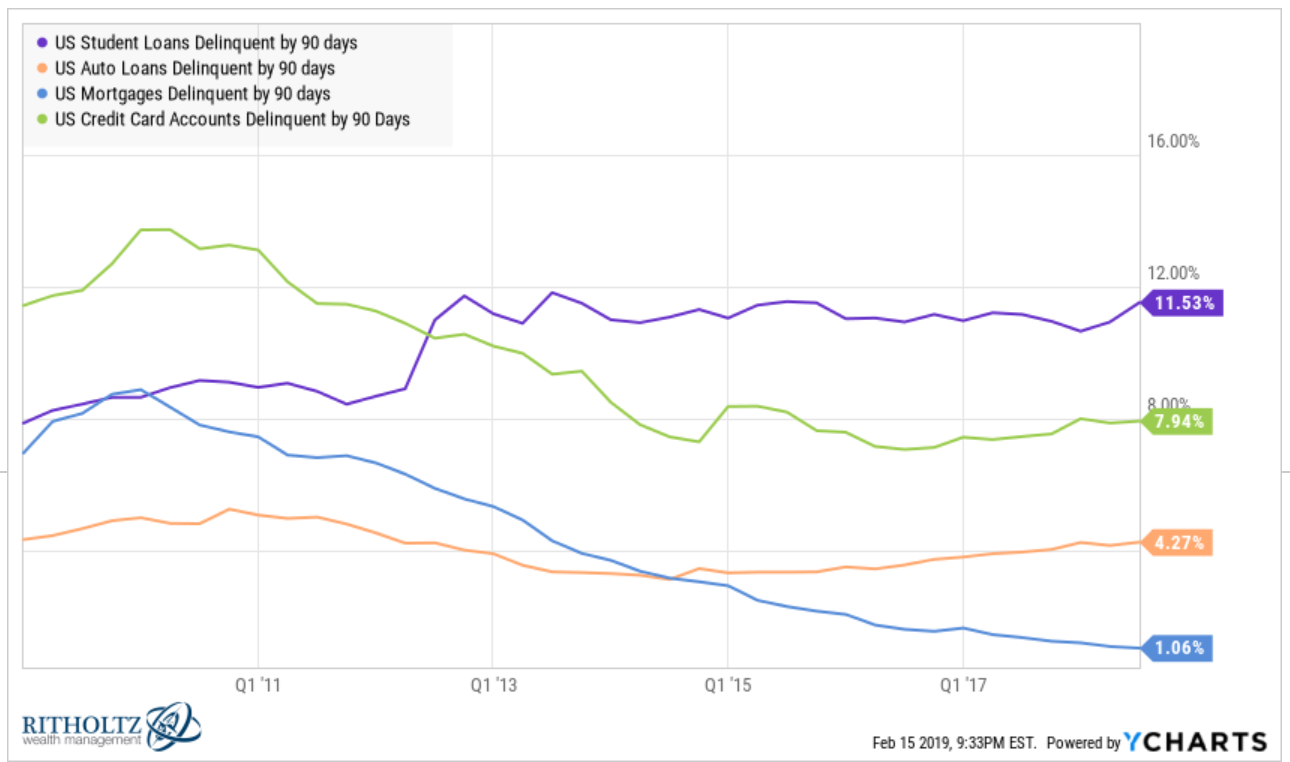 The current auto loan delinquencies don’t exactly jump off the chart when compared with student loans or credit card debt. And look at how low that mortgage delinquency rate is.

Mortgage debt makes up more than 70% of total household debt, while non-housing debt is just under 30% of the total: 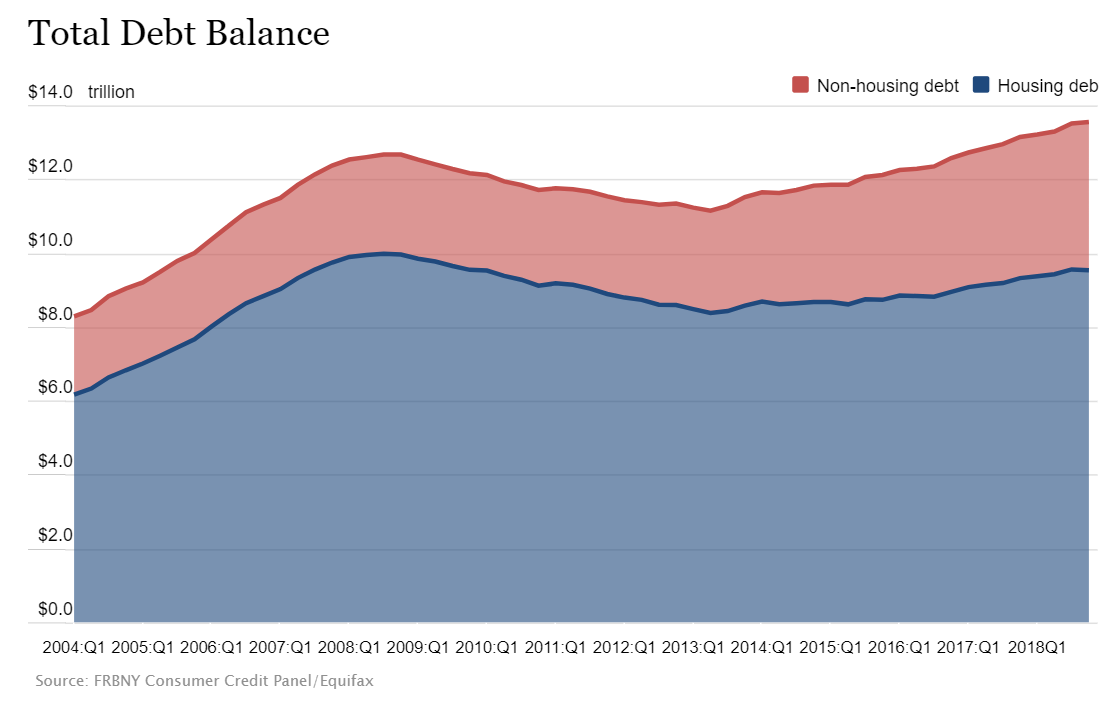 Breaking things down even further, auto loans are by no means a rounding error, but they make up less than 10% of total household debt: 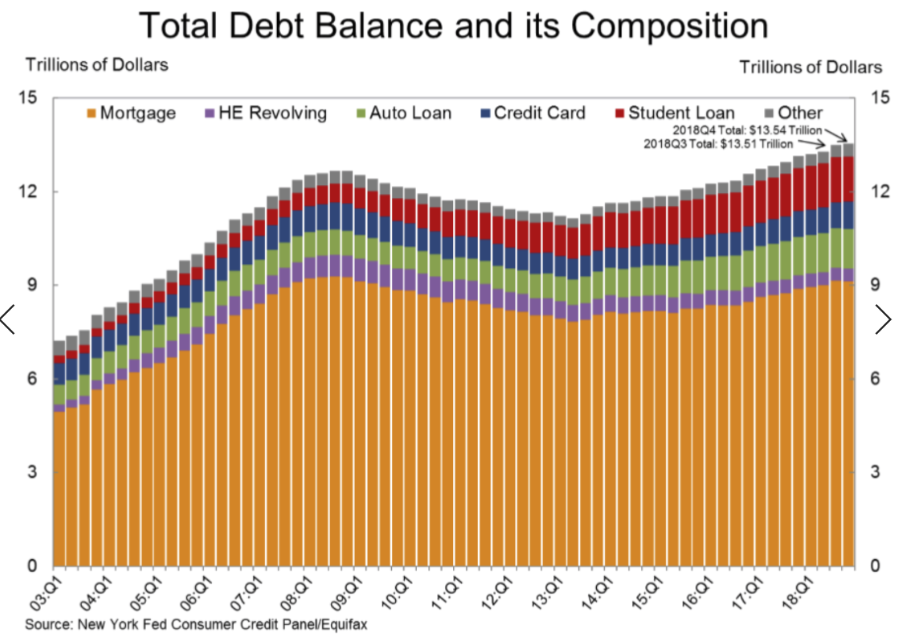 I’m not saying it’s not a touch concerning that more people are getting behind on their car loans. That’s not great news by any means.

But do the latest numbers mean we’re heading back into the abyss of a 2008-like economic calamity?

Anything is possible but conflating auto loans with mortgage loans isn’t a great idea. They’re not in the same ballpark.

The fact that mortgage debt makes up such a huge part of the overall household budget is one of the main reasons the Great Financial Crisis was so painful. For the majority of Americans, a house is by far their biggest asset: 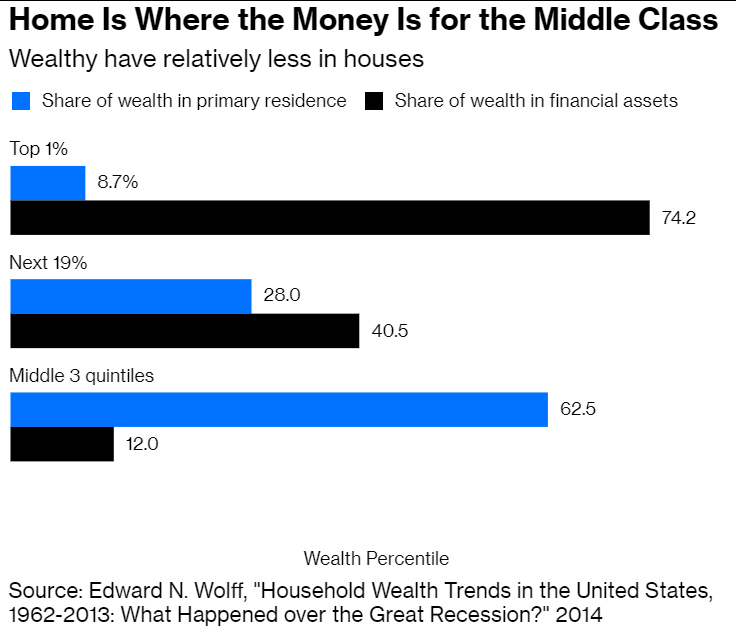 This is why people biting off more than they could chew in terms of housing debt and falling home prices made such a wicked combination during the crisis for so many people.

Auto loans don’t have this kind of impact. So even if things get worse in the car loan space it’s hard to see it having the same impact as similar problems in the housing market.

Every time we experience patches of economic weakness many assume it’s a surefire signal we’re heading for another massive financial crisis. We will have massive economic shocks in the future but far too many people are still too hung up on the 2007-2009 contraction.

I wouldn’t be going out on a limb to suggest there’s a decent percentage of the population who have overextended themselves on a vehicle purchase. The fact that something like 70% of all car sales in America is now expensive trucks and SUVs almost assures this.

So if we really want to be concerned about something, I would be more worried about people spending a large chunk of their budget on a depreciating asset than a major economic crash.