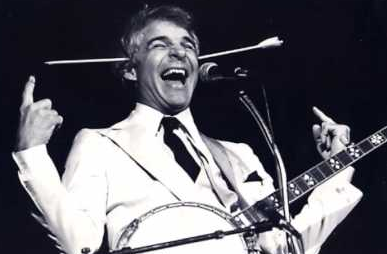 In the late-1970s and early-1980s, Martin was perhaps the most popular stand-up act in the world but it almost didn’t happen. He made a promise to himself that if he wasn’t successful as a writer or entertainer by age 30 he would give up his showbusiness dreams and get a real job.

When that self-imposed target date came and went without reaching much success he decided to give it a little longer because, in his mind, he was making strides. As he honed his craft his act got bigger and better. Shows grew from a handful of people to hundreds to thousands to tens of thousands.

At the height of his popularity, when he was selling out shows in every city and making more money than he ever thought was imaginable, Martin wasn’t as happy as one would expect:

Though the audiences continued to grown, I experienced a concomitant depression caused by exhaustion, isolation, and creative ennui. As I was too famous to go outdoors without discomforting hoopla, my romantic interludes ceased because I no longer had normal access to civilized life. The hour and a half I spent performing was still fun, but there were no band members, no others onstage, and after the show, I took a solitary ride back to the hotel, where I was speedily escorted by security across the lobby. A key went in a door, and boom: the blunt interior of a hotel room. Nowhere to look but inward. I’m sure there were a hundred solutions. I could have invited friends to join me on the road, or asked a feel-good guru to shake my shoulders and say, “Perk up, you idiot,” but I was too exhausted to communicate, and it seemed like a near-coma was the best way to spend the day. This was, as the cliche goes, the loneliest period of my life.

After playing out the remaining shows on his schedule, Martin walked away from stand-up at the height of his popularity to pursue movies. The Jerk, which is an 80s classic, was bourne out of his stand-up routine.

I’m sure some people would like to play the world’s smallest violin for Martin’s feeling in this story. These are some of the unintended consequences that come with fame, money, and influence.

But the point here is that you never know what’s going on in someone else’s head or where their personal struggles lie.

This week I read a profile of Farnam Street’s Shane Parrish at Growth Lab. Much of the piece talked about the huge success with his website, podcast, and consulting business but he was also shockingly honest about the personal side of his life that isn’t always perfect:

In our annual letter to readers last year, I pulled back the curtain and showed people what they don’t see about me. From the outside, you think “oh man Farnam Street is growing 50% year-over-year.”

But you miss so much when you only see curated reality. Here’s what you would have missed about my year: My biological father wants nothing to do with me. I’m divorced. I cry on my couch sometimes. It’s like social media is this curated view of the best of everyone.

I agree with Parrish that social media has likely made it much harder to separate the difference between what we see on a screen and reality. Everyone’s life looks amazing on Instagram but you have no clue what’s going on behind the pictures and cheesy hashtags.

There’s a line that goes something along the lines of unless you’re willing to take everything, the good and the bad, don’t even begin to want even a piece of someone else’s life.

It’s good to remind yourself every once and a while that no one’s life is perfect. Everyone has their struggles in some capacity or another.

One of the simplest rules in life is often times one of the hardest to implement: be nice to other people. You never know what they’re going through.