1. What if gold dies out with the boomer generation? The market value of gold around the globe is estimated at more than $7 trillion. I understand some of the reasoning behind the fact that people still put a lot of faith in the yellow rock — it’s survived as a store of value for thousands of years and can act as an uncorrelated asset.

But isn’t it possible faith in gold could potentially die out with the older generations? Doesn’t technology present a massive risk to gold’s standing as a store of value going forward? I don’t know the answers to these questions and I think it’s going too far in the other direction to assume bitcoin or something similar will completely replace gold. But I don’t think you can rule out the possibility that gold’s value to society could be called into question in the decades ahead.

And cue the hate mail from the gold bugs…moving on.

2. How hard was it to invest in stocks in 2009? Investing in stocks seems like a lay-up looking back at some of the prices from 2009. But for anyone who lived through the financial crisis, investing at the point of maximum pessimism and its aftermath was anything but easy. A reader recently sent me these headlines as a reminder (there were plenty more as well):

Investing at almost any point in the cycle is hard because no one knows how far investors will take things in either direction. I don’t believe there are ever easy profits to be made. But if you’re waiting for the next crash to deploy capital, just remember that it won’t be so effortless to buy when everyone else is selling or trying to talk you out of it.

(I should also mention that we’ll be able to pick out headlines just like this telling us everything is fine right before the next crash so this works both ways.)

3. Why is it so hard to invest during a bear market? Vanguard had a nice research piece that broke down performance during the last two crashes by sector: 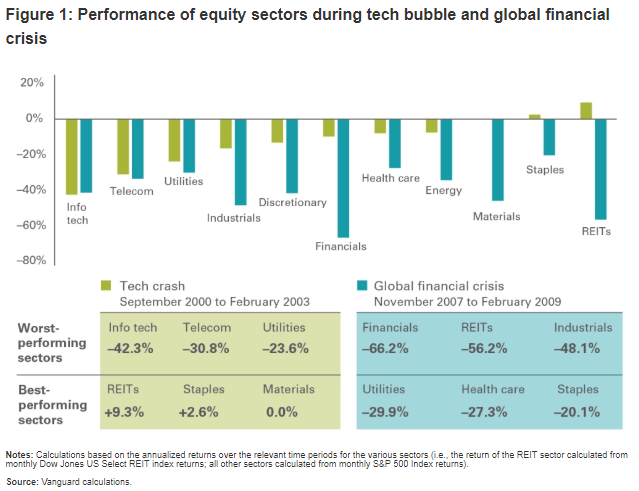 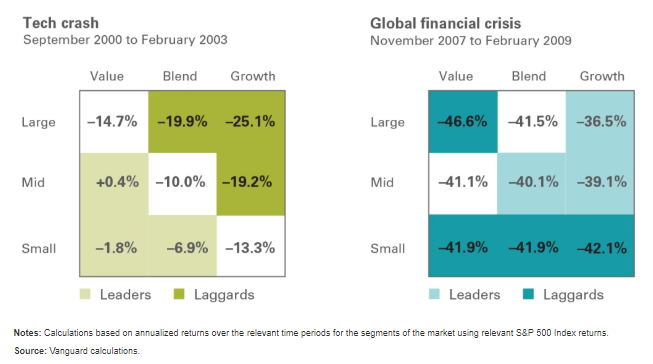 It’s hard enough predicting the timing of a bear market, but it might be just as hard to know which parts of the market will hold up better than others. No two market downturns (or upturns for that matter) are ever the same.

4. Is Amazon going to take over my closet someday? My wife shamed me into finally upgrading some of my workout gear since I’ve been using the same t-shirts since my college days. As I do with nearly every purchase, I went to Amazon and of course, they delivered:

It cost me $16 for two of these shirts and the quality was surprisingly good. This was much more appealing than paying Under Armour or Nike $45 or so for a t-shirt. I knew Amazon started selling a number of their own products but didn’t realize how many clothing options they had under the Essentials brand. There were shirts, shorts and pants in professional or casual options. I bought some swim trunks as well. Color me intrigued by Amazon as a clothing brand.

5. Is Jim Miller’s Origins on Alabama football the best podcast of the year? I’m not a huge fan of Alabama football or Nick Saban because they’re basically the Golden State Warriors of college football. But I have to respect the program Saban’s built. I’m such a fan of his process that I even included it in my book. Here’s an excerpt:

Saban doesn’t spend his time focusing on implementing the latest and greatest offensive and defensive schemes. Instead it’s about implementing the ones that are in place and executing. He asks his players to focus on their effort, not the results of the last play or even the overall ball game. The thought process is that if the effort and discipline are there, the results will surely follow. He actually deemphasizes a focus on winning, because he knows the process will eventually pay off. 3 He preaches to his players that they need to play without emotion and be disciplined enough to take care of their job. Obviously, Saban’s results speak for themselves. His maniacal focus on process has led to extraordinary outcomes, even though the outcomes haven’t been the main focus of his message.

Miller is the author of Those Guys Have All the Fun: Inside the World of ESPN, which I loved, and previously did a podcast on the history of Curb Your Enthusiasm that was excellent. I’m two episodes into this one on Saban and Alabama. It’s a phenomenal take on process, discipline, motivation, behavior and what it takes to win consistently.

6. Was this past Tuesday one of the greatest days ever on Twitter? If you’ve been living under a rock, Elon Musk tweeted out what has to be considered the troll of the century:

This tweet has everything — timing (out of nowhere), suspense (could this honestly happen?), unintentional comedic value (funding secured as a joke was beaten to death on Twitter almost instantaneously), and a potential crime (did he commit fraud by putting this out there?). I have no idea what comes next but if I was long or short this stock, I wouldn’t be too certain about my feelings either way.

7. What’s the solution to the retirement savings crisis? I read the following stat this week:

The average American aged 44 to 49 has $81,347 in retirement savings, according to the Economic Policy Institute. The median savings balance among that age group, however, is just $6,200.

I see similar ones on a regular basis.

People these days are good at listing the problems we face in this country but you rarely see legitimate solutions offered. I have some thoughts that could probably fill a book (strongly considering this) but I wonder how, when, and why we’ll finally tackle this problem. Maybe instead of a universal basic income, we need a universal basic savings account that puts money in a stock market index fund annually from birth to age 18 that you can’t touch until retirement age.

8. How do normal people afford to live in California? Zillow says next year there will be 23 cities in the U.S. where the median home value is $1 million or more. And 14 out of the 23 are located in California. These are obviously affluent areas with a heavy tech concentration but I don’t understand how “normal” people can afford to live and work in these cities.

It’s ironic that the tech companies have provided so many useful tools which allow people to live, work, and communicate from anywhere with an internet connection, but the talent pool is still concentrated in a single place.

California is gorgeous and has an ideal climate but I can’t see how this can possibly last (which is probably what people have been saying for decades).