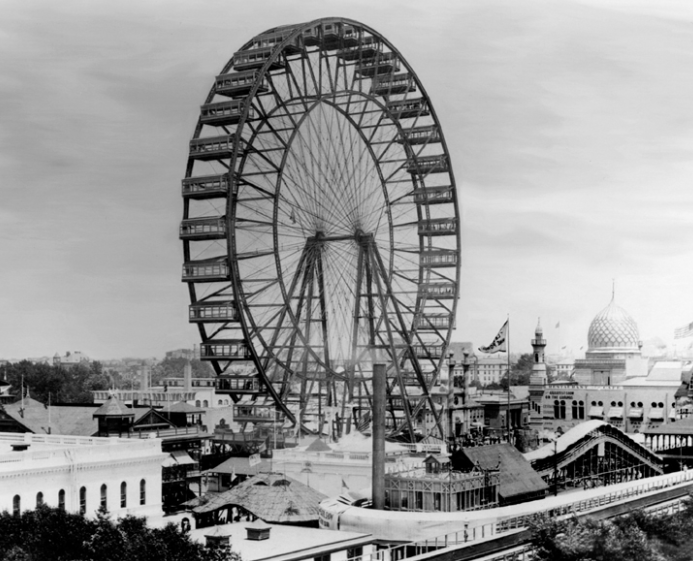 The World’s Fair took place in Chicago in 1893. It occurred during one of the worst economic panics of that century when economic activity fell almost 40% in a little less than two years from the combination of railroad bankruptcies, a run on the gold supply, and a banking collapse.

But the economic backdrop didn’t put a stop to one of the largest events in the history of the country. More than 27 million people attended the fair over the course of the 6 months it was open.

George Washington Ferris Jr. debuted the world’s first Ferris wheel at the fair which held upwards of 2,100 people at a time using 36 cars. It gave roughly 38,000 people a day a wonderful view of the 690 acre fair and all of the architectural beauty which was created exclusively for this event.

Clark Stanley was among those working at the World’s Fair but he was nowhere near the enormous Ferris wheel. Instead, he set up a booth off the beaten path. In the back of his booth he kept a sack of rattlesnakes. As spectators gathered around he would grab a snake and stick it in a pot of boiling water. Fatty remnants from the snake would rise to the top of the water, which Stanley would collect and mix into his famous elixir.

It was sold as a remedy for a number of different ailments from rheumatism, neuralgia, sciatica, lame back, lumbago, contracted muscles, toothache, sprains, swellings, and more. Stanley claimed to learn the secrets of his snake oil potion from the Hopi Indians which gave his “medicine” a good narrative.

Stanley was one of the early adopters of advertising to grab people’s attention. His own likeness, in a cowboy hat, was used for branding purposes. The ads promised it was, “A Wonderful, Pain-Destroying Compound” and “The Strongest and Best Liniment for cure of all pain and lameness.”

Obviously it did none of these things as Stanley was the original snake oil salesman.

The medical industry was extremely primitive at this time (Alexander Fleming didn’t discover penicillin until 1928) so you could excuse people for falling for the snake oil gambit.

But advertising can still trick people today by getting us to buy into narratives based on things like price, quality, scarcity and outlandish promises.

Tim Wu describes in his book, The Attention Merchants, how even innovation hasn’t allowed people to resist the siren song of advertisers:

For all our secular rationalism and technological advances, potential for surrender to the charms of magical thinking remains embedded in the human psyche, awaiting only the advertiser to awaken it.

The Wall Street Journal had one of my favorite examples of this idea in a story about Unilever earlier this year. Unilever was experimenting with the size of their haircare bottles and sought feedback from a group of beauty bloggers. They sent out small bottles of shampoo and conditioner called Evaus. One fashion blogger described it as “boutique and high end” after trying it out.

After trying Evaus, Ms. Harper was invited to a studio in Manhattan to be part of what she was told was a casting call to advertise the new brand. Halfway through an on-camera discussion, a producer let her in on the prank. Unilever made a video of her surprise reaction, along with those of other bloggers, and used it as part of an online campaign for Suave. Subsequent market research showed “a significant improvement in quality perception” among millennials, according to a spokeswoman.

All they did was take Suave shampoo and conditioner, which you can buy in 30-ounce bottles for like $3 (I know this because I use this stuff), put it in a smaller, prettier bottle, and spell the name backwards to give it some mystique.

The reason this worked is that many women are skeptical of lower-priced haircare supplies because they assume a lower price equates to lower quality.

The advertisers tell us a story (e.g. you get what you pay for or presentation signals quality) and we believe it because it helps justify our actions when overpaying for something.

I was listening to a Malcolm Gladwell podcast recently and he read a commercial for Fiji Water that went something like this:

1600 miles from the nearest continent

This sounds like a wonderful story to tell yourself every time you spend an obscene amount on a bottle of water. Fiji Water bottles also look pretty which is another way they get people to spend more money.

This week I read that Amazon is now a value stock:

Twenty-one years after it went public, a share of Amazon stock costs 70 times more than the company’s estimated per-share future earnings. That means investors are willing to pay much more for each dollar of Amazon’s earnings than for shares of Microsoft, Apple, Facebook, Alphabet or Alibaba. The everything store’s price-to-earnings ratio is four times higher than that of the S&P 500 index.

Yet even at this valuation, all but one of 52 analysts surveyed by Bloomberg recommend owning the stock, and 48 of them say that investors should buy it and keep it, according to data compiled by Bloomberg.

Which makes Amazon something few analysts ever believed it could become: a value stock, fetching a modest price considering the company’s opportunities for growth.

If you’re a self-proclaimed value investor who is sick of underperforming high-flying growth stocks, this is a perfect story to sell your investors as to why you’re not really exhibiting style drift. I have no problem with a flexible investing approach but Amazon is the definition of a growth stock. If you’re going to buy growth stocks but you pitch yourself as a dyed-in-the-wool value investor, just own the fact that you’re taking a detour in your process.

The advertising people figured out the whole human nature thing a long time before behavioral psychology found its way into finance. Just remember that they know you better than you know yourself in many ways.

Their job is to get you to surrender to the charm of magical thinking, as Wu so eloquently puts it.

Most of the stories we tell ourselves are being swayed by outside forces and human nature more than our own rational thoughts.

If you’re interested in learning more about the World’s Fair in Chicago, check out Devil in the White City by Erik Larson. It’s been out for a while but I just read it this year and loved it. Supposedly DiCaprio and Scorcese are developing a movie about the story which includes one of the most diabolical serial killers you’ve likely never heard of.