One of the common misconceptions I’m starting to hear from investors is that because we’re in a low interest rate environment, stocks either can’t or won’t fall very far from these levels. This is the TINA (there is no alternative) argument that says because over the longer-term bonds returns will be much lower from today’s yield levels, stocks should be supported because people have to put their money to work somewhere to earn a respectable return.

This theory does make a lot of sense when coming up with an explanation as to why the market has always seemed to have a bid under it anytime stocks started to fall over the past few years. But it would be a mistake to assume that this can go on forever and that risk won’t rear it’s ugly head eventually with another bear market.

The 10 year treasury yield dropped below 3% in late-2011 and although it briefly hit that level for a couple days in late-2013, rates have continued to stay low. There is a historical precedent for low interest rates that we can use for comparison purposes here. In June of 1934 the 10 year treasury yield dipped below 3%. It didn’t go back above 3% again until May of 1953, almost twenty years later, as you can see from the highlighted section of this long-term chart: 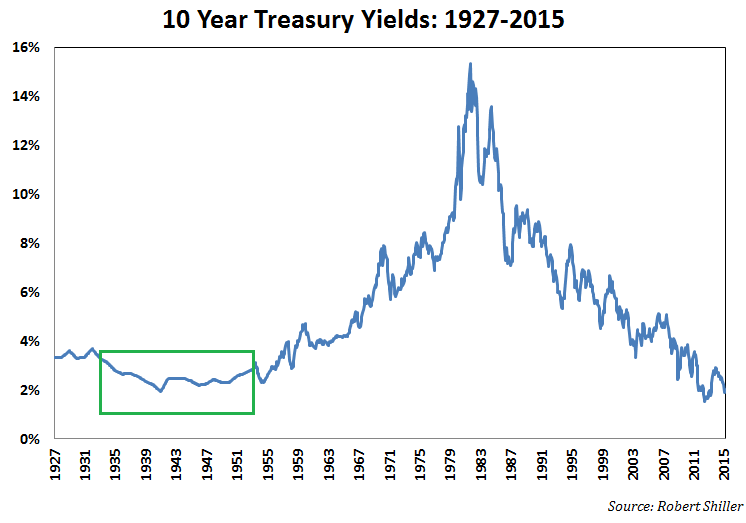 As you would expect from the low starting yield levels, bonds performance was underwhelming, with an annual return of just under 3% nominal or a loss of nearly 1% annually after inflation is taken into account.

Although rates were so low, setting up a possible TINA market back then, stocks were extremely volatile during this period. Each of the highlighted sections in this chart of the S&P 500 corresponds to a double digit loss: 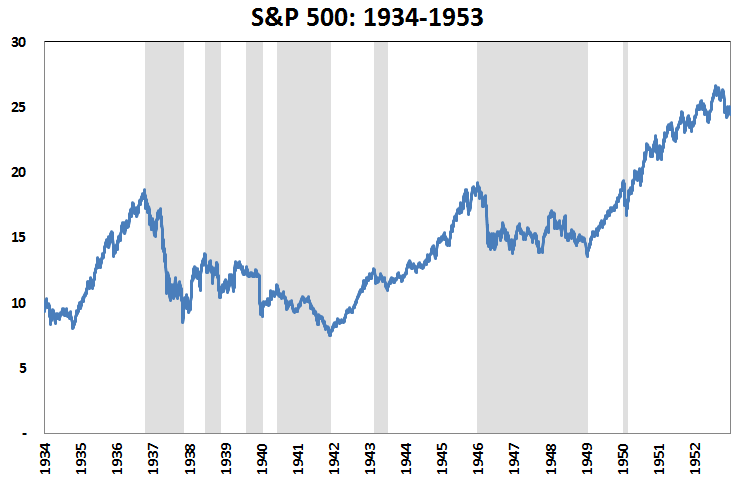 I counted seven different occasions where there were double digit drawdowns over this nearly twenty year period (and it could have been more had I counted the many stops and starts during the 1946-1949 drawdown). Here are each of those double digit losses, which included five separate bear markets: 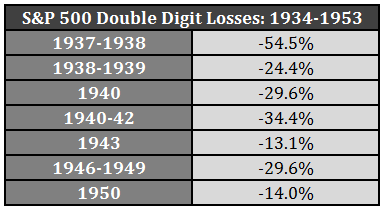 With all of these losses you would think investors couldn’t have possibly fared too well over the entire period. Yet with dividends reinvested, the S&P 500 was up a total of more than 600% which works out to annual returns of 10.9% per year. This despite the fact that investors had to endure the market getting chopped in half once and falling by a third on three separate occasions. There was a market crash every four years or so, but stocks still provided above average double digit annual gains.

It’s also worth noting that these returns were heavily back-loaded. For the first eight years the S&P was only up 2.7% per year. It was the following twelve year stretch that saw 15.2% annual returns to make the entire period look like a smashing success.

I’m not saying this is what’s going to happen from here. Interest rates are just one variable. You can’t look at the markets in a vacuum to discern what’s going to happen next based on what’s happened in the past. This period started out just after the depths of the Great Depression. While the Great Recession was severe, it’s was nothing compared to what was experienced back then. But there are a few takeaways from this data that I think investors should consider:

This past week I made the comment that true long-term investors root for market crashes or bear markets to buy stocks at lower prices while charlatans root for a crash so they can say they were right. Remember this the next time a bear market hits. Also remember no one know when the next one is coming.