In the hierarchy of difficulty in terms of predicting the outcomes of certain markets, you would be hard-pressed to figure out a harder segment to forecast than currencies. There are trillions of dollars traded every day, the markets are open 24/7 and the variables that impact these movements are nearly endless. The outcomes of market movements based on currency movements, however, are a little clearer. This piece I wrote for Bloomberg looks at the relationship between the markets and the dollar to show how those relationships have looke dover time.

Larry Kudlow, the newly appointed White House economic adviser, has made it clear that he supports a strong dollar. Minutes after his appointment on March 14, he even offered a trade based on his policy ideas: “I would buy King Dollar and I would sell gold.”

History suggests that if Kudlow is able to follow through with his policies to create a stronger dollar, this trade will likely work out for investors. From 1974 through the end of 2017, a Federal Reserve index tracking the dollar has increased in 25 calendar years and fallen in 19 of those annual periods. The average annualized returns for gold when the dollar was up in a given year was minus 1.7 percent. In the years when the dollar index finished down, gold was up an annualized 16.4 percent. So gold does much worse in a rising dollar environment. In fact, the correlation of the prices of gold and the dollar is minus 0.6 since 1974, signaling a strong inverse relationship between the two.

A strong dollar would also likely benefit U.S. stocks but hurt foreign shares held by U.S. investors. Those who own international stocks are subject to currency fluctuations. You’re subject to the fluctuations of the local currency in which you invest when it gets converted into dollars, unless you’re invested in a currency-hedged fund. When the dollar is strong it can hurt your international holdings and when the dollar is weak it can help them.

The performance of the dollar, U.S. stocks and foreign stocks by decade offers a clear picture of this relationship:

You can see a pattern when comparing foreign and U.S. stocks to the dollar’s performance. Stocks outside of the U.S. outperformed in the 1980s and the 2000s when the dollar index fell; they underperformed the U.S. when the dollar rose in the 1990s and so far in this decade.

It’s estimated that almost 45 percent of sales for large-cap corporations come from overseas as many U.S. companies are multinational. So it’s possible that the relationship between U.S. stock market performance and the dollar may not be as clear cut in the future but currency fluctuations will certainly continue to play a role when investors hold assets outside of their home country.

Kudlow also stated that he would like to see the dollar, “a wee bit stronger than it is currently, but stability is the key.” This one could be difficult to pull off. Here is a chart of the dollar index going back to the early-1970s: 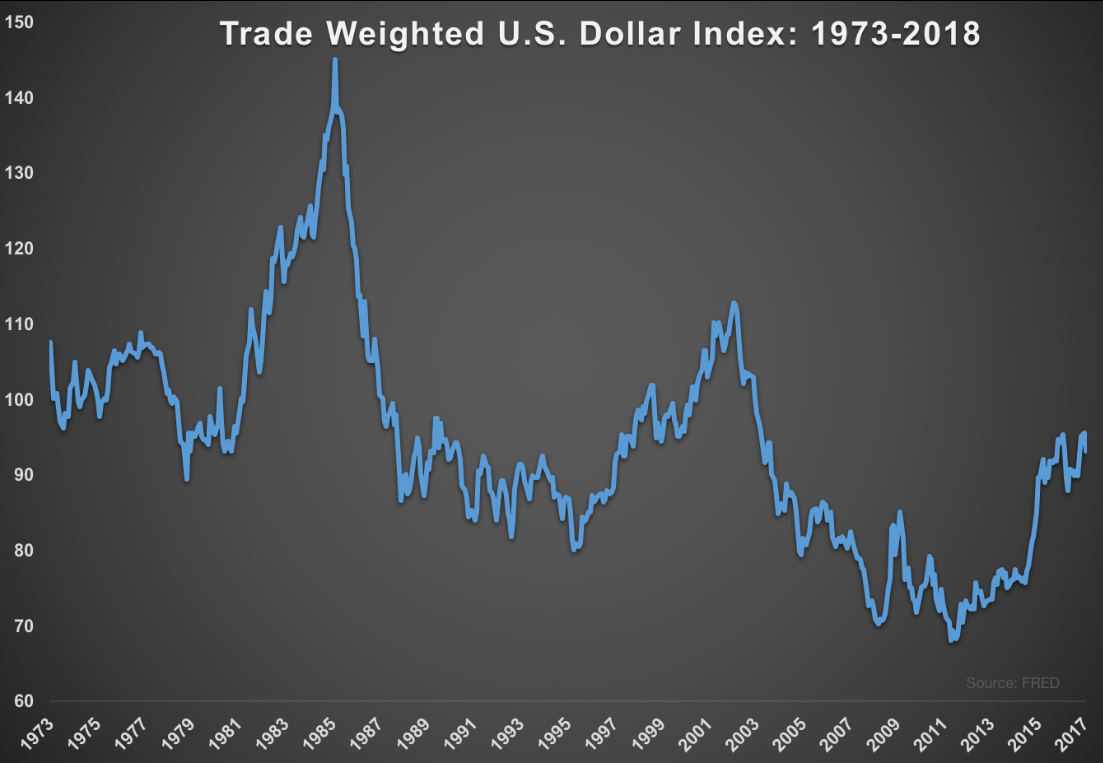 While the dollar has basically gone nowhere from start to finish over this 45-year-plus period, it has been highly volatile. In fact, the volatility of the dollar index is more than 7 percent, which is roughly half that of the stock market. For a data series that doesn’t go up and to the right over time like the stock market, currencies can see wild fluctuations.

The historical investment relationships in a strong dollar regime are pretty clear — gold and foreign stocks tend to underperform. The problem is that it’s not always easy to predict the direction or magnitude of the move in the dollar. Currencies are affected by a large number of variables and don’t always do what politicians or economists would like them to.