We’re finally in a rising interest rate environment (I think) after 10-12 years of predictions that rates had nowhere to go but up.

Price drives narratives in the markets and the direction of interest rates is no different. Anything is possible but no one has a clue where rates are heading.

I can’t predict where things will go next but I can provide some context around interest rates that investors may be missing. Here are three misconceptions about interest rates right now:

The S&P 500’s dividend yield is now lower than the yield on a three month US Treasury Bill.

Gundlach didn’t offer any opinions on this statement but many investors are worried by the fact that short-term bond yields are now giving stock yields a run for their money. History shows that this isn’t too out of the ordinary. Here’s a chart of T-Bill and S&P 500 dividend yields going back to the 1930s:

It is pretty amazing to see short-term interest rates shoot higher as they have in recent years, but it’s not completely out of the question from a historical perspective (although rates being on the floor for so long was fairly rare save for the 1930s). It’s basically been a push in terms of which one had the higher yield — T-Bill yields were higher half the time while dividend yields were higher the other half.

Over the long-term, stocks obviously perform better than short-term government treasury bills. It is interesting to note, however, that stock market returns are lower, on average, when T-Bill yields are rising. I looked at the monthly S&P 500 returns when T-Bills were higher or lower than the previous month. The annualized returns were 10.3% when rates were falling and 8.4% when rates were rising.

So although the stock market tends to hold up during periods of rising rates, it looks like stocks would prefer to see rates falling, all else equal. Still, this doesn’t mean stocks will automatically get crushed simply because yields are more competitive on the short end of the curve. Asset allocation decisions are far more nuanced than that.

Misconception #2. Things were easier for investors when nominal interest rates were higher. It would be nice to be able to invest all of your money in treasuries or bank CDs and live off the interest income but that’s not realistic at current levels. Higher interest rates didn’t always make things any easier in the past, though. This chart from JP Morgan does a nice job showing the difference between real and nominal rates over time: 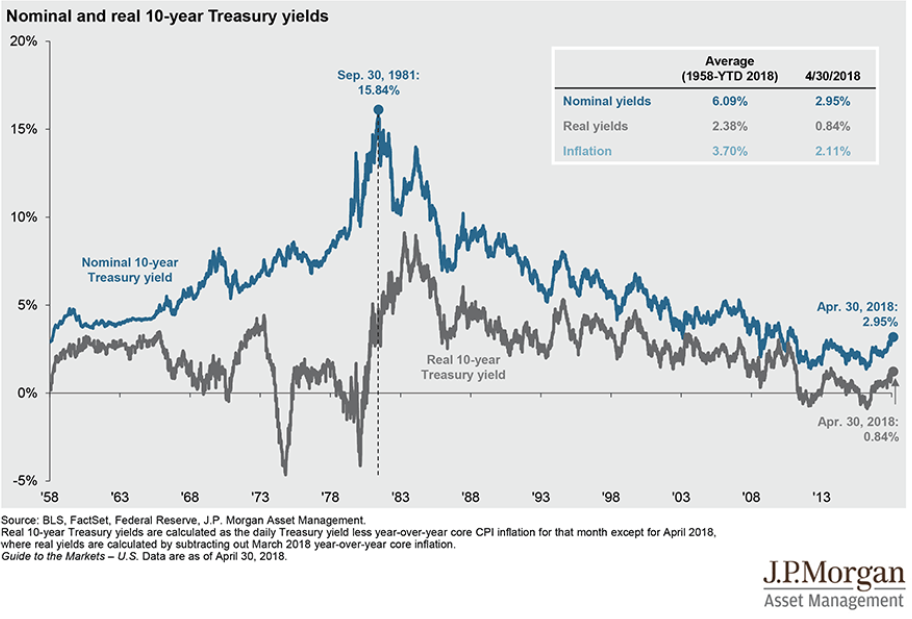 Real rates are much lower than the long-term average but investors should be careful what they wish for when thinking about much higher interest rates. People investing in the late-1970s and early-1980s may have been able to earn double-digit yields on their savings accounts or bonds, but after taxes and inflation, they almost certainly lost money.

There’s a reason rates were rising so fast in that period — inflation was out of control. Real rates were kinder to investors in the disinflationary late-80s and 1990s but higher rates can actually work against you when the reason for it is rising inflation.

Misconception #3. Rising mortgage rates spell doom for the housing market. It’s not just short-to-intermediate-term bond yields that are rising these days. The 30 year fixed mortgage rate has gone from a low of around 3.3% in 2012 to 4.5% or so today depending on where you look. The worry is that higher mortgage rates and thus higher mortgage payments will curtail housing demand and hurt housing prices.

That’s always possible but there are so many variables that drive housing demand — demographics, mobility for employment, income levels, family circumstances, and maybe most importantly, emotions. It’s hard to quantify or single out one variable but looking at the history of both housing prices and mortgage rates would make it appear that homeowners aren’t making their decisions based strictly on interest rate levels.

Here’s a look at real housing prices and mortgage rates going back to 1975: 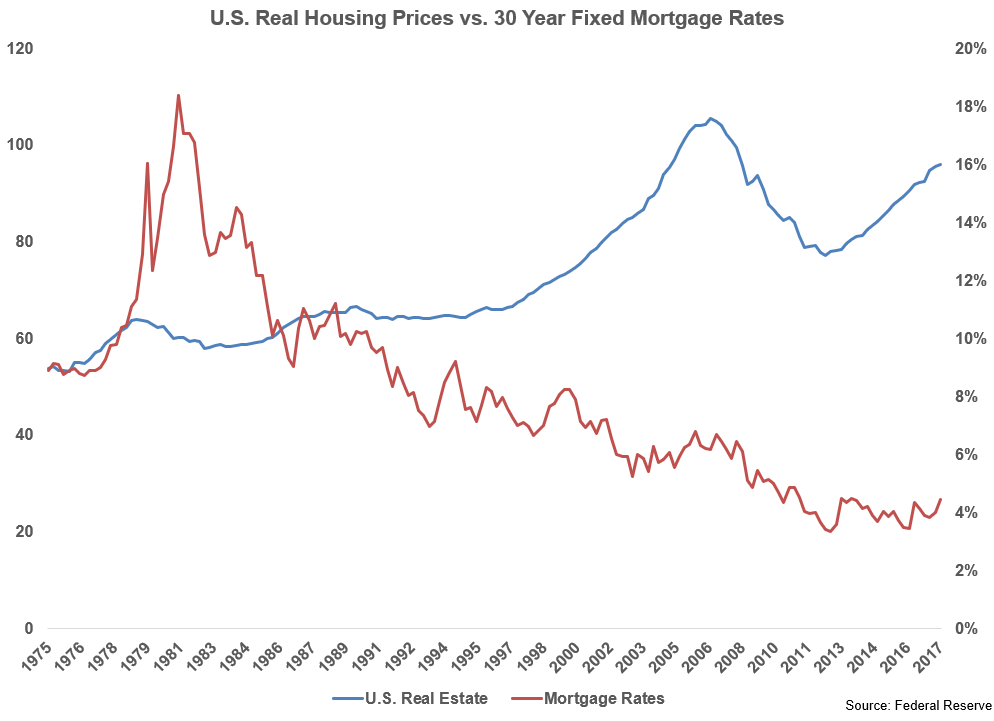 It’s difficult to use correlation data since rates have been falling for so long while housing prices have mostly been on the rise but we can look at different periods of house price appreciation/depreciation to see what was happening to mortgage rates on more of an intermediate time horizon: 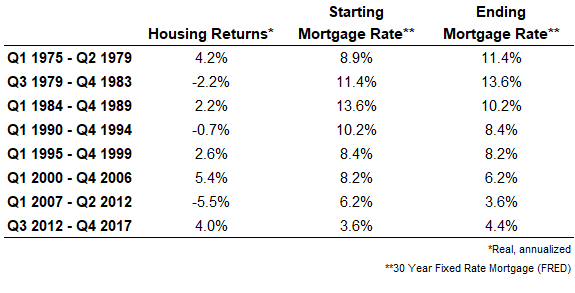 This data doesn’t show much of a stable relationship between mortgage rates and real house prices.

There have been times when rates were rising but so was housing (in the late-1970s and the most recent period).

There have been times when rates were rising and housing prices fell (in the early-1980s).

There have been times when rates were falling in concert with home prices (in the early-1990s and throughout the most recent real estate bust).

And there have been times when rates were falling and home prices did well (in the latter part of the-1980s and the real estate boom of the 2000s).

The point here is you can’t predict housing prices using single variable analysis. There are far too many moving pieces and I honestly doubt that the vast majority of homeowners really care about 50-100 basis points in interest costs when looking to put a roof over their head.

Crowd psychology can take hold of real estate like any other market. And like other markets, most of the participants don’t care what finance theory tells them about what should happen to prices.

Further Reading:
Inflation is a Bigger Threat to Stocks Than Rising Rates