There are many definitions and rules of thumb in the finance world. Most are arbitrary since the markets are more art than science. People often throw around terms without providing justification or context. “Bond bear markets” seem to fall under this category. In this piece I wrote for Bloomberg I discuss why a bond bear market is an entirely different animal than a stock bear market  and why there really is no workable definition.

The almost 1 percentage point increase in U.S. Treasury yields save for the 30-year bond is leading many investors to declare the end of the bull market in fixed-income assets and the start of a bear market. In recent weeks, Bridgewater’s Ray Dalio has said that bonds are already in bear territory. “A 1 percent rise in bond yields will produce the largest bear market in bonds that we have seen since 1980 to 1981,” he said.

But how do we know Dalio is right? The trouble with his statement is that there is no agreed-upon definition of a bear market in bonds. The standard description in stocks is a peak-to-trough drawdown of 20 percent or worse. Because U.S. government bonds are fixed-income securities, it would be very rare for them to fall by that much.

So, a bear market in bonds is much different from a bear market in stocks. The following chart shows the drawdowns in both the five-year Treasury bond and the long-term Treasury bond.1 The biggest losses for both long- and intermediate-term bonds occurred in the 1980-81 period that Dalio mentioned. The maximum drawdown for long-term bonds was just shy of 21 percent, while the five-year note fell 8.9 percent in that time. This was the only period with losses in excess of 20 percent for long bonds. The only time frame that came close was from 1969 to 1970, when long-term Treasuries fell about 19 percent. Five-year bonds have not had a double-digit decline in this period. 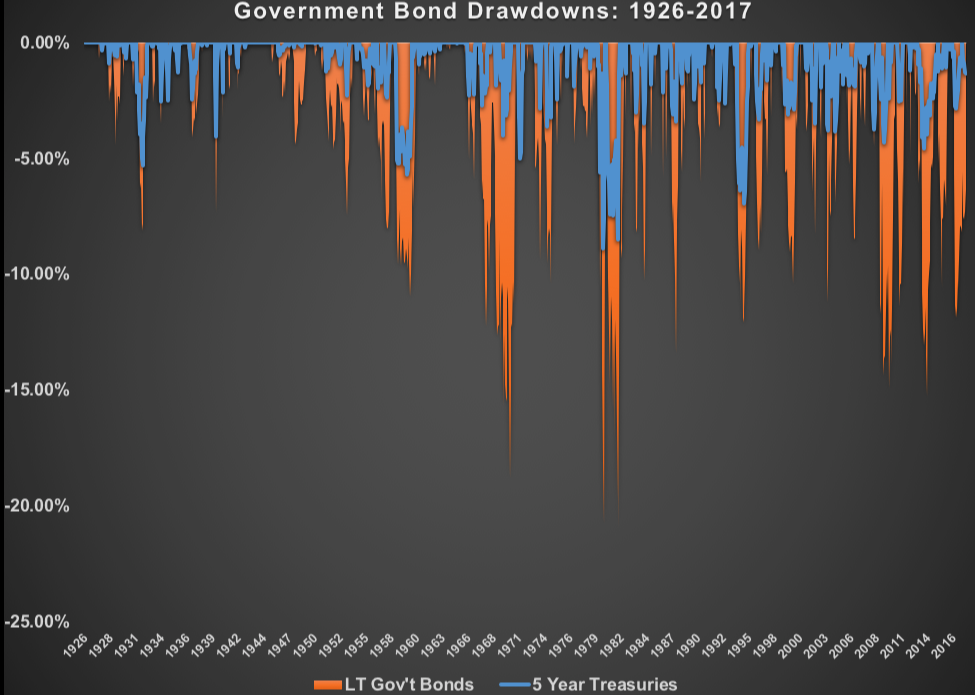 However, the real risk in bonds isn’t nominal drawdowns or losses in the principal value. It is the loss of purchasing power over the long-term due to the effects of inflation. Below is the same chart as above, except this time with inflation-adjusted or real returns on five-year Treasuries and long-term bonds: 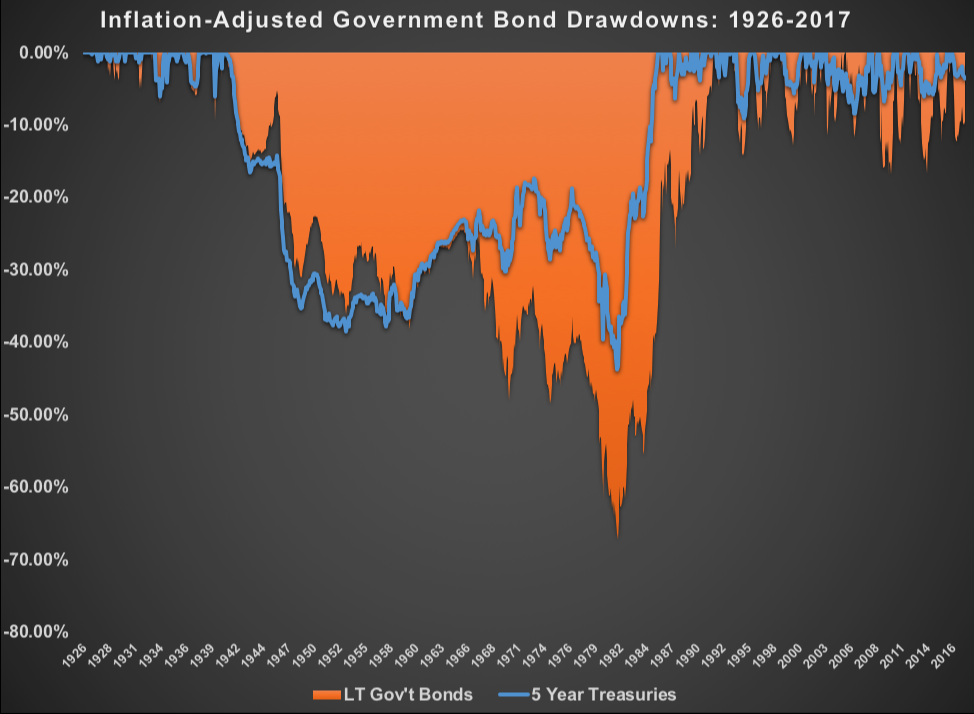 This shows some huge losses. In fact, long-term government bonds lost 60 percent of their value after inflation in a drawdown that lasted almost 50 years. Even five-year bonds were down more than 40 percent in real terms.

During this period, long-term bond yields rose from around 2.3 percent in 1940 to more than 17 percent by the 1981 peak in rates. So while these bonds earned a small nominal return of 2.4 percent per year in this extreme rising rate environment, inflation was almost 5 percent a year, which crushed bonds in this time on a real basis.

The drawdowns in bonds over the past few decades haven’t been nearly as severe. This is what the performance looks like since rates bottomed on the various bond maturity exchange-traded funds:

If we assume that a 10 percent loss in long-term bonds and a 5 percent loss in intermediate-term bonds constitute a bear market, then it looks like Treasuries with maturities of 20 or more years and seven to 10 years fit the bill.

Eventually, higher bond yields will be a positive for investors because expected returns will be higher. But how and why we get to those higher yields will dictate the experience of bond investors in the meantime. All else equal, changes in interest rates have a greater impact on the volatility of bond returns at lower interest-rate levels than they do at higher levels. This is because the duration of bond holdings actually increases at lower rates, even at the same maturity level, because there is no higher income to fall back on.

Higher interest rates will likely lead to some losses in the short term, but eventually, investors will be rewarded with higher yields. Beyond increased volatility, the biggest risk to bond investors is the threat of rising inflation. It has been subdued throughout the economic recovery since 2009. If it does pick up, and the signs are there that it is doing so, this is a much bigger risk to bond investors than rising interest rates.