Home country bias is when investors have the tendency to invest mostly in their own domestic markets. A simple reason for this is familiarity (and in many countries a lack of opportunity to invest elsewhere). But many investors who have a home country bias don’t understand how the different regions of the world differ in terms of their market structure and composition. In this piece I wrote for Bloomberg I use South Korea as an example to show how the make-up of certain markets can impact their performance and why this matters for ETF investors.

President Donald Trump’s visit this week was a reminder of the risk faced by South Korea from its northern neighbor. You would think the mounting tensions would send South Korean stocks crashing. That hasn’t been the case.

In fact, South Korea is one of the strongest-performing world stock markets this year, with the iShares MSCI South Korea ETF, known as EWY, up almost 43 percent. And that’s after losses in three out of the previous six years.

Markets have a history of ignoring or brushing off geopolitical events, but that doesn’t explain South Korea’s strong performance. The major reason the ETF is so much higher this year is that Samsung Electronics is up, too.

Samsung has risen around 55 percent for 2017 and this holding accounts for more than 25 percent of EWY. When this fund fell 13 percent in 2015, a big reason was that Samsung was down 7 percent. The top 10 holdings in this ETF account for almost half of the fund’s market cap, while technology makes up more than 40 percent of the sector exposure.

South Korea is not alone among countries with concentrated holdings in their stock markets. Here’s a list of other country stock market ETFs, along with the weightings of the top 10 holdings: 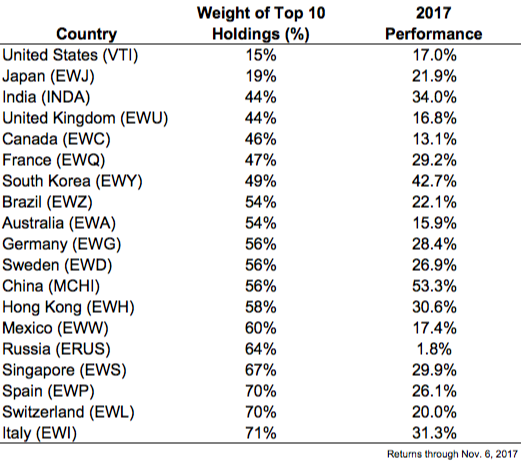 The U.S.  and Japan are really the only two markets that aren’t dominated by a handful of companies. What’s striking about these statistics is not only that these countries have concentrated holdings but that those holdings are often in very few sectors. For example, the Canadian ETF has 64 percent of its holdings in just two sectors (financials and energy). It’s even worse in Russia, where 71 percent of stocks are in financials and energy. China has 64 percent in technology and financials.

In some ways, many of these country ETFs are more similar to S&P 500 sector funds than to the overall U.S. stock market. This table shows the concentration of holdings in each of the S&P 500 sectors: 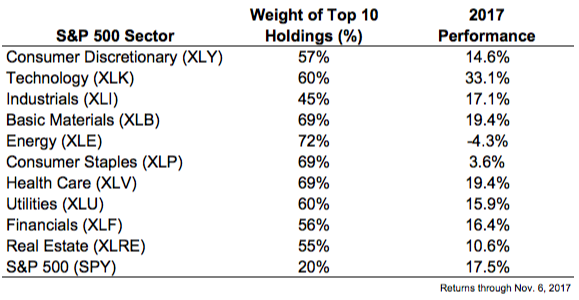 The weightings of the top 10 holdings in these sectors are fairly similar to the majority of the country ETFs listed above. The U.S. stock market makes up roughly 50 percent of the world market capitalization. One of the bigger reasons is that the U.S. economy is much more dynamic and diversified than the rest of the globe’s. The concentration of holdings in each country’s stock market bears this out.

A few weeks ago, Franklin Templeton Investments rolled out a suite of 16 single country ETFs for an expense ratio of just 9 basis points for developed nations and 19 basis points for emerging markets, undercutting much of the competition in the area. The fee wars among asset managers have been great for investors. ETFs are one of the best product innovations from the asset management industry over the past few decades. They’re low cost, tax efficient, convenient, transparent, liquid and diversified. But investors have to be careful to understand exactly how diversified their individual funds really are.

I’m not saying concentrated funds are necessarily bad, but investors have to know what they own and why they own it. Not all ETF funds or strategies are created equally. ETFs run the gamut from broad market capitalization index funds to more specialty strategies. There are no right or wrong answers when selecting an ETF but it’s wise for investors to understand what they’re getting themselves into before making investment decisions.

Before selecting an ETF, investors must be aware of their exposure by checking out the top holdings and figuring out how concentrated they are. This can help investors understand the risk characteristics of the fund as well as the volatility profile. You also have to review how the index or strategy is constructed, the typical volume traded on a daily basis, the liquidity profile of the underlying holdings, and how the fund differs from a plain vanilla index ETF.

The proliferation of ETFs will only increase in the coming years. The paradox of choice here is that it’s only going to get harder for investors to pick and choose the funds that work for their situation. This is why you need to have a selection process.