Since I wrote this piece for Bloomberg in late-October there has been an additional 14 new all-time highs in the S&P 500. I’m often asked why the market continues to trudge higher in the face of so much uncertainty in the world. The simplest explanation is this idea of momentum. Momentum is by far the best performing academic risk factor in the markets historically, but it’s not always so easy to take advantage of and most investors don’t understand what it actually is. This piece takes a deep dive into what the momentum factor is and details some of the struggles the fund world has had in capturing its risk premium.

The S&P 500 has reached almost 50 all-time highs in 2017. Since the start of September alone there have been almost 20 such peaks, which is more than the total number in the entire decade of the 2000s. 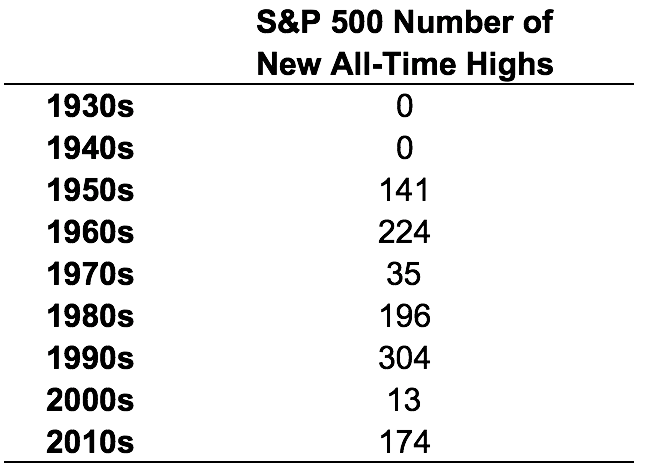 The data in the table show that new highs tend to cluster and that there were decades that had very few of them. There are many potential reasons for these numbers, but the simplest answer is the concept of momentum. Sir Isaac Newton’s (1) first law of motion stated that an object at rest stays at rest while an object in motion stays in motion unless acted upon. The corollary to the markets is that rising prices tend to attract buyers while falling prices tend to attract sellers.

There are a number of behavioral biases that could explain the momentum phenomenon. The recency bias holds that people extrapolate the recent past into the future indefinitely. Anchoring to past price points causes investors to initially underreact to new data, events or company information. That turns into an overreaction once it becomes apparent in the price as the herd mentality kicks in. Overconfidence and the confirmation bias can also cause investors to pile into winning investments after they’ve risen and sell out of stocks after they’ve fallen. Price momentum is the simplest idea as to why both bull and bear markets can go further than fundamentals would dictate.

Momentum can also be used to explain the performance of individual investments or securities. As a quantitative risk factor, momentum is the idea that stocks that have performed well (or poorly) recently will continue to perform well (or poorly). The momentum factor utilized by academics and quants typically looks at the previous three, six or 12-month performance and buys the securities that have performed the best, based on different thresholds and rules.

Eugene Fama, the father of the efficient-market hypothesis, said: “The premier market anomaly is momentum. Stocks with low returns over the past year tend to have low returns for the next few months, and stocks with high past returns tend to have high future returns.”

A recent paper from Research Affiliates, “Can Momentum be Saved?“ calls into question how well this historical outperformance translates into real-world fund performance. Research Affiliates looked at every U.S. mutual fund with “momentum” in its name and discovered that none has outperformed its benchmark since inception after accounting for fees and expenses. Their findings are fairly damning to the translation of momentum in actual mutual funds:

No U.S.-benchmarked mutual fund with “momentum” in its name has cumulatively outperformed its benchmark since inception, net of fees and expenses. Worse, because the standard momentum factor gave up so much ground in the last momentum crash of 2008–2009, it remains underwater in the United States, not only compared to its 2007 peak, but even relative to its 1999 performance peak. This means 18 years with no alpha, before subtracting trading costs and fees!

To be fair, the study relied on relatively small sample size, and many of these funds haven’t been around very long. With the rise of smart beta funds and low-cost quantitative investment strategies, I expect investors will have better options than they’ve had in the past. Momentum still has a long way to go to catch on with investors like other factor strategies have. (2)

Hedge funds have also had a difficult time with momentum investing in this cycle. Commodity trading advisers use a trend-following approach by going long or short up- or down-trending securities in stocks, bonds, commodities and currencies to take advantage of momentum in several different assets. According to data from BarclayHedge, as a group these funds now have negative returns in seven out of the past nine years after showing some of the best performance of any asset class during the 2008 market crash.

One of the biggest issues with momentum investing is that it requires a high amount of turnover as the best-performing assets tend to change rapidly over any of the standard lookback periods. It’s also true that for any investment strategy to “work” (3) it must go through extended periods of time when it doesn’t. If these premiums always outperformed there would be so much capital invested in them that they would become so crowded that they would lose their advantages.

This is why most investors will have a much smoother ride by incorporating a momentum strategy as a piece of a broader diversified portfolio. In “Your Complete Guide to Factor-Based Investing,” Larry Swedroe and Andrew Berkin show that a diversified portfolio of different risk factors — including value stocks, small caps, momentum stocks and high-quality stocks — had a higher probability of outperforming over 10- and 20-year periods when combined as an equal-weight portfolio than each factor had individually.

(1) It’s worth noting that Newton, perhaps the smartest person to walk this planet, lost a fortune in the South Sea Bubble in the 1700s. His famous quote was that he, “could calculate the motions of the heavenly bodies, but not the madness of the people.”

(3) Any sane investor would define “work” in this context as having a high probability of outperforming over the long-term.