In the fall of 2007, an analyst named Meredith Whitney from a second-tier Wall Street firm would make a name for herself in the world of finance when she predicted that Citigroup was so undercapitalized and mismanaged that it would surely be forced to cut its dividend.

Whitney was immediately slammed by many of her peers, but she turned out to be right. It’s easy to look back now and see how obvious this was but at the time it was far from clear as the financial crisis was just getting underway. While Citigroup did slash its dividend two weeks later, the payout on the stock would have much further to fall before all was said and done. By the summer of 2008, Citigroup sported a hefty 10 percent dividend yield after the shares had plunged more than 60 percent from their peak.

Value conscious investors looked at the stock and salivated. With such a huge loss in market capitalization and high dividend yield, surely investors would be paid to wait, right? Unfortunately, that wasn’t the case. Citigroup would go on to lose a further 94 percent of its value from those levels and the dividend was cut 99 percent. Bank of America was dealt a similar fate. This stock was also yielding 10 percent in the summer of 2008 before its dividend was slashed 98 percent by 2009.

These are extreme cases, but investors can use them as cautionary tales in terms of understanding the difference between finding value in beat-up assets and catching a falling knife. While not necessarily on par with the Great Recession, the retail industry is facing its own crisis now. Physical stores are in decline as we see long-running companies such as Sears, JC Penney, Macy’s and Kmart closing stores across the country. Competition from online retailers such as Amazon and changing preferences in consumer tastes has made for a difficult environment for many retailers.

While Amazon’s stock performance has been out-of-this-world, many of the retailers who are competing with them in certain areas haven’t fared so well. Here are the total returns over the past decade for several retailers who’s turf Amazon has infringed upon: 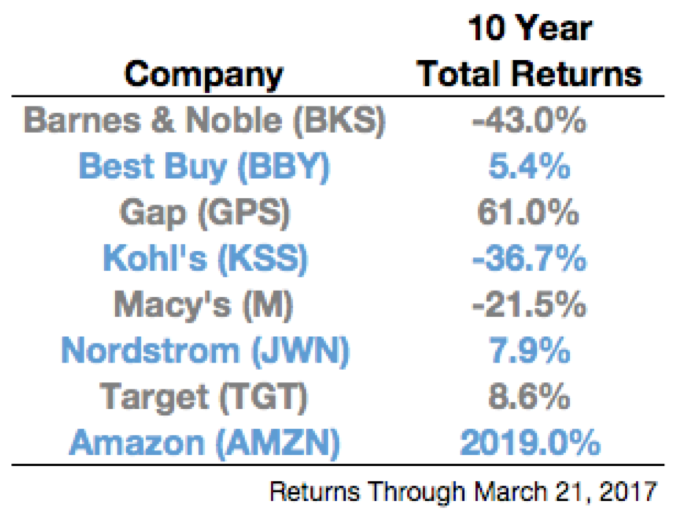 The S&P 500 Index is up over 100 percent in this period, so these name brand stores have struggled to keep up with the overall market as well. The poor returns have had a similar impact on dividend yields for these companies as the lead-up to the financial crisis had on the yields for Citigroup and Bank of America. Here are the current yields for this group of retailers: 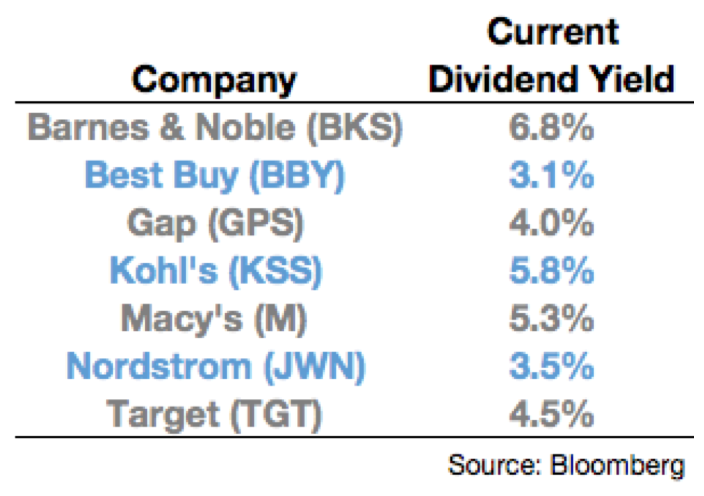 In a world where the benchmark 10-year Treasury note yields just 2.4 percent, these dividends can look pretty appetizing for yield-starved investors. The questions investors must ask themselves are the following:

It would make intuitive sense that these dividends should be in trouble. Amazon founder Jeff Bezos is famous for the tagline “your margin is my opportunity.” So it would make sense that margins will be shrinking for traditional retailers in the years ahead as they try to compete with Amazon and potentially spend more on their online capabilities.

Investors love dividends because it means cold hard cash in their pockets. Company management is often hesitant to cut dividends because it signals to investors that all is not right. Even if there are better uses of those cash flows, plenty of companies will hold off on dividend cuts until they absolutely must, and by then it’s usually too late. 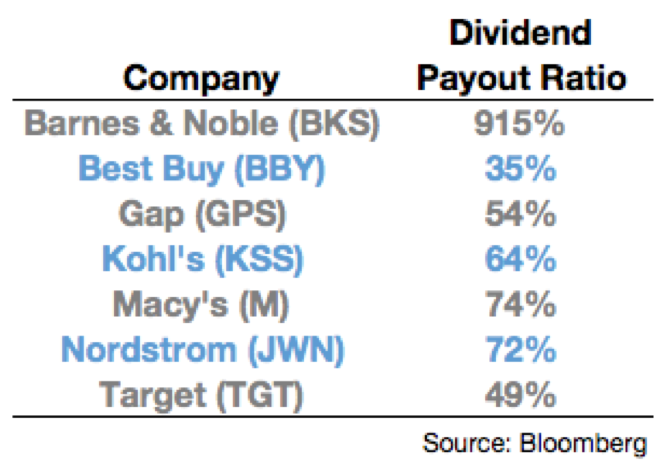 A dividend payout ratio above 50 percent is typically a red flag because it means more than half of earnings are being paid to shareholders and not being reinvested in the business. These companies have returned plenty of money to shareholders in recent years though buybacks as well. Over the past 12 months, Best Buy, Kohl’s, Nordstrom and Target have spent more money on share repurchases than dividends.