A number of people have asked for my thoughts on this blog post from Lightfield Capital about the potential for baby boomers to take down the stock market in the coming years from forced sales during retirement.

Here’s the gist of the argument from this well-reasoned post: a combination of rebalancing from stocks to bonds as people retire or approach retirement age and required minimum distributions from tax-deferred retirement accounts at age 70.5 will cause baby boomers to be huge sellers of stocks in the coming years which bodes ill for stock market returns.

This very well could be true. But allow me to take the other side and offer some possible reasons why the boomers won’t destroy the stock market in the coming years as they retire en masse.

People are woefully unprepared for retirement. You can’t go a week without reading multiple articles about how poor the state of retirement savings are in this country. These people are going to have to take more risk in their investments to make up for it. Whether or not this will work is another question but my guess is lots of investors will be more overweighted in stocks than investors were in the past out of necessity. Add to this the fact that people are living longer and there should be a higher demand for stocks from retirees than in the past.

Household allocations to stocks aren’t that high. Stocks are still relatively low in terms of household asset allocations when you look at the data: 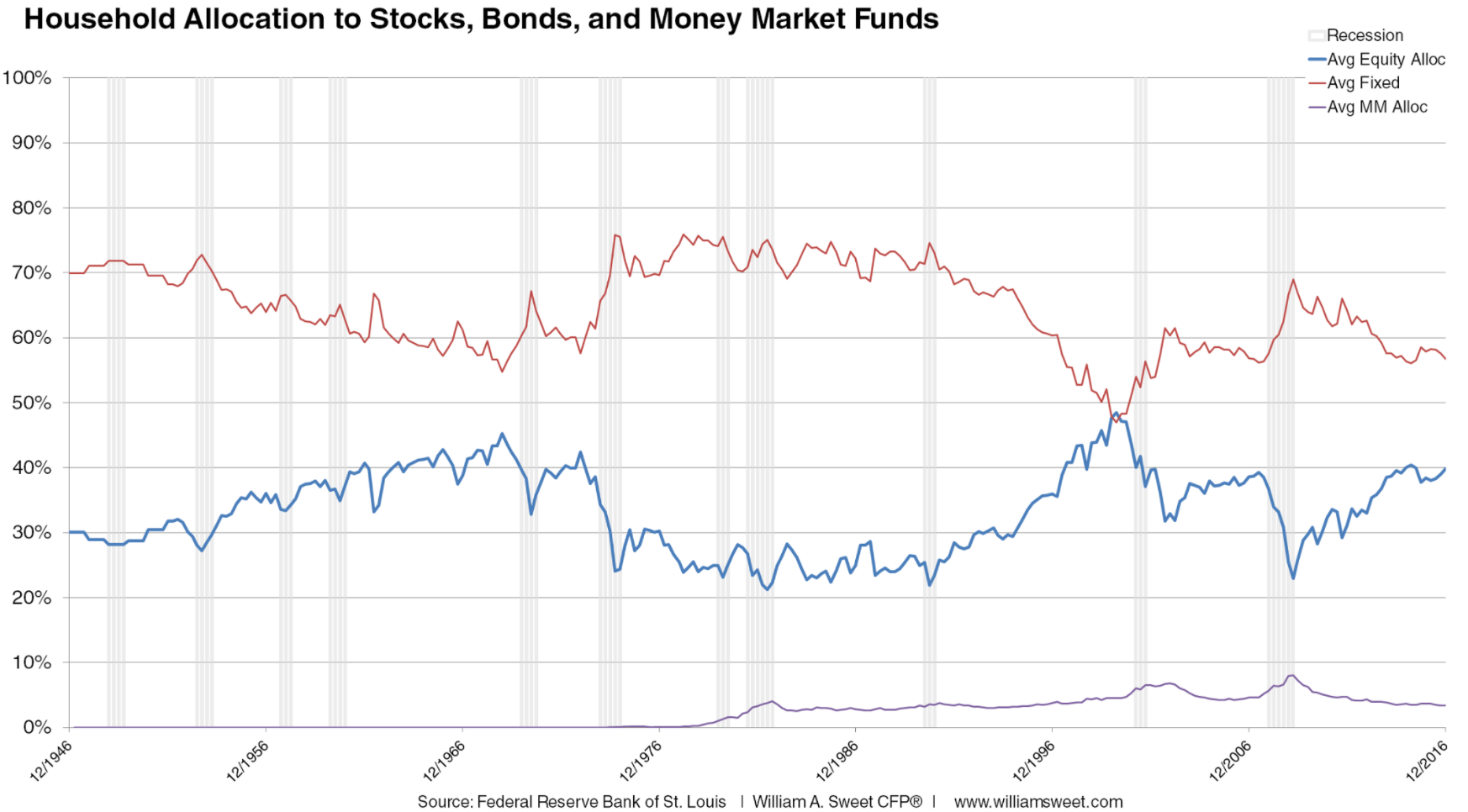 There’s no reason some of these sales won’t be from bonds instead of stocks. Plus I think the allocation to stocks has room to grow from current levels.

Investing has changed dramatically in recent decades. Financial advisors, robo-advisors, ETFs, targetdate retirement funds, and auto enrollment have all made it far easier for investors to broadly diversify their portfolios. In the past, many investors would choose the safety of stable value funds or bond funds in retirement accounts but the new focus on asset allocation means stocks are emphasized more than they were in the past.

RMDs won’t all happen at once. At age 70.5 you are forced to start drawing down your tax-deferred retirement accounts so the government can claim some tax revenue on those investments. But the amounts won’t be huge. Here’s the RMD table from the IRS that shows the minimum percentage of your account you have to take out each year: 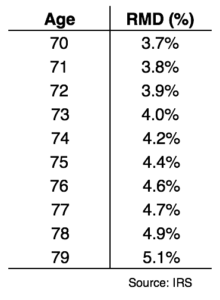 RMDs can be reinvested elsewhere. The government may force you to take money out of those 401ks and IRAs but they don’t dictate what happens with the money next. After taxes are paid on those RMDs, investors can do anything they’d like with that money, including investing it right back into the markets through a taxable account after taking a tax haircut. Or they can give it to their kids to fund their own retirement accounts, help pay for a down payment on a house to get them out of the basement or fund the grandkids’ 529 plan.

There will likely be a huge private-to-public transfer of assets. This is mostly anecdotal from my own experience in dealing with business owners, but there’s a lot of wealth tied up in private businesses owned by boomer entrepreneurs who are gearing up for retirement. Many don’t want to pass the family business down the next generation (or the kids don’t want to take over) so they’re selling out at retirement to get more liquid. Those funds are transferring from private to public markets to get more diversified. 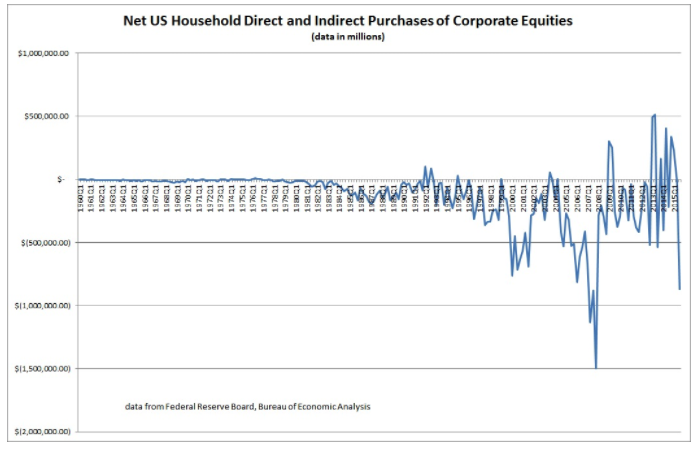 Institutions, corporations, and professional investors have picked up the slack from these household sellers. This wave of selling could get bigger in the years ahead but it’s already been going on for some time now.

Someone has to buy those shares. Just like there’s no such thing as “cash on the sidelines” there has to be someone on the other side of these boomer sales. And it’s not like we’re talking about a closed system of transactions here. Those baby boomers who aren’t reinvesting or passing the money along with their kids will be spending in retirement.

That money will go to corporations — who will be the likely buyer in many instances in this case through buybacks of their own shares. Or they’ll see profit growth from increased spending in the economy.

Millennials will pick up the slack eventually. Some will call me naive but I’m betting on millennials to eventually pick up the slack and buy stocks as well. This demographic is now larger than the baby boomer cohort and once they start reaching their peak earnings years they will be saving and investing more money.

Demographics are widely known. Investors have become more focused on the short run than they once were but it’s not like these demographic trends are a secret. Shouldn’t the market be pricing this in at some point if there’s going to be a wave of selling in the future? And wouldn’t the value of all financial assets — stocks, bonds, real estate, etc. — be expected to drop in this scenario?

Maybe I’m wrong. It’s possible that baby boomers will destroy the stock market as a nice going away present for the next generation. I don’t necessarily buy this argument but anything is possible in the markets. Future returns could be lower with or without selling pressure from this demographic.

But let’s say stocks do crater in the years ahead (and at some point they will whether it’s because of demographics or something else).

If anything, this would be a gift, not a curse for the next generations. It would allow us to invest our savings at lower prices and higher yields. That’s a good thing in the long-run.

Further Reading:
Are Millennials Doomed in a Lower Return Environment?