“One half of your return is determined by your investments, the other half by what kind of person you are.” – John Bogle

Vanguard recently ran a report on the more than 1 million participants invested through their retirement plan to give some broad averages so others can see how they stack up.

Here are the average contributions rates broken out by age group: 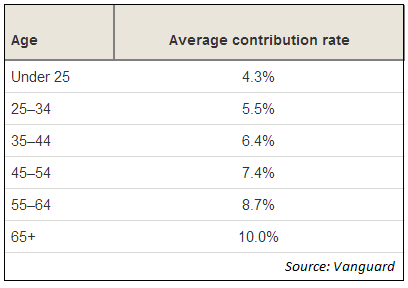 Notice how the percentage of income saved slowly goes up over time. This is because people get more and more worried about their finances later in life when they start approaching retirement age.

In my common sense fantasy world the numbers would be much higher for the three younger groups so they could all benefit from compound interest over many decades instead of just a few.

Instead most people fall into the trap of I’ll start saving when I’m more established and ready.

The next table shows the average retirement balance: 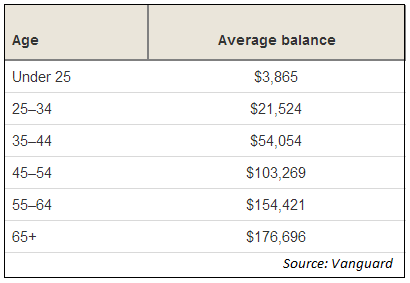 At a 4% withdrawal rate, those in the average 65+ range would be able to take out roughly $7,000 a year or about $590 a month on that balance. This doesn’t include social security or possible pension income, but for most people this will mean either working longer or a reduced lifestyle during retirement.

The average balances on the 65+ accounts show why people get nervous as they get older and thus try to save more as they age.

I’m sure if you asked those with the average balance or less in their retirement accounts what they would do differently with their finances, saving more would be at the top of the list.

Next is the average asset allocation breakdown by age group:

Target-date retirement plans aren’t perfect, but they are much better than most alternatives so it’s nice to see that they make up such a large percentage of the younger demographics.

The other number that stood out to me was the fact that the 65+ group has an average of almost 30% in cash. It definitely makes sense to de-risk as you approach retirement and need to tap your portfolio for spending needs, but investors still have 20-30 years to invest during retirement to try to keep up with inflation.

I’m sure low bond yields aren’t helping matters, but having more than a couple of years’ worth of spending needs in cash is probably a bit excessive.

And finally the worst chart in the entire survey, the amount of people that take out 401(k) loans: 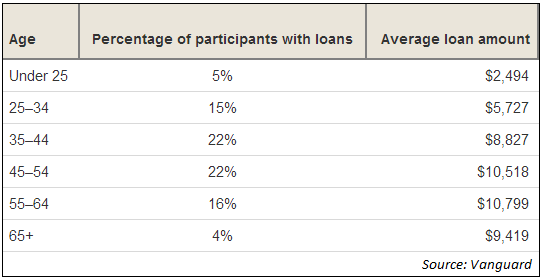 I was fairly shocked that some of these age groups had as many as 1 in 5 people taking loans from their retirement plan.

This is a terrible idea for a number of reasons.

Loan rates are usually around prime plus 1%, so that’s not excessive, but you get dinged in a number of other ways.

Interest payments get taxed twice because they were made with after-tax dollars and you must pay taxes again when you retire and take distributions. And you pay back the loans with after-tax money.

Some plan providers charge a one-time fee on the loans as well.

If you leave your job or get canned you usually have around 60-90 days to pay back the loan, which can put people in a bind if things go wrong.

But the biggest reason is that you miss out on potential market gains and the benefits of compound interest.

It’s hard enough for people to save and invest these days. Trying to pay back a loan on your savings only compounds the problem.

Even if you are doing better than these averages, it’s not necessarily time to get complacent. The average retirement statistics are fairly terrible in most cases. It’s easy to be above average.

Make sure that you are saving enough to achieve your goals and avoid costly mistakes that can make it more difficult to reach financial independence.

Source:
How do you compare with other investors your age? (Vanguard)