The CAPE ratio is a valuation measure that gets a lot of publicity from the financial media (mainly because of its namesake, Robert Shiller). There’s been a lot of ink spilled on how effective it is as a market metric. My stance is that it’s far from a perfect valuation measure but there are no perfect variables when dealing with the markets. With those caveats out of the way, here’s a recent piece I wrote for Bloomberg on current levels in this highly debated valuation ratio.

Something happened in the stock market this week that has only occurred twice since 1871: Robert Shiller’s favorite valuation method for the S&P 500, the cyclically adjusted price-to-earnings ratio, reached 30. So, is it time to worry? 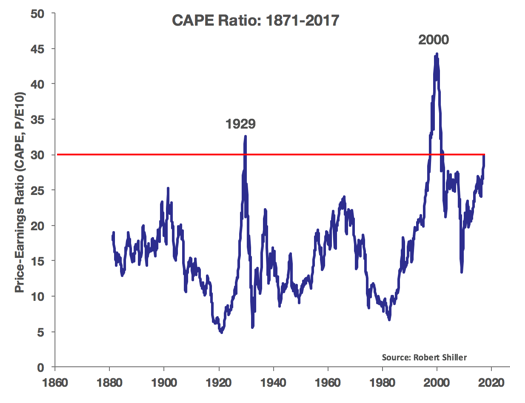 Let’s start with the bad news. The two times the CAPE ratio reached these levels, doom followed in the stock market. In 1929, it only stayed above 30 for about two months until Black Tuesday sparked a crash that sent stocks tumbling more than 80 percent from their peak. It happened again in mid-1997, but stocks and valuations continued to rise. The ratio eventually rose above 44 in late-1999 and stocks ran up almost 85 percent before eventually losing half their value by 2002 after the technology bubble burst.

Here’s the good news: the data set we’re dealing has a sample size of just two previous occasions. That is far too few to draw conclusions about what is going to happen this time around.

The question is, what can investors do with the knowledge that valuations are far above historical averages? First, you can rein in your expectations for returns over the next decade or so. Since early March of 2009, the S&P 500 has returned close to 20 percent per year. Those types of returns were seen in the 1980s and 1990s, but investors can’t reasonably expect double the long-term average of returns to continue indefinitely, especially with current levels of interest rates, dividend yields and stock multiples. Expected returns aren’t set in stone, but you can assume below average long-term returns to come from above-average valuations in most instances. In 2017 the S&P 500 is off to another strong start, up over 7 percent just two months into the year, so the timing on these expectations has to be flexible.

Higher valuations can also be instructive in terms of what could happen if stocks do fall from these lofty levels. Researchers at Star Capital looked at a number of different valuation metrics on stock markets around the world going back to 1979 to see how starting values affected subsequent drawdowns. Here are their findings:

This data show that cheap valuations (on the left) have seen relatively minor average losses in stocks during this period, while expensive valuations (on the right) have led to much to much larger drawdowns, on average. So although no one has any idea how long valuations can continue to stay elevated, once stocks do fall there is a good chance that the drop will be a painful one, as downside risk tends to increase as market valuations become excessive.

As with all market indicators, the CAPE ratio requires some context and caveats apply when discussing its use in making investment decisions, especially considering this data goes all the way back to the late 1800s. Every cycle is different in terms of interest rates, inflation and what type of economic environment we’re in. The U.S. economy and markets are more mature than they once were, and it’s a much wealthier country. Industry make-up and the types of corporations are completely different. The Federal Reserve didn’t exist for the first part of this dataset. Accounting standards have changed, costs to trade have come down, the markets are more liquid, and there are far more investors these days.

Having said all that, it would be hard to argue that the stock market is trading cheap at current levels following enormous multiple expansion and returns for some time now. Valuations alone can’t force the market to crash and mean reversion doesn’t run on a schedule, but investors need to be aware of the potential risks in the market from current levels.

You can’t use valuations to precisely predict future returns or the timing of market crashes, so it’s best that investors reset their expectations and understand that eventually risk will rear its ugly head.