The following is another piece I wrote for Bloomberg with some thoughts on what, if anything, the president means for stock market performance or risk.

Plenty of ink has been spilled by pundits, economists, portfolio managers, strategists and the financial media about what President Donald Trump’s economic plans, cabinet selections, trade talk, fiscal policy and other ideas will mean for the markets. Some see the Trump rally since early November as a sign that investors believe his policies will be market-friendly for the next four years. Others see the surge — part of the eight-year long bull market — as little more than a sugar high and predict Trump is likely to crash the markets through policy mistakes or a poorly worded tweet.

Yet it would be pure speculation at this point to forecast whether Trump will cause a boom or a bust in the stock market. Either is always a possibility, but in the stock market, risk is typically much easier to predict than returns. Returns are promised to no one, but risk is ever-present.

And risk does not discriminate based on who the president happens to be. I took a look back at every president since Herbert Hoover to see how bad stock market losses have been for each four-year term in office. The following table shows the worst drawdown on the S&P 500 for each term going back to the late 1920s: 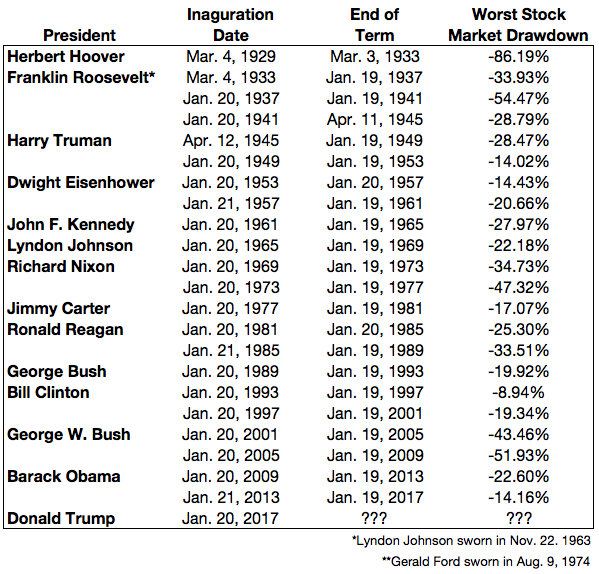 Presidents have far less control over the markets than most people would have you believe. There are no magical levers they can pull to force stocks to rise or fall. Policy decisions often affect the economy with a lag. And the economy and stock market are rarely operating in lock-step.

In addition, it really depends on where we are in the cycle when presidents come into office. The metrics are almost always different, depending on the starting date in office, for interest rates, market valuations, inflation, unemployment, demographics, economic growth and the length of the current expansion or contraction in the economy. Also, the president has no control over monetary policy. The Federal Reserve likely has more to do with economic success or failure than the president.

The majority of the historic economic and stock market records for presidents has more to do with the luck of the draw than anything else. Bill Clinton and Ronald Reagan both took over at opportune times. George W. Bush and Franklin D. Roosevelt weren’t so lucky.

Yes, presidents probably have the ability to make things marginally better or worse when it comes to the markets. After all, sentiment plays a huge role with investor preferences, so it’s possible a president can awaken animal spirits to get people excited about prospects for the future. Yet the highest office in the land tends to get far too much credit when things go right and too much blame when things go wrong.

Even under the best case scenario — in which a new president is able to seamlessly thread the needle with his actions and policies — we will are likely to have a bear market or severe correction in the markets at some point during his presidency. And the worst case scenario? We will likely see a prolonged market crash.

Either way, investors should prepare for the possibility of large losses in the stock market in the next four years. Regardless of who is in the Oval Office, that’s just how the stock market functions.