Life is never quite so cut and dry as simple rules of thumb, but this probably isn’t a bad starting point. The problem many people face when trying to get their personal finances in order is that they focus on trying to cut back on the 30% category and ignore the importance of the 50% category. The big purchases in your 50% spending category can have a huge impact on your finances because, for the most part, they’re fixed expenses. You have to pay them on a regular basis and they are more or less set in stone. That means getting them right up front can have a huge impact on your bottom line.

For example, the average cost of a new car in the U.S. is around $34,000. Assuming a 5% interest rate on a 60-month loan term, that’s almost $650/month for your car payment and that’s before considering the cost of insurance, registration, gas, maintenance, etc. The total cost could end up being $1,000/month or so all-in. If you can afford it and are safely putting away money for your retirement and your kids’ college savings fund, that’s great. I’m just guessing most people driving around in brand new cars aren’t always in great shape financially.

But the biggest chunk of your spending will typically go towards housing. And how much you spend on housing has as much to do with where you live than anything. Zillow recently released data on a number of different housing markets across the country and calculated what the mortgage burden (% of income spent) on housing looks like depending on the specific city or metropolitan area: 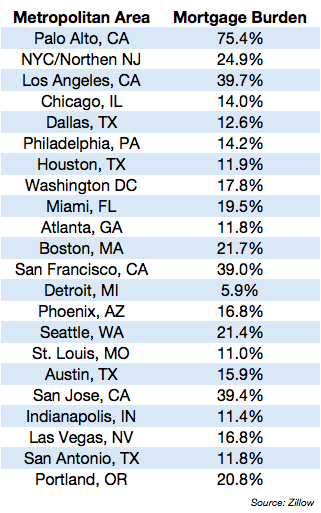 The highest ratio by far was Palo Alto, CA, which makes sense given so many people are trying to move to Silicon Valley for technology jobs. But the average ratio of income spent there on housing is surreal. I don’t understand how anyone — beyond tech millionaires, billionaires, and the Golden State Warriors — can afford to live there. In fact, the majority of the highest mortgage burdens reside in California. I get it. The weather, the ocean and the lifestyle make it a tough place to beat but this can put a huge strain on the family budget.

There are a number of larger cities that see housing costs over 20% of income. On the other end of the spectrum is Detroit, where the average mortgage burden is less than 6%.

The obvious conclusion here is that it’s much more expensive to live in a large metro area. Smaller cities such as St. Louis, Atlanta, Indianapolis and San Antonio are much more affordable than LA, NYC, Seattle or San Francisco. Maybe those places aren’t quite as exciting but life is always a series of trade-offs.

The usual caveats apply here. Everyone’s personal finances are personal. Most of the time where we end up living is based on where we were born, where we would like to work, luck or a bad break. Higher incomes can offset a lot of the higher cost of living in a large city, but that really depends on your line of work. You could also save money living in a big city by cutting down on transportation expenses by not having a car. Also, many people get around the housing issue in big cities by renting or sharing space with roommates.

I’m not trying to judge people on how much they spend on their house and car or where they live. Finances aren’t everything in life but if you’re struggling to get ahead financially it makes sense to consider the cost of living where you decide to put down roots.

Source:
Pockets of Affordable Housing Exist Within the Most Expensive Market (Zillow)