As I pointed out earlier this week on Twitter, this Goldman Sachs online savings account now pays a higher interest rate than the 10 year government bond yields in Japan, Germany, France, Belgium, Switzerland, The Netherlands and Sweden:

(Side note: There are a number of these online savings accounts, so it’s not just Goldman that offers this kind of deal. Online savings accounts are typically able to pay a much higher rate than the brick and mortar banks because they don’t have physical branches or as much overhead to pay for.)

The 10 Year Treasury yields just shy of 2% at the moment, so needless to say, investing in high quality fixed income land isn’t such a lucrative opportunity set right now.

Extremely low interest rates are something of a double whammy of bad news for bond investors. Not only does it mean that returns will be lower than they were in the past, but investors should also prepare for an increase in the volatility of bond prices. BlackRock had a nice piece on their blog last week detailing this issue. Here’s a graph they used to show the decrease in rates has led to an increase in bond duration on a handful of developed country sovereign bond markets: 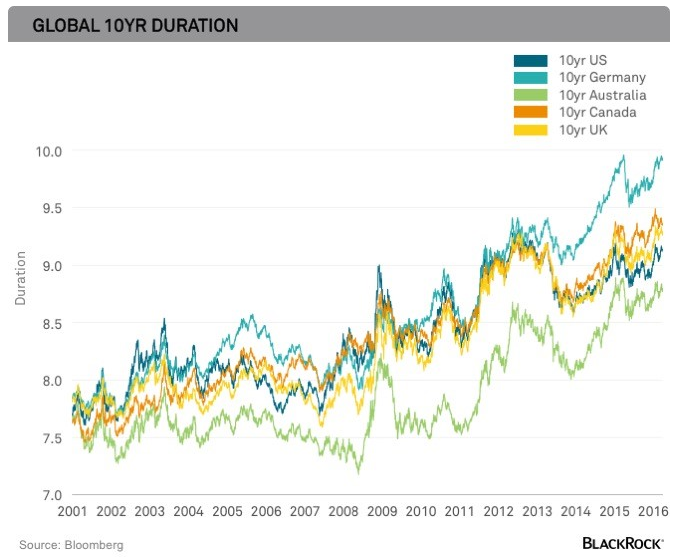 Lower yields give investors a much smaller cushion when rates change. The same magnitude of an interest rate move will have a much larger effect on the price of these bonds, all else equal, than it would have at higher yields. So there will be much higher volatility at lower interest rates, thus a lower margin for error.

What’s an investor to do in this low rate world?

Further Reading:
The Most Interesting Asset Class Over the Next Decade