After a number of years of poor performance Brazil’s stock market is on fire this year. Year to date, the Brazil ETF (EWZ) is up over 20%. Since the third week in January it’s up 44%. This is a massive move in a very short amount of time.

Here are some of the other big movers in the past couple of months:

Sure, it’s fun to dream but thinking that you can consistently own what’s working right now all the time is a huge source of investor errors in the markets. There’s always going to be a market, industry, sub-sector or security that’s either screaming higher or crashing. That’s the nature of the markets. It would be silly to assume that you could always be involved in the ones that are bottoming and just about to take off. No one is that good.

Investors and pundits alike love to quote investments in terms of gains or losses from the highs or low, but only a tiny, tiny fraction of investors are actually placing trades at tops or bottoms. Most invest somewhere in the middle or just after a big move in either direction.

Everything looks much easier in hindsight so it’s worth putting these gains into perspective. Even with the recent rallies these markets are all still down huge from their peaks:

The huge moves off the lows in each of these markets very well could be the proverbial dead cat bounce. Anything commodities-related has been performing terribly for a number of years now and was due for a face-ripping rally.

On the other hand, new bull markets tend to come out of the gate fairly quickly. Courtesy of Ken Fisher, here’s a list of the returns in the first three and twelve months of S&P 500 bull markets since 1930: 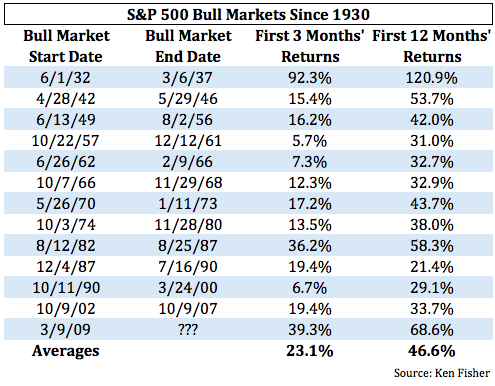 The moves in the markets listed above have already outpaced the three month averages in this table, but the declines were much worse than the majority of historical S&P 500 bear markets. I think it’s also possible that market moves are speeding up these days because of technology.

The point is that a bull market could start before investors are even aware of it. This past week Larry Swedroe discussed emerging markets in terms of their cyclical nature:

For the five-year period 2003 through 2007, while the S&P 500 Index returned 12.8% a year, the MSCI Emerging Markets Index managed to return 37.5%, outperforming by 24.7 percentage points a year. Looking at their total returns presents an even more dramatic picture: the S&P 500 Index returned 82.9% versus 390.8% for the emerging markets index. How quickly investors forget!

Instead, it’s about remaining disciplined and adhering to your asset allocation plan. That means having the courage to rebalance to your target allocations, buying what has done poorly and selling what has done well—and that’s something a lot of investors are unable to do on their own.

What Swedroe is preaching here is patience and discipline, not the ability to nail the bottom in a beaten-down market. Remaining disciplined or picking market bottoms are both extremely challenging but only one of them is a realistic investor goal.

It’s premature to say that Brazil or any other country or region is about to begin a secular bull market. No one can predict when these things will start or stop. Anything commodity or EM-related has headwinds and challenges these days. It’s very possible that the pain isn’t over in emerging markets and that these are just another set of huge head-fake rallies.

If you’re looking for an all-clear signal in the markets when trying to bottom fish you’re not going to get one. No one can time the bottom of a crashing market perfectly because market crashes are controlled by investor emotions that become amplified at the extremes.

Investors don’t have to try to pick exact bottoms in markets to be successful. If you’re invested in beaten-down segments of the markets it’s worth remembering that the gains will eventually come if you’re patient enough, but anyone invested in these markets in recent years will tell you that your patience will be tested.