We’re well into the seventh year of an economic and stock market recovery. The economic expansion hasn’t been as robust as many would like and the recovery has been uneven, as some have fared better than others in the aftermath of the worst economic contraction since the Great Depression. But you can’t deny that things are much better than they were during that fateful 2007-2009 period.

Many skeptics continue to believe that the entire recovery is artificial. A lot of this has to do with the emotional scars that a financial crisis can have on people. Take a look at this study from Allianz Global which shows that many baby boomers and Gen Xers are still very much affected by the crash in a number of ways: 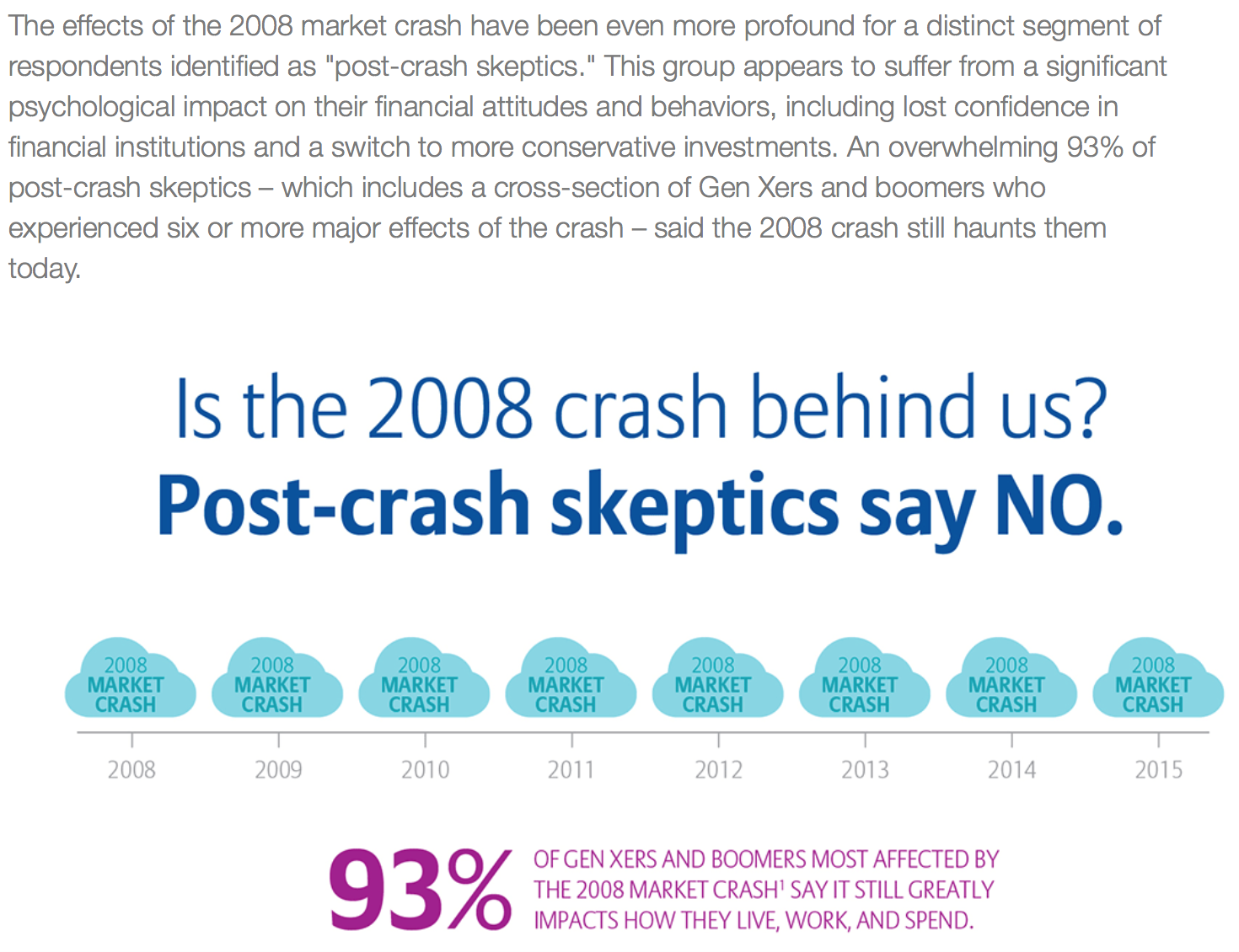 Like the Depression babies of the past it seems that a severe economic and market downturn have had a huge psychological impact on certain groups. Here are some more lingering effects from the financial crisis as I see them:

The media’s tone has shifted. The media is not going to get caught cheerleading the next bubble. No one wants to be remembered for the magazine indicator this time around. The media more or less missed the past crash (they weren’t alone). I get the sense that they’re not going to be fooled again even if that means that they will now automatically consider everything that goes up in price to be in a bubble. While the majority of newspeople and organizations were far too trusting of financial markets in the late-1990s and mid-2000s, it seems that the transformation is now complete in that a majority of them are now hardcore skeptics. They all want to call the top the next time around.

Investors do not want another boom-bust cycle. Sure, a few perma-bears seem to think everyone is euphoric again, but that’s mostly to keep with their narrative. I don’t see how you could conclude that investors have completely forgotten about the financial crisis. If anything, this could be the first forced bubble in history as no one really wants to go through all of that again so quickly. I’m not saying it won’t happen — as we’ve all seen, anything is possible — but I have a hard time believing that investors are euphoric at the moment. Even with the gains we’ve enjoyed since the 2009 lows it still feels like people have never fully bought into it from the get-go. Everyone seems to be waiting for another downturn to hit.

Bad news is still easier to believe. I wrote a post a couple weeks ago that showed how the stock market mostly goes up over time and if you extend your time horizon your odds of success improve dramatically. I’d say 9 out of 10 responses or comments I received were of the pessimistic variety saying this was unlikely to continue. This is completely anecdotal, but the investors I encounter are overwhelmingly negative about the long-term future of the economy and financial markets. People have a hard time believing good news and progress. Most people these days seem to assume the glass-is-half-empty.

Fed-bashing is now the 5th professional sport. There’s been a growing contingency in the financial community who’s sole mission, it seems, is to constantly bash every single move made (or not made) by the Federal Reserve. This group would love to live in a bizarro, counterfactual world where the Fed does the exact opposite of what they’ve actually done. It’s not just that they complain about the Fed on a weekly (or daily) basis; it’s that they take it so personally. They assume that all of their mistakes in the markets have been caused exclusively by Fed policy. There’s no need for personal accountability when the Fed makes for a perfect scapegoat.

Investors are quick to believe the end of the world is fast approaching. Look at this Larry Summers tweet from late summer after a minor stock market drop:

As a reminder, Summers was once on the short list to become head of the Federal Reserve. This was a fairly run-of-the-mill 10% correction. People act like every time markets begin to falter that the end is near. There will obviously be many future crises, but it seems as though investors assume we’re heading for a calamity whem markets begin to falter. The dot-com and real estate bubbles have conditioned investors to expect a system wide crash or recession every single time things stop going up.

If history is any guide I’ll probably receive a handful of comments and emails from people telling me that this post is a sure sign that markets are topping or getting frothy. My point is not to suggest that it’s time for investors to get all bulled-up on stocks and the economy. I’m not making a market call here.

My point is to show how our views and decisions can be affected by our past experiences in the markets. For some this means learning from past mistakes and improving their decision-making process. For others it only ends up compounding their problems as they’re never able to let go of the bunker mentality.