“Simplicity has a way of improving performance through enabling us to better understand what we are doing.” – Charlie Munger

Tren Griffin tells a great joke in his new Charlie Munger book that describes the needless complexity many intelligent people try to inject into the decision-making process:

Too many people take a situation and create complexity where none is needed. Take, for example, the old joke about unnecessary complexity at the National Aeronautics and Space Administration (NASA). The storyteller starts by saying that early in the space program NASA discovered that ballpoint pens would not work in zero gravity. NASA scientists spent a decade and huge amounts of money developing a pen that wrote not only in zero gravity but on almost any surface, at extremely low temperatures, and in any position of the astronaut. The punch line is: the Russians instead used a pencil.

The first thing that popped into my mind when reading this was that the majority of institutional investors act like NASA in this situation. They take the complicated route to try to solve a problem without even considering the simple one that’s staring them right in the face.

I was at an industry conference in 2010 with a large number of foundations and endowments in attendance. The chief investment officer for a well-known university with a very large endowment fund was giving a presentation on how they had changed things up following the 2007-09 crisis. Many of these multi-billion dollar funds were stuck in illiquid investments and had to scramble to find sources of liquidity to pay for their share of the operating expenses during the crash.

This CIO described a fairly complex tail-hedging strategy that their team had come up with so they wouldn’t run into the same problems during future meltdowns. The university’s spending policy required a minimum of 3-4% of the endowment’s market value for annual spending needs. So let’s say this was a $10 billion fund. Their annual spending amounted to $300-$400 million and they wanted that amount to be available in the event of a market collapse.

We were told the the annual cost of implementing this tail risk program was in the range of 70 to 100 basis points. So it wasn’t exactly cheap, but they were willing to accept that cost for the comfort of knowing they were hedged. He didn’t go into the exact details, but from the sounds of his description it was something of a Nassim Taleb black swan fund. They had things all calculated out so if another 2008-type event occurred in the future, this hedge would provide the $300-$400 million they needed.

You have to remember, at that time, many people were sure that the markets were going crash again very soon. Everyone was still operating under a bunker mentality. Tail risk funds became one of the hottest selling strategies as the generals of these funds were all busy fighting the last war. So all of my peers in the institutional community in the audience were furiously scribbling in their notepads with questions and ideas about how to implement this type of thing themselves or through an outsourced manager.

At the same time I was doing some back of the envelope calculations. The fund was willing to pay close to 1% per year, or around $100 million, to hedge their annual spending needs. Since they only needed 3-4% of the portfolio to accomplish their goal, that means if the 2008 scenario didn’t come into play once every 3-4 years or so, this would be a a money losing hedge.

Costs aside, my next thought was this — if this fund knew their exact pain threshold — again $300-$400 million — why not just keep that amount of money in ultra safe securities? They could put it in intermediate or even short-term treasuries, some of the safest, most liquid securities in the world. Treasuries have also historically provided a flight to safety premium when the equity markets crash. They would be giving up on other potential investment opportunities, but they would have given themselves peace of mind by knowing that their disaster scenario would be covered.

Also, they were paying almost as much for the hedge as they required for spending needs.

One of the things that has always amazed me about professional investors is that complexity tends to be their default choice. Many assume that a complicated approach must be the right one because it sounds more intelligent. When I started my career I was the same way. The intelligent-sounding solutions and investors impressed me the most because I didn’t understand how things really worked.

When I was finishing up my book, the editors at Wiley gave me three different cover options to choose from. The only one with a graphic included this picture on the front (which is the one we ended up using): 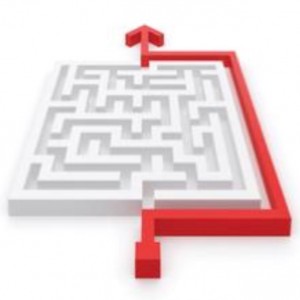 So many investors choose to subject themselves to the maze of complexity and impossible decisions. They never stop to consider that there could be an easier route. Maybe the hedging program instituted by that endowment fund will do the trick. You never know. But the point is that they likely never even considered that there was a much simpler way of protecting their spending needs, literally the reason their fund exists in the first place.

Every single great investor or business person I’ve read about over the years discusses the importance of simplifying in order to succeed. Yet the majority of investors are constantly looking for ways to make things more complex and complicated.

Further Reading:
Your Very Own Black Swan Strategy
Advice Doesn’t Have to be Complicated to be Good

And here’s the stuff I’ve been reading this week:

And in case you missed it, here are some of the posts and articles about my big career move this week: