Isaac Presley wrote a nice market update recently on his Cordant Wealth Partners blog. He broke down stock and bond yields by comparing some real (after-inflation) and nominal indicators to show where they currently stand in relation to their historical averages and ranges.

Here’s the 10 year treasury yield going back to the early 1950s: 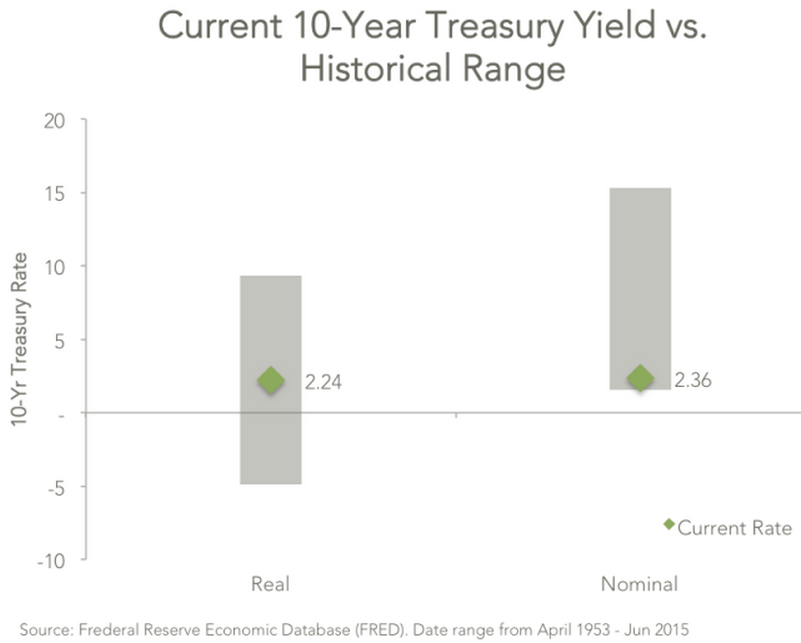 And this is the earnings yield (the inverse of the P/E ratio) on stocks: 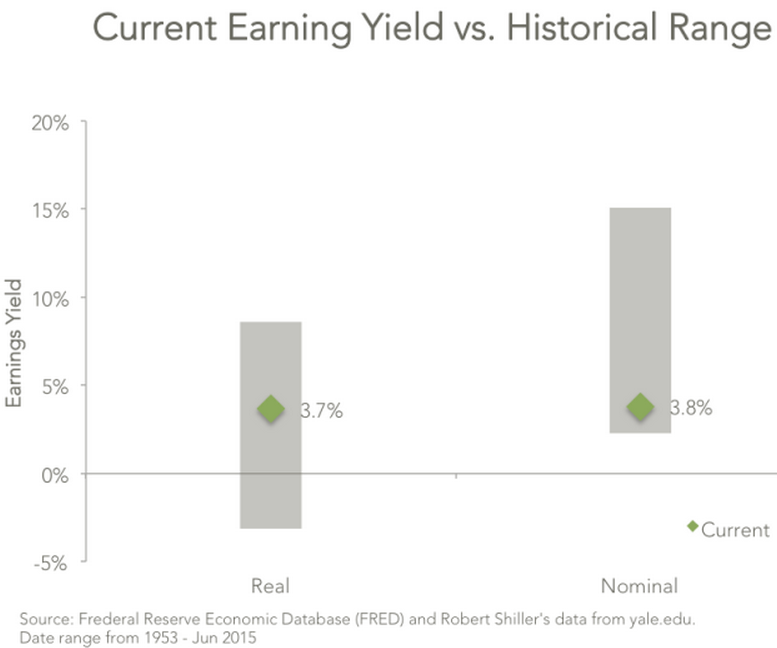 You can see in both examples that the markets have dangerously low nominal yields compared to their historical ranges over the past six plus decades. According to Isaac, nominal bond yields have been higher than the current rate 96% of the time while nominal stock market yields are in the highest 10% of historical valuations. This is an obvious cause for concern as lower yields and higher valuations tend to lead to lower returns, on average.

But if you look at these measures on a real basis, they are actually both right in line with their long-term averages because inflation is so low at the moment. On a nominal basis things look scary. On a real basis, not so much. So which value matters more? That depends on whether or not inflation and/or yields pick up in the future and the magnitude of those moves in relation to expectations. As usual, things are not always as easy as they appear on the surface.

But Isaac’s piece did get me thinking about how inflation has impacted market returns over the years. Using historical data from Professor Damodaran, I took a look at the returns on stocks, bonds and cash (S&P 500, 10 year treasuries and 3 month t-bills) going back to 1928 and separated them out by different annual inflation rate rates:

It’s interesting that the sweet spot for inflation has been in the 0-2% range, which happens to be where we’re at currently. But you should also notice that stocks have really struggled in a highly inflationary environment, which occurred mostly the 1970s and WWII years.

Now, as we saw in the yield examples above, you can’t compare historical averages without taking inflation into account. Historical market comparisons are always difficult because no two cycles are the same, but it’s even that much harder if you don’t take inflation into account across different time frames. Here is the same data presented with after-inflation returns:

Note how drastically different many of these numbers are when you take inflation into account. All of the returns go negative in the highest inflation environments. And the deflationary returns are much better than they appeared at first glance on a nominal basis because deflation actually adds to the real returns.

The real cash returns are another reminder that high yields are largely illusory, because even in those higher nominal yielding decades, most, if not all, of the returns are eaten up by inflation. Again, low inflation looks to be the sweet spot. As inflation rises, average stock returns fall. Bond performance was much more steady until you hit very high levels of inflation, which makes sense since inflation is one of the biggest risks of a fixed interest payment investment.

Inflation is something of a conundrum in the grand scheme of things because too much of it appears to harm financial market returns. But on the positive side of the ledger, inflation usually means rising wages, which hopefully means people can save more money with an increase in income (although things will also cost more).

It’s very difficult to predict when inflation will pick up again, but it’s worth planning for considering we’ve seen inflation of 4% or more roughly one-third of the time over the past 90 years or so. In a future post I’ll cover how investors could potentially protect themselves in the event that inflation eventually picks up.