Mohamed El-Erian, the former PIMCO CEO, wrote a piece for Bloomberg View questioning the merits of emerging markets as an asset class. Before making his argument, El-Erian laid out three characteristics of an asset class, which I’ve paraphrased:

Here were his takeaways for each:

EM has grown markedly since its relatively modest beginnings, and it now contains far too much diversity to meet the first requirement of shared characteristics. It no longer qualifies for the second criterion, especially now that the comments and actions of a single policy-making body, such as the International Monetary Fund, don’t move markets as they once did. The third characteristic — the propensity of investors to look at such an asset class as a unit rather than as the sum of its parts — still plays a role, giving rise to interesting dynamics.

He’s provided some interesting food for thought, but I generally look at the definition of an asset class differently than this. This is what I look for in an asset class:

Do emerging markets still fit the bill here? I think so.

The MSCI EM Index is made up of countries in Asia, Europe, Africa and Latin America. With developing economies I think this type of diversity among regions is a positive since it’s difficult to know which countries will make the leap and which ones will be left behind.

The reason investors diversify is to gain access to a number of different return streams, but it’s also about providing a diversification of risk. Here are the past decade’s worth of annual returns for the S&P 500, the MSCI Emerging Markets Index and the MSCI EAFE: 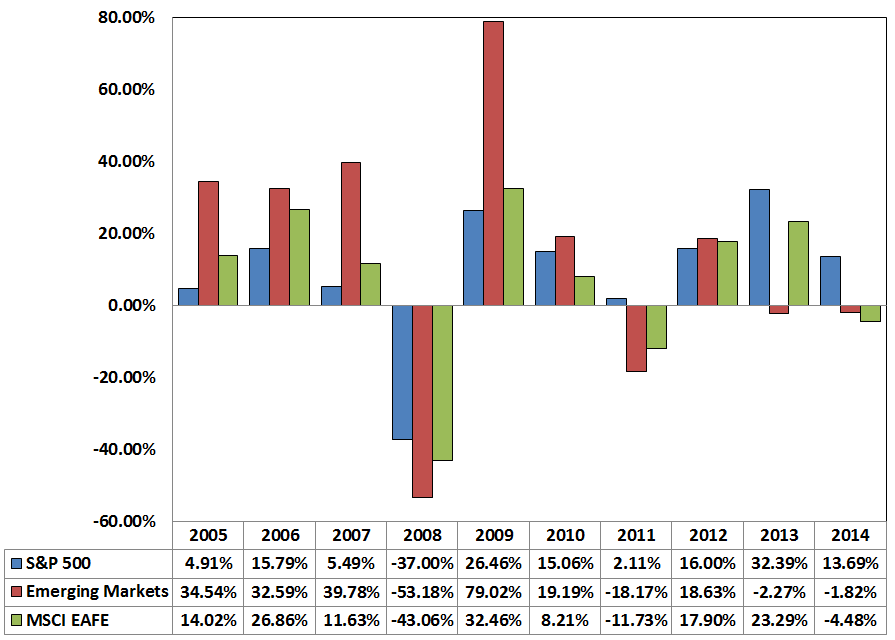 Emerging markets have outperformed both the S&P 500 and the MSCI EAFE over the past 10 years ending in 2014 but they did so with almost double the volatility. In a feast of famine fashion, emerging markets provided a nice boost to returns in the mid-2000s, were the big losers in the 2008 crash, led the recovery in 2009 and have since lagged developed markets. The diversification benefits are apparent from these performance numbers.

Investors would love to be able to find perfectly negatively correlated assets classes, but they just don’t exist. Most financial markets will show some positive correlation with one another over time, but this is a good thing because markets rise more than they fall. Here is the rolling 36 month correlation over the past decade between the MSCI Emerging Markets Index and the S&P 500: 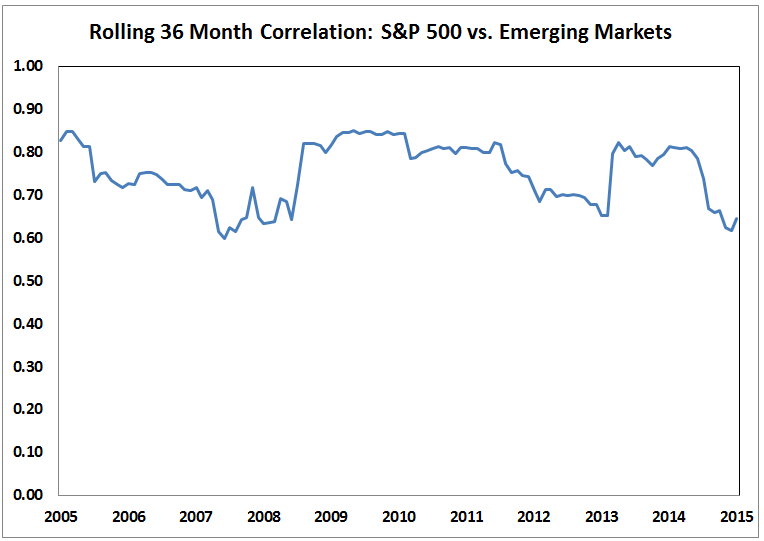 While it never comes close to going negative, you can see the correlation between the two asset classes is constantly changing. This is what you want to see between assert classes in a diversified portfolio. It allows investors to take advantage of volatility by rebalancing or putting new savings to work at lower prices in some parts of their portfolio.

If you look at total world stock market fund, emerging markets make up roughly 10% of the total market cap. Yet emerging markets now make up closer to 40% of world GDP. You could try to pick the winners and losers from this group, but it’s not going to be easy. Remember when everyone was convinced the BRICs were the hottest place to invest? The biggest BRIC ETF (ticker: BKF) is down almost 32% since its 2008 rollout. The simple Vanguard EM Index ETF (VWO) is down less than 8% since then. That’s an outperformance of 4.2% per year.

Most professional investors benchmark their foreign stock allocation to the MSCI EAFE and then break down their funds or stocks further by region or country. But from an overall asset class perspective, this is still the benchmark the majority of investors choose to follow. I don’t see this changing anytime soon.

I think the same applies for the broader emerging markets. EM offers a diversification of risk, returns, economic growth, geographic regions and investor appetite for risk. Some of these countries and regions will outperform. Certain investors will be able to pick the winners. Many will fail. A broad, diversified approach is still probably the best option for the majority of investors that don’t have the skill-set or expertise to be able to analyze the different emerging market countries.

Emerging markets will continue to go through periods of extreme volatility. There will be future crises, currency problems, inflation and recessions. This is par for the course. If you’re willing to accept how emerging markets behave, I still think they represent an asset class in a diversified portfolio.

Some investors can’t handle EM as an asset class and that’s okay too. But I think there are going to be a ton of opportunities in the years ahead as these countries mature.