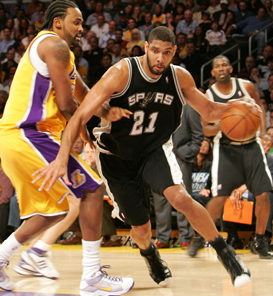 Tim Duncan of the San Antonio Spurs is arguably the greatest power forward in NBA history. Unfortunately, success puts a target on your back when it comes to financial advice. It was recently discovered that Duncan has joined the long list of rich people that have been taken advantage of through lousy investments or shady advisors. Bloomberg outlined how much money Duncan was taken for:

San Antonio Spurs 15-time All Star Tim Duncan lost more than $20 million to bad investments at the center of a lawsuit filed Friday against his ex-financial adviser, a person familiar with the matter said.

“Over the course of 17 years, I invested in a series of opportunities presented by Charles Banks, on his assurance that we were working together for my family’s long-term financial security,” Duncan said in a statement. “Banks exploited my good intentions and our relationship for his personal gain and my substantial loss. I’m saddened that my name will join the list of athletes to fall victim to this sort of misconduct.”

Duncan, 38, said he met Banks during his rookie year in 1998. At Banks’s urging, the athlete invested several million dollars in hotels, beauty products, sports merchandising and wineries that the adviser owned or in which he had financial stakes, according to the filing.

A similar fate happened to the NHL’s Jack Johnson of the Columbus Blue Jackets earlier this year:

On the morning of Oct. 7, two days before the Blue Jackets opened the 2014-15 season, Jack Johnson left his Ferrari parked in the garage of his Dublin apartment and drove his BMW to a federal courthouse Downtown to file for bankruptcy.

Johnson has earned more than $18 million during his nine-year NHL career, not including the $5 million he will be paid this season by the Blue Jackets.

Almost all of the money is gone, and some of his future earnings have already been promised — which is why Johnson, surrounded by a new team of financial advisers and an attorney, signed his financial surrender.

The scene was nearly four years in the making, after a string of risky loans at high interest rates; defaults on those loans, resulting in huge fees and even higher interest rates; and three lawsuits against Johnson, two of which have been settled and one that’s pending.

Why does this happen, not only to professional athletes but to many wealthy investors?

It’s difficult to find legitimate sources of financial advice that have your interests in mind, especially when you have a large bank account. There are even more opportunities for mis-steps when you make millions of dollars because everyone thinks they have the perfect investment idea for you. Instead of hearing sound financial advice, the wealthy often have to deal with people trying to impress them to get between them and their money.

The biggest lesson here is that becoming wealthy doesn’t excuse you from paying attention to your finances.